Opinion | Iowa’s victory over Kent State wasn’t always pretty, but a win is a win

The Hawkeyes were sloppy at times against the Golden Flashes. But hey, they still won by 23 points. 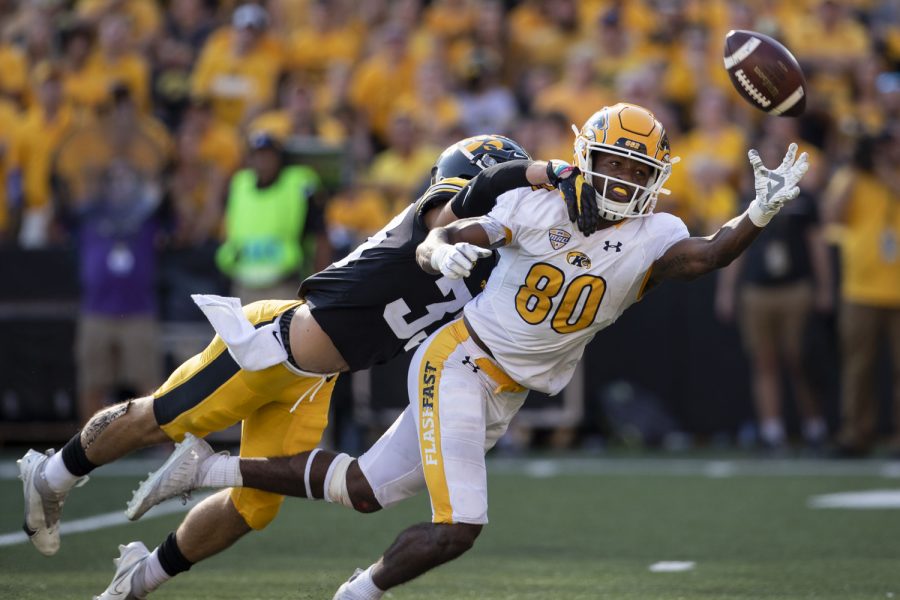 Kent State wide receiver Keshunn Abram attempts to catch a ball during a football game between Iowa and Kent State at Kinnick Stadium on Saturday, Sept. 18, 2021. The Hawkeyes defeated the Golden Flashes with a score of 30-7. Abram had 138 yards and one touchdown.

The No. 5 Iowa football team only looked fine in its 30-7 win over Kent State at Kinnick Stadium on Saturday. And that’s fine.

Not every game is going to be a convincing victory over a top-20 opponent. After a four-touchdown win over Indiana to open the season and a commanding triumph over Iowa State in Week 2, Iowa’s matchup with Kent State seemed destined to be a letdown. And, in a way, it was.

The Hawkeyes won by 23 points, but they didn’t look sharp doing it.

“If anybody was watching,” Iowa coach Kirk Ferentz said postgame on the Big Ten Network, “we’ll probably be [ranked] 15th this week, based on what I saw.”

That’s probably a bit of an overreaction.

Iowa did some good things against Kent State. But, more so than in the first two games of the season, it did some underwhelming things, too. Let’s get those out of the way.

Senior running back Ivory Kelly-Martin averaged 6.8 yards per carry as Iowa’s No. 2 rushing option, but was sent to the bench after fumbling twice.

Iowa’s vaunted secondary looked human at times against Kent State’s fast-tempo offense. Senior cornerback Riley Moss, who ran back two interceptions for touchdowns in Week 1, gave up a handful of chunk plays against the Golden Flashes, including a 48-yard completion. By the way, making chunk plays downfield in the passing game is something Iowa’s own offense still hasn’t really accomplished, although quarterback Spencer Petras did connect with Nico Ragaini for a 48-yard gain.

“We’ve said it a million times,” Petras said, “We have a young team, especially on offense, and if we’re improving every week, which I think we did today, then I’m happy and that’s all we can do. It’s a long season — it’s a long road. But we just need to keep chopping away.”

Overall, the Hawkeye passing attack was ultra-conservative against Kent State. It looked like Greg Davis was back on the coaching staff. Petras was fine, completing 25-of-36 passes for 209 yards and a touchdown. Plus, he didn’t turn the ball over.

Yet Petras still looked uneasy, and it appears Iowa’s offensive coaching staff is hesitant to allow the second-year starter to throw much downfield. And when he was looking downfield, Petras missed receivers on throws that even Ferentz admitted should’ve been made better.

And as long as we’re detailing the negatives, eight penalties for 72 yards won’t do Iowa any favors in close games.

“At the end of the day, there’s a lot of things that we can clean up for sure, especially on the defensive side,” Moss said. “We still haven’t, and we talked about this after the game, we still haven’t played a perfect 60-minute game. So, in my eyes and in the defensive guys’ eyes, that’s very exciting because we are very excited to grow and get better each week. We’re going to look at the film and figure out what went wrong with some stuff and turn it around.”

It wasn’t always great to watch, but it wasn’t all negative against Kent State.

Kyler Schott made his return to an Iowa offensive line that seems to be coming together and allowed running back Tyler Goodson to run for a career-high 153 yards and three touchdowns. The defense scored more points (this time via a safety) and forced another turnover. And Iowa’s defensive line, a unit with a question mark by it coming into the season, registered seven sacks — the team’s most since 2000.

Not everything was pretty against Kent State. And that’s OK. It’s only natural for there to be a little bit of a letdown against a MAC team after two emotional victories to start the season.

“I don’t know how good we are,” Ferentz said. “We’ll figure that out three months from now. But I like the guys we work with.”

As he should. There’s plenty to clean up, but still a whole lot to be optimistic about.