The Hawkeyes swept Incarnate Word in the first match of the weekend, but fell to Air Force and Denver. 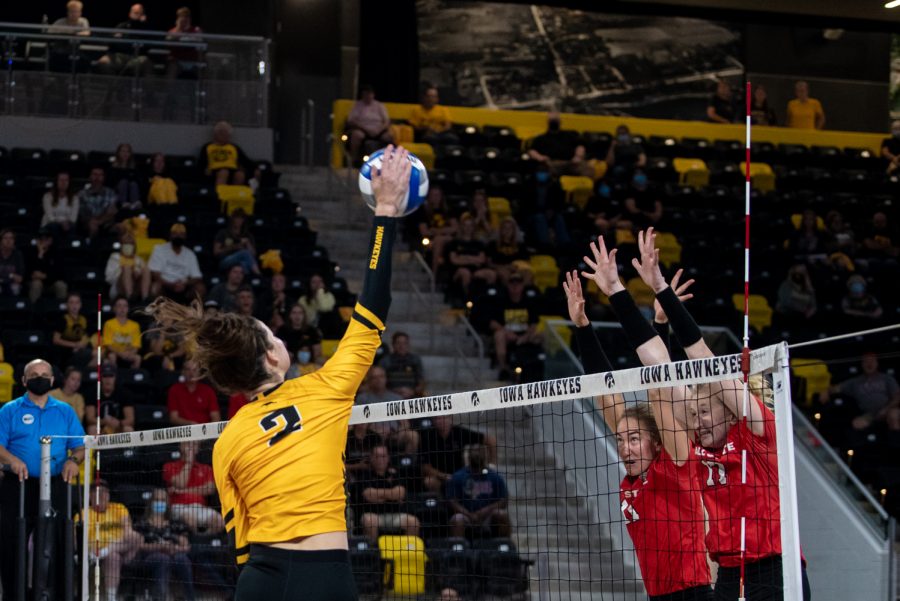 Right side Courtney Buzzerio goes for a kill against two Ball State blockers during the volleyball match between Iowa and Ball State on Friday, Sept 10, 2021. The Cardinals defeated the Hawkeyes 3-2.

Iowa was efficient on the offensive end, boasting a .308 attacking percentage against Incarnate Word. Senior outside hitter Courtney Buzzerio paced the Hawkeyes with 16 kills.

On Friday night, Air Force defeated Iowa in five sets. The match went back and forth the entire contest, but the Falcons pulled away in the fifth set, hitting .583 to overcome the Hawkeyes.

Sophomore setter Bailey Ortega was a spark plug for the Hawkeyes against the Falcons as she set a career-high 57 assists.

In the final match of the tournament, Denver swept the Hawkeyes.

Senior middle blocker Hannah Clayton led the Hawkeyes with a hit percentage of .667.

But Iowa’s defensive struggles continued as the Hawkeyes had their hands full with Denver’s scrappy style. Senior libero Maddie Slagle notched eight digs for the Hawkeyes.

Heading into conference play, the Hawkeyes are 2-8 on the season.

Iowa has been improving on the offensive end throughout the season, finishing with a .583 hit percentage against Incarnate Word.

The Hawkeyes have made it a priority to distribute on offense, as junior outside hitter Kyndra Hansen joined Buzzerio in double-digit kills against Air Force Friday night.

But Iowa will need to improve on the defensive end to become competitive in conference play. Slagle and UCLA transfer libero Mari Hinkle only recorded double-digit digs against Air Force Friday night.

Dating back to the Cy-Hawk Series Tournament against Iowa State, the Hawkeyes won seven straight sets before dropping the second set of their match against Air Force Friday.

Iowa routed rival Iowa State, 3-0, for its first win of the season last weekend, and continued the momentum in a sweep against Incarnate Word.

Buzzerio has been a force for the Hawkeyes so far this season, notching double-digit kills in every match so far this year.

The senior from Chino Hills, California has been the main source of production on offense for the Hawkeyes with 182 kills.

Iowa’s match against Denver was its final nonconference match of the 2021 season.

The Hawkeyes open conference play on Wednesday against Illinois at Xtream Arena.

The Illini are 8-3 so far this season, coming off a three-match victory at The Red Bird Classic at Illinois State.

The Illini did not lose a single set, sweeping Missouri, Illinois State, and North Texas.

Illinois is led by sophomore outside hitter Raina Terry, who has 130 kills. The match will begin at 6 p.m. at Xtream Arena and will air live on Big Ten Network.