The Hawkeyes scored two goals about a minute apart in the second half to win their Big Ten opener in Iowa City. 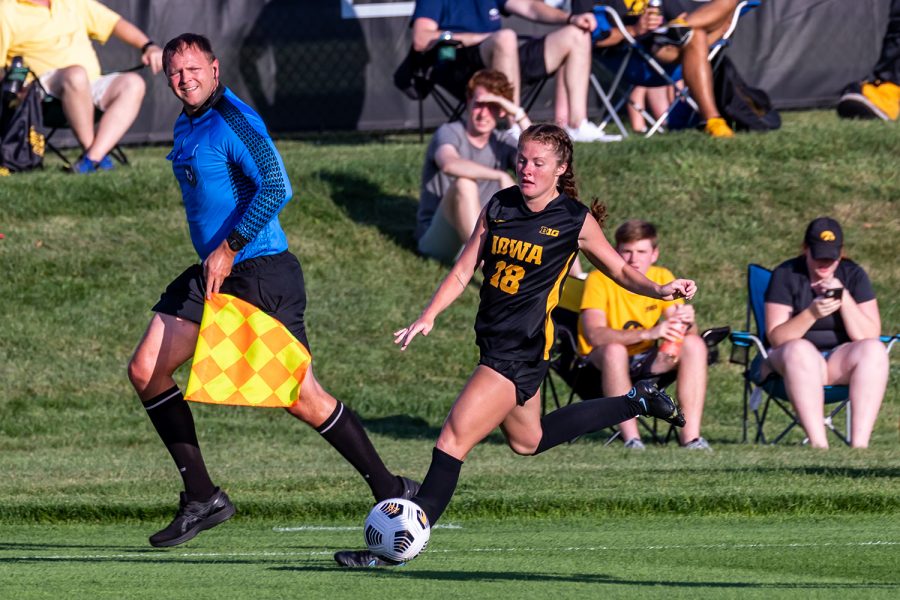 When Northwestern struck with the first goal in the 61st minute of Iowa’s Big Ten opener at the Iowa Soccer Complex, the Hawkeyes knew how to defend its home field.

One minute later, sophomore midfielder Maggie Johnston found the back of the net off a free kick pass from senior forward Samantha Tawharu, leading Iowa to a 2-1 victory Sunday.

“I feel like it was pretty hard to miss,” Johnston, who started her first match of the season, said. “It was a really good ball by [Tawharu] across the middle so it was just an easy touch right into the goal, back of the net.”

Johnson added the Hawkeyes realized they had to come back with more intensity after the sole Wildcat goal.

Hawkeye head coach Dave DiIanni said he thought his team played well in the first half, but missed chances to capitalize.

DiIanni was also impressed with how the Hawkeyes increased their pressure in the second half.

“I really liked how we played,” DiIanni said postgame. “I thought the game was going to come down to the midfield, and I thought our midfield outplayed theirs, but what a tight Big Ten game that was.”

Powell is also confident in Iowa’s strong midfield, but she thinks the Hawkeyes need improvement on the offensive attack.

“I think being more confident in the attack and get more shots on goal, I think that will help us win more games,” Powell said.

The 7-1-1 Hawkeyes won their first game against Northwestern since 2014, and earned three points in the conference standings.

Early points could be key, as only eight of 14 teams make the Big Ten tournament. DiIanni said postgame that the Big Ten is the deepest he’s seen since he started coaching at Iowa in 2014.

Roling checked in midway through the first half, nearly getting the ball past Wood in the 35th minute.

In 53 minutes of action, she had two shots on goal and three fouls. Roling is tied for the team with four goals.

The Hawkeyes will continue their Big Ten slate with a two-game road trip. Iowa will play at Indiana on Thursday at 7 p.m. and then travel to Purdue for a match next Sunday at noon.

The Hoosiers are 6-2-1 overall and lost their first Big Ten match against Michigan State, 1-0.

Purdue is 6-1-2 and defeated Nebraska, 3-1, on Sunday. The Boilermakers will play at Illinois on Thursday.

The Hawkeyes lost at Indiana, 2-0, and defeated Purdue, 1-0, in Iowa City last season.