Herky the Hawk brings magic back to the UI

Herky the Hawk and his programming is back in full swing for this academic year after virtual recruiting and training because of COVID-19. 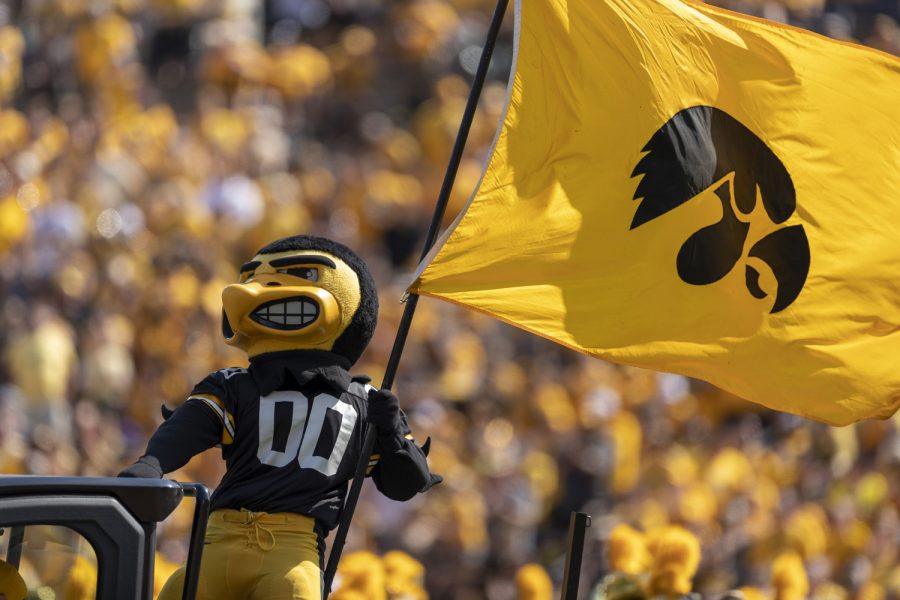 Herky enters the field before a football game between Iowa and Kent State at Kinnick Stadium on Saturday, Sept. 18, 2021.

Herky the Hawk, the University of Iowa’s mascot, had some challenges to overcome as this year’s football season began.

Herky and his security team spent the time away from in-person events in 2020 and 2021 increasing his social media presence, Herky Mascot Coach Alex Kern said.

Because there were no in-person events last year, Herky and his team were in a unique position at the first home game this year, Kern said.

“We got to this football season and no one on the Herky Security [team] had been to a Hawkeye football game before,” Kern said.

Training to be a part of the Herky Security team, the name for the group of students that act as the mascot’s “helpers,” on a home game day can only be taught so much, as being on field can be chaotic, Kern said.

“I prepared them as best I could, but you can only be so ready for the chaos that is a football game,” Kern said. “I can try and tell them exactly what we need to do, but of course, once you get to that situation, something is going to be a little different.”

Other spirit squad members, such as the cheer and dance teams, had a similar problem, said UI Spirit Coordinator Greg Niemiec.

“We went into last Saturday’s game with none of them having ever been in Kinnick in front of live people,” Niemiec said.

Students must try out for the Herky Security team, usually around spring break.

Tryouts have taken place virtually for the last two years because of the COVID-19 pandemic, Kern said.

“During COVID we had to switch over and do informational meetings, do try outs, do everything all over zoom,” Kern said. “That was a new challenge, just trying to do try outs with these people that we want to test their creativity and stuff over Zoom.”

The new members of Herky’s Security team typically learn from older members. Because many members have graduated since the last normal season, Kern said, there was a lack of knowledge of the program.

“The team ran pretty well with the seniors on the team — people that had three or four years of knowledge able to teach the younger people on the team,” Kern said. “Just losing that institutional knowledge of what to do in any situation, it was a big challenge to get over.”

The main thing the team looks for during tryouts is creative thinking, Niemec said.

A common exercise used to measure the creativity of those trying out is by having a student mime with an object in their room like a water bottle or brooms, Kern said.

“You’d be amazed what a broom could turn into,” Niemiec said.

There is a physical demand that comes with being Herky as well, Kern said.

“Keeping up with Herky is tough — he is a very active bird,” Kern said. “He’s always got something to do.”

Herky the Hawk has been around since 1928, according to the university’s website. During that time, the mascot has seen a lot of changes, one being the program he is housed under.

Years ago, Herky was housed at the UI fraternity, Delta Tau Delta, said John Lohman, a member of the Herky program in 1993.

When Lohman worked as Herky, he said fans always wanted to interact with him.

“Everyone wants to meet you and shake your hand,” he said.

Delta Tau Delta, however, was eventually removed from campus after its charter was pulled by the international office for flagrant drug and alcohol violations, as The Daily Iowan reported in 1999.

“They used to be a part of a fraternity and the fraternity was removed from campus,” Niemiec said. “They came under athletics after that fraternity left campus.”

Because Herky could not attend any of these events during the 2020 – 2021 school year, Kern said fans who saw him around campus were excited.

“The students that come through, they bleed black and gold and they’re excited to be Hawkeyes,” Niemiec said. “We are excited to lead them.”