Petras found his rhythm against Kent State and continued to play turnover-free football. 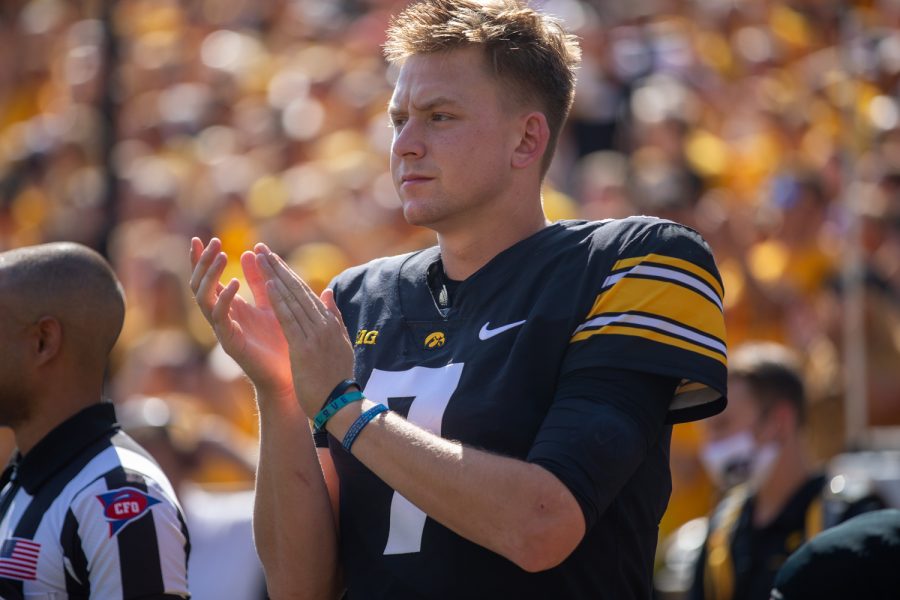 The second-year starter completed just two of his first five attempts, and at times scrambled outside of the pocket and threw passes over the heads of his receivers to escape the dynamic Golden Flashes’ defense.

“There were a couple throws, I’m sure he would tell you the same thing, that you’ve got to make that throw,” head coach Kirk Ferentz said. “That’s the next step. But that’ll come. That’ll come. I think maybe he’s pressing a little bit too hard at times. That’s just my unprofessional opinion, because I’m certainly not an expert on quarterbacks, but I think sometimes he might be trying a little too hard.”

Despite Ferentz’s inexpertise on quarterbacks, Petras settled in after a rocky first quarter. Overall, Iowa collected 418 total yards of offense against Kent State on Saturday, and Petras completed 25 of his 36 attempts for 209 yards for a touchdown and no interceptions.

With Iowa seeking to extend its lead going into halftime, the quarterback led the Hawkeyes through a 20-play, 95-yard touchdown drive that took up eight minutes and 38 seconds of the second quarter.

The 20-play drive was the longest in the Ferentz era, and its longest scoring drive since 2003 — when the Hawkeyes mustered up 18 plays against Illinois.

“It was a really good drive,” Petras said. “And, you know, it was a solid run game, a solid pass game, everything showed up, it was, you know, all 11 guys working hard, so that was a great practice.”

Petras utilized seven different players to march down the field — including a six-yard pass to true freshman Arland Bruce IV for his first career catch in the Black and Gold.

Junior running back Tyler Goodson accounted for 25 of the Hawkeyes’ 95-yard drive, en route to a 153-yard rushing game — a career high for Goodson.

“It’s kind of illustrative in a lot of ways of what it takes to be a good offense,” Ferentz said. “It’s just concentrating play after play, not worrying about trying to make the big play, and I think sometimes I get the feeling standing there we’re trying to force things a little bit too much sometimes, and that’s — you want a player to try to do his best, but just let things kind of play out, and it’s the same way on defense.”

The final play culminated in a five-yard pass from Petras to junior tight end Sam LaPorta with nineteen seconds left in the second quarter.

In a tight window, Petras caught LaPorta on a dive shallow in the end zone for the Hawkeyes’ second touchdown of the matchup.

“We made some tough plays during that possession,” Ferentz said. “Even Sam’s touchdown catch was — that wasn’t a big window right there, but Spencer got the ball in there and he made the catch. So that was really good. Those are the kinds of things that will help build a team if we take advantage of it.”

For the Hawkeye defense — one that dealt with a high-powered Kent State offense running plays every 10-15 seconds — it was a welcome break from the field.

“We weren’t on the field very much that second half,” senior cornerback Riley Moss said. “Which is nice because we get a break and, you know, they’re gonna go down and score. So, it’s always nice when the offense is able to put together a big drive like that, a big, long drive, and run the clock out.”

The 3-0 Hawkeyes will take on Colorado State — part of the Mountain West Conference — at Kinnick Stadium Saturday at 2:30 p.m.