The Hawkeyes looked sloppy at times, but their report card is still pretty stellar. 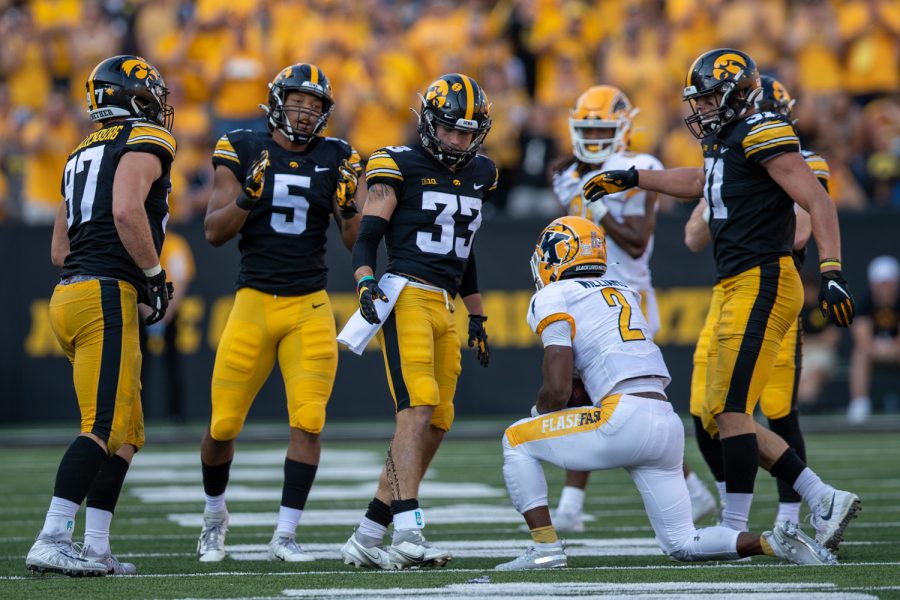 Iowa defensive back Riley Moss looks down at Kent State running back Xavier Williams during a football game between Iowa and Kent State at Kinnick Stadium on Saturday, Sept. 18, 2021. The Hawkeyes defeated the Golden Flashes 30-7. (Jerod Ringwald/The Daily Iowan)

Daily Iowan Pregame Editor Robert Read graded Iowa’s performance in all three phases after the Hawkeyes’ 30-7 win over Kent State.
Offense — B-
Giving the ball to Tyler Goodson always seems like a good idea. It definitely was on Saturday.

The junior recorded career-highs with 153 rushing yards and three touchdowns. Iowa’s offensive line looked as good as it has all season, perhaps in part because Kyler Schott returned to the rotation. The team totaled 448 yards of offense and scored four touchdowns on the day (A Spencer Petras-Sam LaPorta connection being the other). An inability to go downfield in the passing game and two fumbles by Ivory Kelly-Martin sank the offense’s grade a little bit.
Defense — A-
Iowa’s secondary is human, after all.

The Hawkeyes allowed a 48-yard play in the passing game on the same drive it would later give up a passing touchdown. But the Golden Flashes didn’t accomplish much else. Iowa’s defense scored on a safety, forced a turnover at its one-yard line, and tallied seven sacks. You know your defense is really good when that only gets you an A-minus.
Special teams — A
There’s not really anything to complain about from Iowa’s special teams play.

Punter Tory Taylor averaged 51.5 yards on his four punts, and Terry Roberts led the way on Iowa’s excellent coverage team. Kicker Caleb Shudak didn’t get to attempt a field goal, but made all of his extra points. And Kent State kept the ball away from return man Charlie Jones with short/directional kicks because of how dangerous he is with the football, which set Iowa up in good field position throughout the day.