A crowd of Republicans rallied around Miller-Meeks midterm reelection campaign as she was endorsed by fellow Iowa Republicans and the Arkansas Senator. 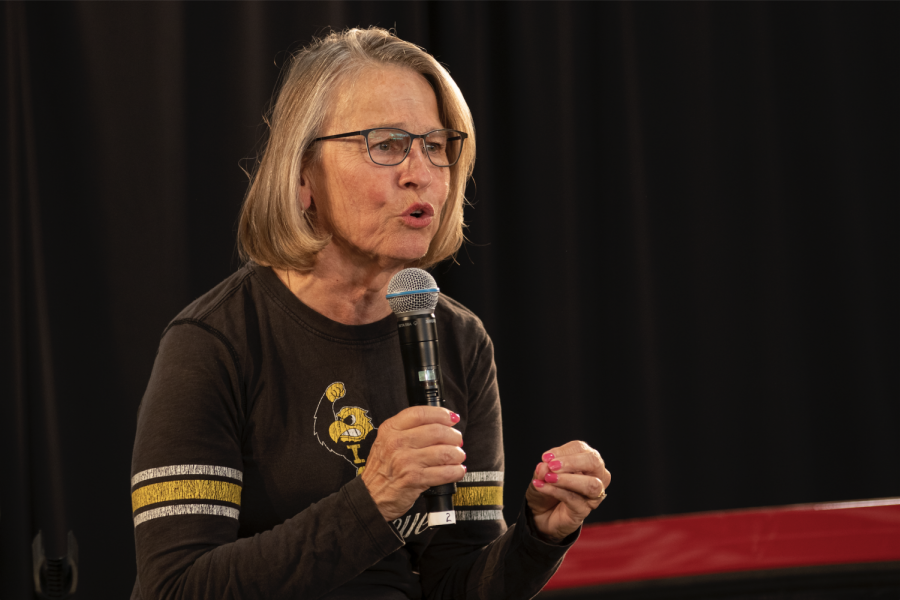 Rep. Mariannette Miller-Meeks addresses a crowd on Sept. 18 at her inaugural tailgate, where she criticized President Joe Biden's vaccine mandate for millions of workers, the Afghanistan withdrawal, and the border crisis.

“I think it’s fantastic, as fellow veterans and people that came from very humble circumstances, it really is inspiring to hear Tom Cotton, but also to have his support as we go into this reelection,” Miller-Meeks told The Daily Iowan.

Miller-Meeks was elected to represent Iowa’s 2nd Congressional District in 2020, beating Democrat Rita Hart by six votes. She spent 24 years in the Army as a private, nurse, and doctor and served as the Director of the Iowa Department of Public Health from 2010 to 2014. She represented Senate District 41 for a partial term before resigning to serve in the U.S. Congress.

“I know she had such a huge landslide victory last year, but when you win by just six votes, that sometimes will put a target on your back, for [House Speaker] Nancy Pelosi and the Democrats in Washington,” Cotton told the crowd. “They’ll see this congressional district as one of their top targeted races all around the country.”

He said Miller-Meeks must be doing something right, and told the attendants to help her in the next 14 months to secure another term in the House.

“This is a team sport, what we do as Republicans, fighting for those conservative values is a team sport. And I’m so proud to be on a team with [Rep.] Randy [Feenstra], and my great friend Mariannette Miller-Meeks,” said Rep. Ashley Hinson, R-Iowa.

Hinson announced her reelection campaign three weeks ago in a similar fashion, with Sen. Ted Cruz, R-Texas, as her star speaker.

With national politicians coming in the state to endorse Iowa’s congressional delegation, attendants are thinking about the 2024 presidential race in addition to the midterms.

“I think we heard the first speech of the 2024 presidential campaigns today,” Karen Fesler,  events chair and caucus co-chair for Johnson County Republicans, told the DI, in reference to Cotton.

Matt Whittaker, Former Acting United States Attorney General, instructed the crowd to vet the candidates who come through in 2024 and support the most electable conservative.

Keith Caviness, 80, lives in the same town as Miller-Meeks, Ottumwa, and has dinner with the Congressperson and her husband frequently. Keith’s wife, Trudy Caviness, is the Chair of Wapello County Republicans. He was sporting a “Trump 2024” hat and said he supports the former President Donald Trump’s accomplishments.

Phil Hemingway, former Iowa City Community School Board member and the Republican candidate in the Johnson County’s Board of Supervisors June 2021 special election, led the attendants in prayer at the start of the event. Hemingway told the DI it was an honor to be asked to be part of the event, and that in her first months Miller-Meeks has done a phenomenal job.

Speakers at the tailgate criticized President Joe Biden’s handling of the Afghanistan withdrawal, the U.S. Mexico border, and vaccine mandate for millions of workers. They also blasted the $3.5 trillion spending bill Democrats are working on, which Sen. Bernie Sanders, I-Vermont, pitched to Iowan’s three weeks ago.

Miller-Meeks’ tailgate celebration, held before the Iowa-Kent State football game, was located at Streb Construction in Johnson County, a county Miller-Meeks currently represents, but would go to the 1st Congressional District if the Iowa Legislative Services Agency’s first proposal is approved.

RELATED: Christina Bohannan does not want to abolish law enforcement

In August State Rep. Christina Bohannan, D-Iowa City, announced she would challenge Miller-Meeks in 2022, but she would not be able to run in the 2nd district if the first map is approved.

Several speakers joked about gathering conservatives in Johnson County, which has 55,906 Democrats and 34,897 no party or other party voters registered, compared to 19,889 Republicans, according to September voter registration data.

Miller-Meeks told the DI the campaign had to plan around the football schedule, so they decided to incorporate the fall atmosphere into the event.

Fesler said Iowans will have to wait and see what happens with redistricting, but that the county was important to Miller-Meeks, despite the Democratic majority.

“She raises a lot of money. Democrats outnumber the Republicans two to one, but they’re still 18,000 Republican votes to have here, along with the no party voters who can be swung to that side,” she said. “So, I think it was a good thing, she had her event here today.”