The Hawkeye defense constantly got to Golden Flashes quarterback Dustin Crum, recording the team's most sacks since 2000. 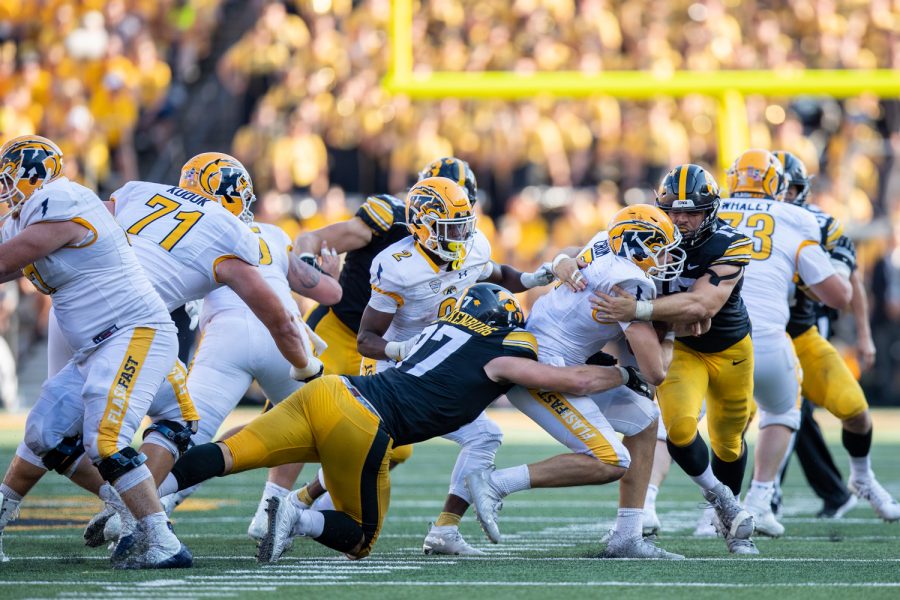 Iowa defensive linemen Joe Evans and Zach VanValkenburg combine for a sack during a football game between Iowa and Kent State at Kinnick Stadium on Saturday, Sept. 18, 2021. The Hawkeyes defeated the Golden Flashes 30-7. The Iowa defense forced seven sacks.

Kent State quarterback Dustin Crum’s back was against the Duke Slater Field turf in the fourth quarter of Saturday’s game when he glanced to his right and saw Iowa defensive linemen Joe Evans and Zach VanValkenburg headbutting each other after teaming up for a sack.

Crum then reached an arm out so his offensive linemen could assist in helping him off the ground. Unfortunately for Crum, this routine became all too familiar against Iowa.

No. 5 Iowa’s defense pummeled Crum all game, sacking him seven times in the team’s 30-7 victory over Kent State at Kinnick Stadium on Saturday.

“It starts with how they practice the whole week,” said Iowa linebacker Jack Campbell, who totaled 11 tackles and half a sack against the Golden Flashes. “I feel like as a defense we’re locked in. We knew Kent State was going to be a tough offense to play. But our defensive line, there’s no let-up with them. That makes me proud of them. Now we can just continue to keep improving. You only saw a little snippet of it tonight.”

VanValkenburg was good for 1.5, and defensive end John Waggoner got one for himself, too. Add in Campbell’s half sack, and that’s seven on the afternoon — the most the Hawkeyes have recorded in a single game since recording seven against Northwestern in 2000.

“We’ve really been focusing all week on improving our pass rush,” Van Ness said. “I really think this group of guys we have has a lot of trust in each other. A lot of communication today and everybody looking out for us … We always talk about getting as many hats to the ball as possible. That’s why we call it the swarm.”

“Every snap is important, especially for these younger guys,” Iowa coach Kirk Ferentz added. “That’s what I’ve been trying to say the last two weeks. We’ve got a lot of guys that haven’t played much, and Lukas is one of those guys. We’ve liked him. He works hard in practice, and you like what you see. There wasn’t room for him last year. We didn’t have openings for him to get involved. But all those guys, they’ve been doing a really good job.”

The 7⃣ @HawkeyeFootball sacks today were the most in a game since 2005.

Relive all of them ⤵️. pic.twitter.com/FaRKXNbEyt

Iowa’s first sack of the game was perhaps its most important.

On a third-down play at his own 15-yard line, Kent State’s center snapped the ball over Crum’s head and the ball rolled into the end zone. Crum recovered the ball and was immediately met by Van Ness and VanValkenburg for a safety.

The Hawkeyes went up 2-0, and running back Tyler Goodson quickly made it 9-0 with a 46-yard touchdown run on Iowa’s next offensive series after the Golden Flashes were forced to kick.

“That safety was a game-changing play,” Campbell said. “It took a little bit of air out of them, especially with it happening at the start of the game. It got Kinnick rockin’, and when that happens, good things happen.”

Iowa had to replace three starters from last year’s defensive line, including an All-American (Daviyon Nixon) and a first-team All-Big Ten player (Chauncey Golston), going into the 2021 campaign.

And it’s been a team effort in doing so. Defensively, 10 Hawkeyes have rotated in up front this season. And so far, that rotation has been a productive one.

Then on Saturday, Iowa’s front unit had its marquee performance of the year to this point.

“It starts out with [defensive line coach Kelvin Bell] and how he runs things,” Van Ness said. “He’s a great coach. He teaches us great fundamentals — how to have great pad level, get separation, all the things you need to be a great defensive lineman. I think we’ve all taken it in and I think it’s worked out for every guy in our room.”