The Hawkeyes used a 20-play scoring drive at the end of the first half to extend their lead over the Golden Flashes. 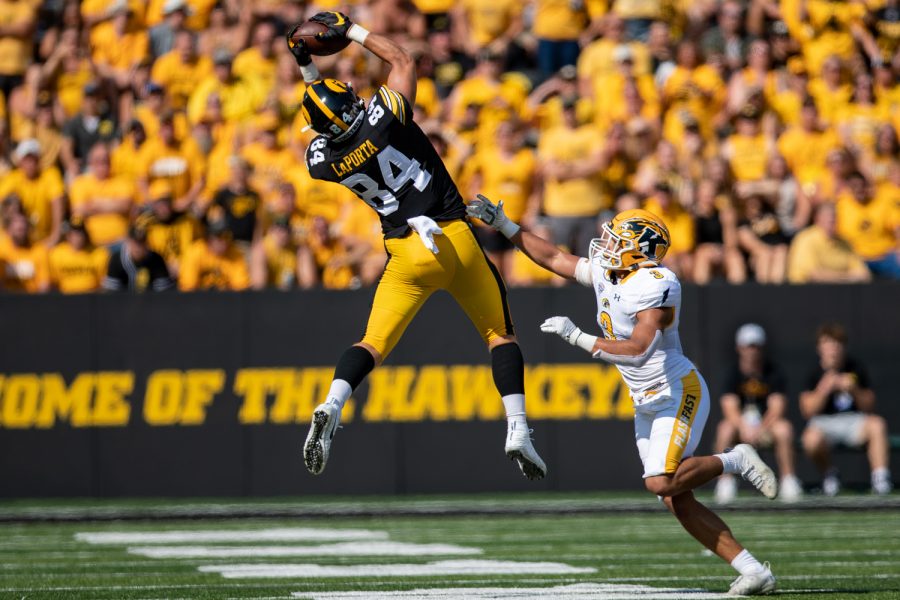 The No. 5 Iowa football team leads Kent State 16-7 at halftime of their matchup at Kinnick Stadium.

The Hawkeyes opened the scoring with a safety midway through the first quarter. Iowa running back Tyler Goodson followed that up with a 46-yard touchdown run. Kent State didn’t give in, though. After going down 9-0, Kent State quarterback Dustin Crum led his team down the field, eventually connecting with receiver Keshunn Abram for a 23-yard score. Iowa closed out the first half with a 20-play scoring drive that ended in a Sam LaPorta touchdown reception.

The Daily Iowan’s Pregame Editor Robert Read and Assistant Sports Editor Chloe Peterson are covering the game. Here are their takes from the first half.

Stop with the pass heavy offense and run the ball

Keep giving the ball to Goodson.

The junior All-Big Ten running back has 94 rushing yards (7.2 yards per carry) in the first half, and is responsible for Iowa’s best offensive play of the day. No. 2 running back Ivory Kelly-Martin is averaging 6.8 yards per carry on the ground too, though he may be stuck on the bench after two fumbles. The point being — keep the ball on the ground.

Quarterback Spencer Petras has already thrown 25 passes. He’s completed 17 of them, but Iowa’s only gained 125 yards from those passes. The Hawkeyes are getting basically whatever they want when they go to the ground. Offensive coordinator Brian Ferentz has wanted to go to the air at times on early downs, often putting Iowa in tough spots after incompletions or short passes.

A 20-play, 95-yard scoring drive that took up over eight minutes of game clock was a nice end to the half for Iowa. But if head coach Kirk Ferentz and company want to really put things away against a heavy underdog, feed Goodson and let him run all over Kent State’s inadequate rush defense.

The Iowa secondary was the focal point for the first two games of the season, as the Hawkeyes recorded six interceptions

Now, Iowa is struggling against a dynamic Kent State offense — one that runs a play every 10-15 seconds.

And one receiver in specific is plaguing the Hawkeye secondary this week: Kent State fifth-year senior wide receiver Kashunn Abram.

The first was a 48-yard pass, along with a 8-yard rush, in the first quarter to bring the Golden Flashes deep into Hawkeye territory. Moss also allowed a 45-yard pass to Abram and 9-yard rush in the second quarter.

But the Hawkeye defense had a bright spot in the first quarter. Redshirt freshman left tackle Lukas Van Ness and senior defensive  Zach VanValkenburg sacked Kent State quarterback Dustin Crum in the Golden Flashes’ endzone for a safety — the first score of the game.

Getting some fair replies relative to Petras play. He has not been horrible today. There have been some bad throws, but some good ones. I think we are experiencing a cumulative effect, and also some urgency bcz we can see this D is B1G title good. Offense has to come along