After struggling on offense for the first two weeks, Iowa brought in 418 offensive yards against the Golden Flashes Saturday afternoon. 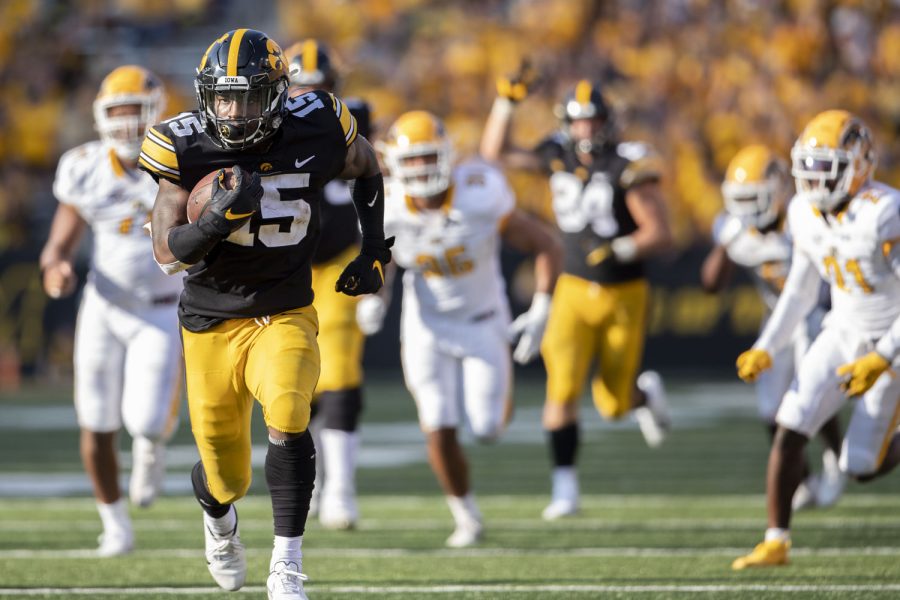 Iowa running back Tyler Goodson runs the ball toward the end zone for a touchdown during a football game between Iowa and Kent State at Kinnick Stadium on Saturday, Sept. 18, 2021. The Hawkeyes defeated the Golden Flashes with a score of 30-7.

It was Hawkeye junior running back Tyler Goodson’s game at Kinnick Stadium on Saturday.

The preseason first-team All-Big Ten selection rushed for 153 yards — a career high — and three touchdowns in the No. 5 Hawkeyes’ 30-7 rout of Kent State.

“I know all the work I put in the offseason,” Goodson said postgame. “And it’s just a blessing, and I’m thrilled to see that it comes into play for me on Saturdays. It means a lot to me.”

Goodson averaged 7.8 yards on 22 attempts, highlighted by a 46-yard touchdown with six minutes left in the first quarter.

On a third-and-one attempt, Hawkeye quarterback Spencer Petras led a misdirection play, flipping the ball to the left to Goodson, who evaded Golden Flashes defenders to easily make the run into the end zone.

“Yeah, the one we hit on around the left end, with all due respect to Tyler [laughter], but that is a play that we want him in the backfield for that play because it kind of plays to his deal,” head coach Kirk Ferentz said postgame. “… To Tyler’s credit, he did a good job running, good to get him on track, and hopefully we can keep building off that.”

Goodson’s career game comes on the heels of a struggling Hawkeye offense, as Iowa only netted 173 total offensive yards in its Week 2 victory over Iowa State.

Goodson came 20 yards short of matching Iowa’s offensive total from Week 2 on Saturday, and the Hawkeyes notched 418 total yards on offense against the Golden Flashes

Senior running back Ivory Kelly-Martin also contributed to the Hawkeye total with 11 receiving yards and 41 rushing yards. But Kelly-Martin was pulled from the game in the second half after fumbling twice, with redshirt freshman Gavin Williams taking over as the No. 2 running back.

But against Kent State’s stout, run-preventing defense, Goodson credits the Hawkeye offensive line for creating gaps in the field.

“They’re always going to be strong throughout the game and get stronger,” Goodson said. “And that’s what I see in this whole line, and it all starts with the guy in the middle, Lindy. He does a great job in being a great leader for those guys.”

Those starters don’t stay for long, as true freshman Connor Colby, redshirt freshman Tyler Elsbury, and junior Jack Plumb sub in and out at will.

But the seemingly endless rotation of fresh faces doesn’t affect Linderbaum’s focus. He doesn’t even notice.

“Sometimes I might not even know who’s next to me,” Linderbaum said. “And they do a great job either way. You know if we have a true freshman like Colby, who’s done a great job, especially as a freshman,or Justin [Britt].”

The Hawkeye offensive line also received some veteran leadership Saturday with the return of senior right guard Kyler Schott in the two-deeps.

Schott missed the first two games of the year because of a preseason injury baling hay on his family’s farm. Although Schott lined up behind Britt, and saw limited snaps in Saturday’s game, Linderbaum felt the increased sense of cohesion on the field.

“It was nice to have Shooter [Schott] back, he got a few snaps in, so just building that depth on the O-line is important.” Linderbaum said. “Just the good thing is, you know, we’re gonna keep growing, we’re gonna keep growing as a unit as the time goes on.. I’m glad that he’s able to get back and play, get some snaps under him and now he’s the guy that’s gonna help our offensive line.”