One year from now, on Sept. 2, 2022, the new Stanley Museum of Art will open its doors to the public after not having a location for 14 years. The reopening will feature work from many different artists. 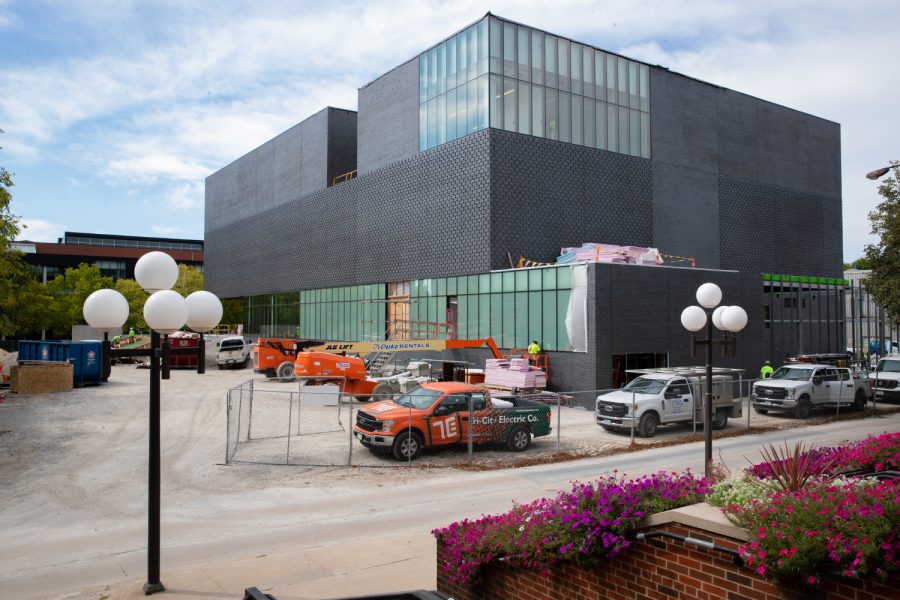 The construction of the Stanley Museum is shown on Tuesday, Sept. 14, 2021.

The floods of 2008 ravaged the former home of the University of Iowa Stanley Museum of Art. Now, the new museum will be flooded with art, old and new, by notable UI alumni and teachers.

With the opening of the new Stanley Museum of Art approaching in fall 2022, Director Lauren Lessing is tasked with choosing pieces to belong in its inaugural collection. The UI has around 17,000 objects in its collection, but only about 1 percent are on display.

Katherine Wilson, manager of collections and exhibitions at Stanley said in some capacity, the museum has been moving the collection since 2012. She is hoping to have the full collection moved into the new building by this time next year.

Lessing said that the team’s goal with the new collection was to focus on pieces that people have missed and want to see again. During the museum’s time without a building, after the flood of 2008, new pieces entered that collection as well and have yet to be seen by the public.

The new museum is located next door to the Main Library, on the corner of Madison and Burlington Streets.

Outside the museum, there will be outdoor sculptures from Beverly Pepper, Lila Katzen, and George Rickey that the Stanley has been conserving since its closure in 2008.

The museum has also commissioned artist Odili Odita to paint a mural for the lobby. Odita’s parents were graduate students in the UI’s School of Art and Art History in the 1960s.

Most of the art will be housed in the second floor’s 16 gallery spaces.

“Right when you come up off the elevator or off the stairs, you’ll see these wonderful visible storage spaces that will house our really amazing collection of ceramics,” Lessing said.

Of those 16 galleries, four will be devoted to their African art collection. Others will house both Asian and Native American art. Stanley has received a grant from the Terra Foundation of American Art to hold an exhibition on Native American ledger drawings curated by Jacki Rand in the fall of 2023.

Another portion of the museum will be centered around their collections of American and European modernist art from the late 19th century up to present day. Those collections will include pieces from Jackson Pollock, Sam Gilliam, Alma Thomas, Grant Wood, Elizabeth Catlett, Philip Guston, Miriam Schapiro, Isamu Noguchi, Marsden Hartley, Stuart Davis, and Lorraine O’Grady.

Many of those artists are either UI alumni or have spent time teaching at the university.

The Pollock painting, “Mural,” will be placed in the DeWolf family gallery, where it will permanently be on view.

“The mural is so important to us and it’s just amazing that we have one of the most important works of art created in the 20th century here at the University of Iowa,” Lessing said.

Not only will the Stanley Museum display art from their collection, but they will welcome exhibitions from outside artists in the American and European portion of the museum.

“We’ll probably be able to bring in some guest curator voices to finish the details of that installation,” said Lessing. “Which is pretty nice, because I think it gives people a chance in the broader community to work with this art collection that has been so missed. Not just here in Iowa City, but in the art world generally.”

The inaugural installation will be a three-year installation, but Lessing said that doesn’t mean there won’t be changes.

For example, one of the smaller gallery spaces, the new media gallery, will circulate video installations regularly. The first artist being commissioned for this space is Heidi Wiren Bartlett, who has created a video called Down River which commemorates the flood damage of the previous museum and the legacy of that building.

“It’s a beautiful video piece, and so appropriate to open with, but that will only be on view for a semester,” Lessing said.

Stanley’s manager of communications and marketing Elizabeth Wallace described a new educational opportunity that will be available to everyone at the museum next fall.

“You can request to see a particular piece of art, even if it’s not on view,” Wallace said. “You can make an appointment and you can have a date with a piece of art for free.”