A student organization, U for Us, has rebooted after Phi Gamma Delta fraternity protests regarding sexual assault survivors at the beginning of the semester. 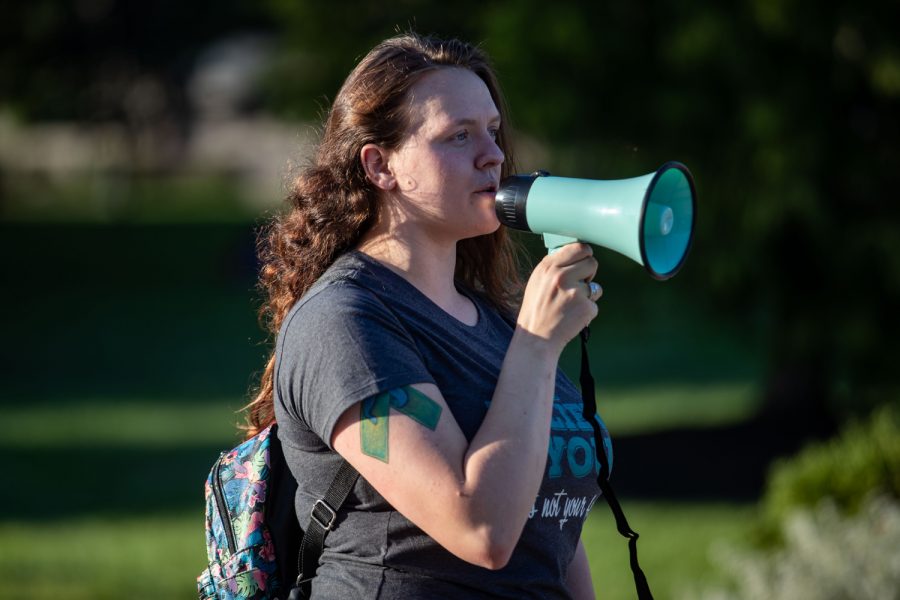 U for Us member Rebecca Evans speaks during the March for Survivors demonstration on the Pentacrest on Thursday, Sept. 16, 2021. Their goal is to support survivors of sexual assault, and they plan to meet every Thursday at 5 p.m on the Pentacrest.

The protests against the Phi Gamma Delta fraternity, known as FIJI, has inspired a new organization to take root on campus.

U for Us is a group that advocates for survivors of sexual assault.

“What we saw in that moment, is that a lot of people really cared about this issue, and that’s why so many people showed up because that story really resonated with them,” Aline Sandouk, a co-organizer from U for Us said. “We could relate to the issue, and we wanted to keep the momentum going because there was so much energy, and we didn’t want to lose that.”

U for Us was originally started in 2018 by Sriven Kadiyala, but it paused for three years before getting rebooted by Kadiyala with the help of Sandouk and Rebecca Evans.

“We kind of found each other through the protest that happened a few weeks ago, mainly on the [Abolish FIJI] Facebook group there were a lot of really good conversations happening,” Sandouk said.

The Abolish FIJI Facebook page has since been shut down. Evans said that a gripe she had with the people in charge of the FIJI protests was the lack of leadership.

“There wasn’t really anybody in charge of what was happening, there wasn’t a plan,” Evans said. “Eventually it dwindled down to two freshmen who were doing an amazing job. I’m so happy they took this up, but it was two freshmen who said, ‘We don’t really have a plan, and we just kind of walk and we start chanting and let the people follow.’”

U for Us is not officially affiliated with any organization but has been “working closely” with the Rape Victim Advocacy Program, Evans said.

Sandouk said at this time the group is primarily gathering information from survivors and their stories through a “tip line” in order to better help those they are advocating for.

U for Us is planning on a screening at the Iowa Memorial Union of It Happened Here, a documentary about sexual assault on college campuses.

“Someone really close to me was assaulted a few years ago and they didn’t get the justice they needed and that’s what started me down this path,” Kadiyala said.

Kadiyala said the UI is not doing enough for survivors.

U for Us hosted its first rally on Thursday afternoon at the Pentacrest with four demonstrators attending. It has plans to keep rallying every Thursday for the foreseeable future, Sandouk said.

“One goal is to raise awareness of the work that we’re doing and give people the opportunity to approach us and kind of talk to us about what we’re doing,” Sandouk said. “But a big one is to keep sending the message to victims and survivors in the community that we care about them.”