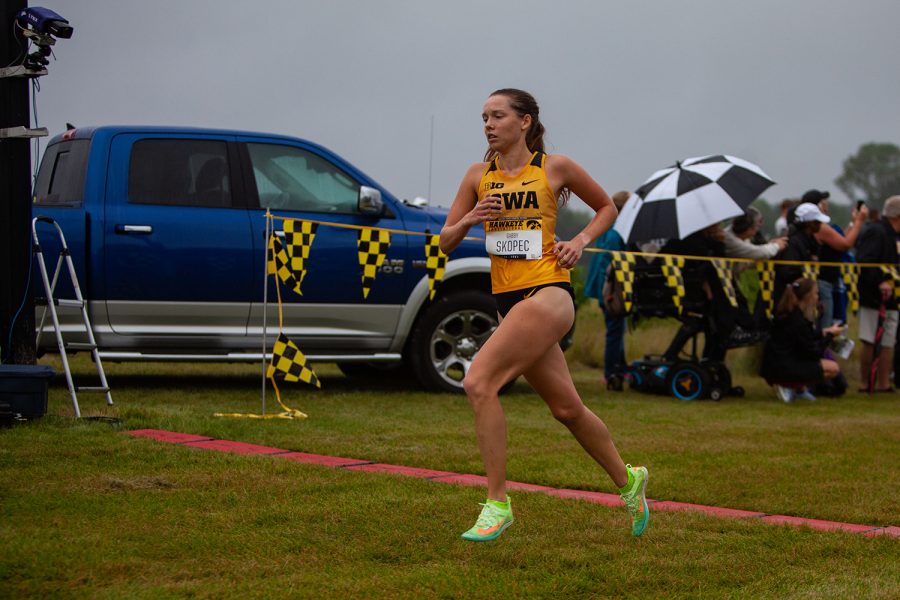 For the last four years, Emma Gordon and Gabby Skopec have participated in one common activity: Running. Gordon has raced for Iowa’s cross country and track teams since 2018. Skopec started running with the Hawkeyes in 2020.

With over eight years of collegiate running experience combined, Skopec and Gordon have become proven leaders on the Hawkeye cross country team.

“[Emma and Gabby] are experts at it because they have been doing it for three and four years, so they understand the process and the routine,” Hawkeye head coach Randy Hasenbank said.

The wisdom the pair has shared with their teammates has been invaluable, as Iowa’s 2021 roster features 21 underclassmen.

“I think, especially being a freshman, just like kinda following them and letting them lead the way, it gives me a good opportunity to see what it will be like when I’m older,” distance runner Lauren McMahon said. “They are really good examples and have great leadership.”

Skopec and Gordon aren’t the Hawkeyes’ only leaders. Iowa has relied on all its upperclassmen for guidance this season.

Not all of Iowa’s upperclassmen lead vocally, however. Some just set an example for the Hawkeyes’ younger runners to follow.

“They lead and set the example, and their team follows,” Hasenbank said. “The longer you are around a coach, they become an extension of you. So, it’s like a lot of coaches versus one coach.”

In their years with the program, Skopec and Gordon have become extensions of Hasenbank both at practice and on race days.

“I think of preaching consistency because that’s how we got to where we are today,” Gordon said. “We have to trust the coach because he knows what he’s doing with his training. He often knows what’s best for us.”

Gabby Skopec said being an extension of Hasenbank on the course isn’t too much pressure for her to handle. Skopec enjoys supporting younger athletes and answering any questions they might have. Though, she does prefer to lead by example rather than by giving orders.

The Hawkeye women’s cross country team kicked the 2021 season off with a bang Sept. 3 at the Hawkeye Invitational in Iowa City. Iowa placed third in the 11-team field at the Ashton Cross Country Course. The Hawkeyes’ highest finisher at the event was sophomore Kelli Tosic, who placed 11h.

“We have a really solid group of five and even down to seven which is a depth we have never really had before,” Gordon said.

The Hawkeyes’ next race will come Sept. 18 at the University of Nebraska-hosted Dirksen-Greeno Invitational in Lincoln.

Iowa has four regular season meets left this season. The 2021 Big Ten Championships will be held in University Park, Pennsylvania, with NCAA Midwest Regional and NCAA Championships to follow Nov. 12 and 20, respectively.