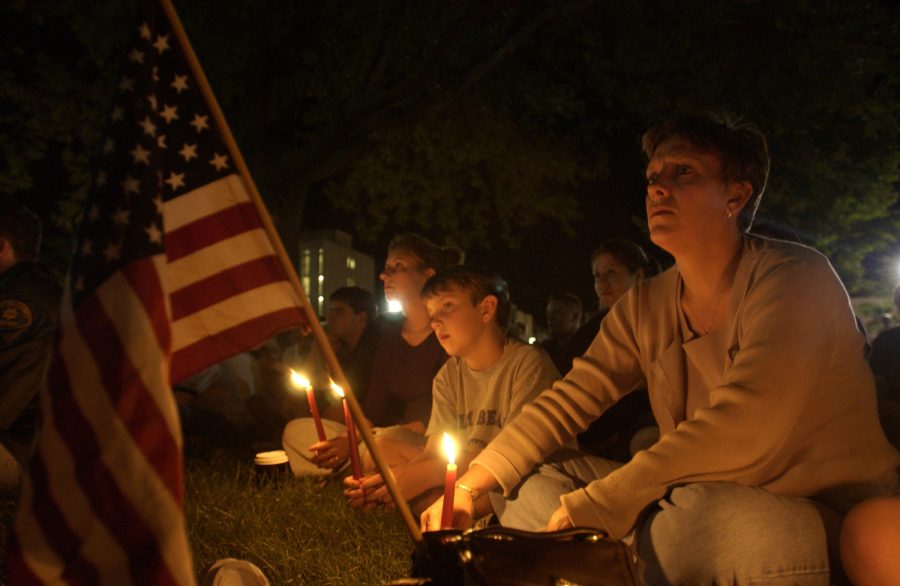 Iowa City resident Kitty Lake and her children listen at the candle light vigil on Sept. 11, 2001 on the Pentacrest.

A campus in mourning, but not at standstill

The sky was clear in New York City on Sept. 11, 2001. At 8:46 a.m. Eastern time, the World Trade Center Towers, commonly known as the twin towers, collapsed.

In Iowa City, the air was cool and the sky was clear — and the gravity of the event was certainly felt.

UI Professor of Religious Studies Raymond Mentzer — then brand new to the role — was at home, preparing for his class and listening to Iowa Public Radio when the announcer said, “There’s a report of an airplane crashing into the World Trade Center.”

“Now, I imagined a little private plane. I mean, who would have thought [it was] a large passenger plane?” Mentzer said. “Then a little bit later, she said, ‘Well no, this is really serious.’”

He said both he and his wife had lived through President John F. Kennedy’s assassination, and that most Americans who were alive that day remember where they were at that exact moment.

“This is very much the same,” he said.

Mentzer said the reaction to news of the attack in his class was delayed, partly because of the lack of social media. In his Medieval and Religious Culture class, he recalled that the majority of the students were Christian and a few were Jewish. Two were Muslim.

He said a student of his made an “uncharitable remark” about the attack, which prompted Mentzer to ask his students to reserve judgement.

“We didn’t know what happened exactly. There was this sense that somehow these were Islamic terrorists, but no one knew for sure,” he said. “At one point I felt I needed to say, ‘Look, no matter who did this, keep in mind that we’ve had homegrown terrorists.’”

But on that day, even as students stood shocked in front of screens, the UI did not cancel any classes or events, although university officials considered it. According to the Sept. 12 edition of the DI, some classes still reflected on and discussed the 9/11 attacks, and some were released early.

Then-UI President Mary Sue Coleman said the best way to respond was to “continue our work and studies…and not be paralyzed by the horrific events that have occurred.”

Coleman held a two-hour fireside chat, where tears ran down the faces of attendants. She had told students it was imperative to continue moving forward while also discussing the tragedy.

“It is very important for us to carry on,” Coleman had said. “I think terrorists win if we just stop. We shouldn’t be paralyzed.”

Plambeck remembered that, when Coleman made these statements, most of the campus agreed with her.

“It was something that happened to the United States, but it was also something that didn’t happen next door, in a way that, you know, talk to people in New York about today, and it really changed their life,” Plambeck said. “It didn’t have that sort of impact in Iowa City. It was a little more abstract.”

At the end of the semester, Mentzer said a student of his responded in an evaluation that he was the only professor she had who had mentioned the attack on the twin towers on Sept. 11.

“People, both faculty and students, were sort of feeling their way through this, trying to make sense of it before discussing it,” he said.

One student during the fireside chat had suggested the U.S. bomb Middle Eastern countries immediately, while another said the country shouldn’t.

He added that he refrained from bringing the incident up during his classes because of its sensitive nature. He didn’t want to create a situation that could potentially make the Muslim students feel ill at ease.

Muslim students in 2001 were fearful of prejudice, according to an article from the DI. One student, then-UI sophomore Abe Assad, said it was “typical” to blame a Middle Eastern country because of its prior history of terrorism.

Assad, who is half-Palestinian, said at the time that he was not fearful for himself, but he could foresee prejudice against others.

Some students at the UI said they were saddened that ethnicity and religion became focal points of the U.S.’s investigation into the attack.

With his background in religious studies, Mentzer understood how to “walk on eggshells,” so he said he deferred to his colleagues who specialized in Islamic studies at the UI to field questions during a department panel held on the attack.

Mentzer said the 20th anniversary of the attacks caught him by surprise, and that the events taught Americans to be more inclusive, from his perspective as a religion instructor.

“I think we have made an effort… to see the broader brushstrokes here, to be a little more inclusive, to be a little more tolerant,” Mentzer said. “Intolerance, whoever is displaying it — it doesn’t matter who is displaying it or what your faith might be, or no faith whatsoever — it doesn’t really help… It’s probably a cliche to say it’s become a smaller word, but certainly we have more interactions than might have otherwise been the case.”

With the U.S. recently withdrawing all troops from Afghanistan, Plambeck remembers that 20 years ago, everyone was in a state of shock as the U.S. was not involved in any wars at the time.

“We didn’t realize how some people around the world were angry at the U.S., and so there was an innocence, truly, that was lost in that moment,” he said. “…We all had to rethink what was happening in the world, and sort of what we thought about that, and all of those things in a way we hadn’t before.”

Looking back, Plambeck said the reporting done by journalists in New York and on the UI campus was remarkable.

“The amount of stories that were done, the amount of copy that came in, the number of good stuff people collected,” he said. “I mean, it was one of the most amazing things I’ve seen in journalism.” 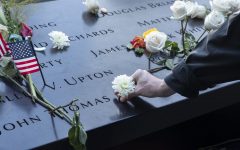 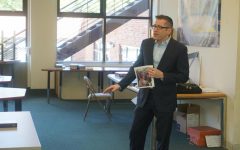 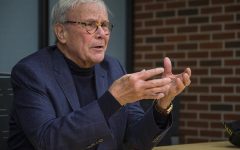