In a protest on the Pentacrest Friday night, members of the group Cops Off Campus made demands about campus policing and investigative transparency. 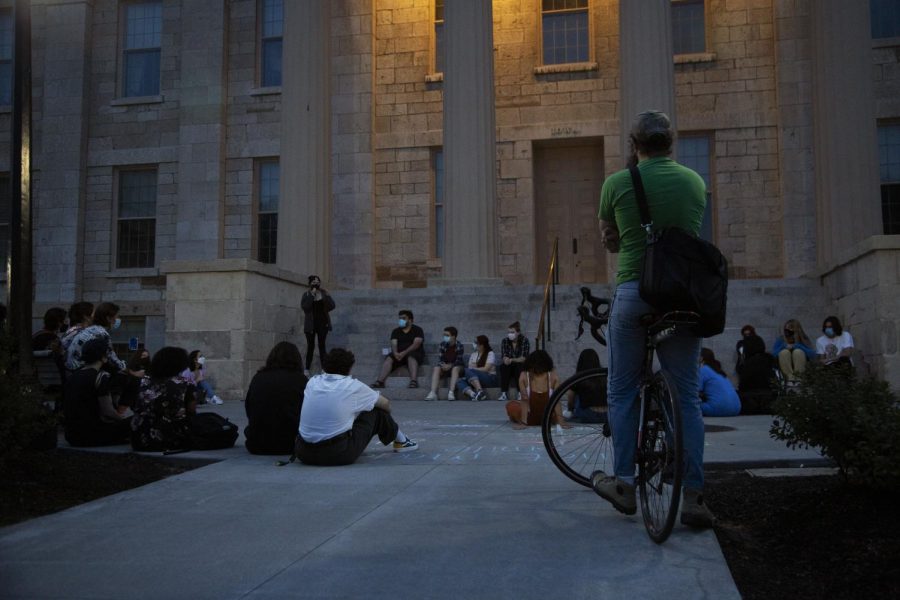 Members of the group Cops Off Campus gather at the Pentacrest Sept. 10.

Around 30 people gathered on the Pentacrest Friday night to protest sexual assault on campus and policies, such as the involvement of the University of Iowa Police Department in sexual assault cases.

Cops Off Campus, a local chapter of the larger Cops Off Campus Coalition voiced its demands for the UI in a protest, calling for widespread changes to the university’s sexual assault policies in what they called a community demand-building session.

The protest lasted until 8 p.m. and the group was going to march after survivors shared their experiences, but citing low turnout, organizers decided against it.

Some of the group’s demands, directed at the university, included:

Organizers also called for alleged aggressors to be removed from the residence halls and classes of survivors of sexual assault.

The group also heard from an unidentified speaker who addressed ideas about sexual assault reform for perpetrators.

Mia Randazzo, a UI freshman, spoke about their experience with intimate partner violence and trauma bonding, which they said is a different kind of sexual misconduct that is not often considered.

They said although a lot of people perceive rape as something that is happening all around them, it in fact could be happening to them.

Randazzo defined trauma bonding as a recurring reinforcement of good and bad feelings which “causes the victim to feel numb.”

“Rape can still happen when you’re in a relationship with someone you love,” Randazzo said in an interview with The Daily Iowan. “Consent is when both people want it.”

Mandi Nichols said she attended the protest to support survivors and the action of the Cops Off Campus protest. She said the allegations against members of the UI Phi Gamma Delta fraternity could be one of many cases at the UI.

“It brought attention to a serious cultural situation which we’ve been dealing with for a long time,” Nichols said.

Danielle Huante, a volunteer from UI Rape Victim Advocacy Program, said she was there to provide emotional support to anyone in need. She said that the protests are an attempt “to make campus a safer, less volatile place.”

She also echoed the thoughts of Thomas, saying that “sexual violence has persisted for a long time.”

The voices of those who volunteered to share their thoughts and experiences were amplified by a megaphone, which projected their voices across the Pentacrest. A few people stopped to listen to the group as they walked by.

Randazzo said they plan to be at every protest going forward. As they closed their address to the crowd, they provided words of advice.

“Be safe, always protect yourself and others,” Randazzo said.