University of Iowa students and Greek organizations are taking the right steps toward eradicating sexual violence on campus. 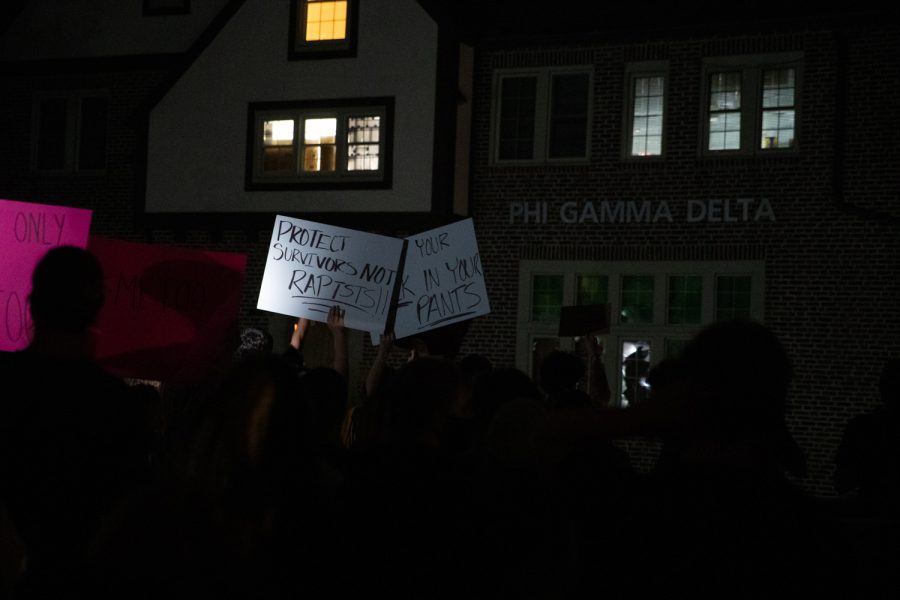 People protest during the third night of protests following sexual assault allegations against the University of Iowa’s chapter of Phi Gamma Delta at the chapter structure on Thursday, Sept. 2, 2021. (Grace Smith/The Daily Iowan)

When fraternity members of Phi Delta Gamma, known as FIJI, were accused of sexual assault, University of Iowa students and organizations took matters into their own hands in an attempt to induce immediate change while awaiting university action.

It has been over one year since a University of Iowa student was allegedly sexually assaulted by two members of the fraternity Phi Delta Gamma. Following the absence of immediate punishment from the justice system, students and community members are now rallying together to update policies, advocate for victims, and call for university-based administrative retributions.

Last week, four protests took place off-campus at the FIJI fraternity house, a FIJI-affiliated house, and on-campus in front of the Old Capitol and the President’s Residence.

With over 2,000 protesters on the first night and over 142,600 signatures petitioning for the removal of FIJI, conversations about sexual violence erupted throughout campus, as well as disapproval toward the actions of the fraternity and the university.

After receiving mass emails with a tone-deaf apology from Angie Reams, associate vice president and dean of students, and Liz Tovar, executive officer and associate vice president division of diversity, equity, and inclusion stating a simple, “we hear you,” and links to resources, students feel the university is just trying to sweep this matter under the rug.

Without justice from the university, many student-run organizations have reevaluated what it means to be proactive against sexual violence.

Undergraduate Student Government passed the “Standing With Survivors Resolution” on Sept. 8. This legislation aims to address and resolve issues of sexual violence as well as provide resources for survivors.

This resolution requires those with involvement in Greek Life at the UI to “release a statement dedicated to supporting survivors of sexual misconduct or share this resolution in support of survivors.”

Fraternities and sororities across campus have also taken initiative to show support and advocate for victims of sexual violence.

In an email to The Daily Iowan, Will Hochman, president of the Interfraternity Council, condemned sexual assault on campus.

“Sexual assault or harassment is not something that the University nor the Interfraternity Council takes lightly, as it is unacceptable and must be eradicated from our campus. On September 13th, 2020, Phi Gamma Delta removed two members from their chapter related to the incident,” Hochman wrote.

Hochman also wrote that the council plans to innovate and implement proactive initiatives to further combat sexual violence within the Greek community.

Much like the Interfraternity Council, the Panhellenic Council as well as many other fraternities and sororities have spoken out against the alleged actions of the removed FIJI members and in support of the victims of sexual violence.

President of Phi Kappa Psi, Austin Quinn, is implementing a violence prevention education workshop through the Fraternities and Sorority Life council on campus.

“We plan to continue to have one each semester to analyze our practices and culture while also implementing new practices,” Quinn said.

“We believe it is important to advocate for and protect the victims of all identities when it comes to these violent acts,” Coyle said.

As university organizations coming together to establish new, preemptive policies, we must remember the tragedy that caused such a ripple effect of change within university students and organizations. The new policies are simply a silver lining within the major issue that is sexual violence on campus.

While we can acknowledge the positive changes being made regarding stricter sexual violence policies, these actions are always inexcusable. Vast change must be made to shift away from the toxic culture surrounding sexual violence and Greek life.