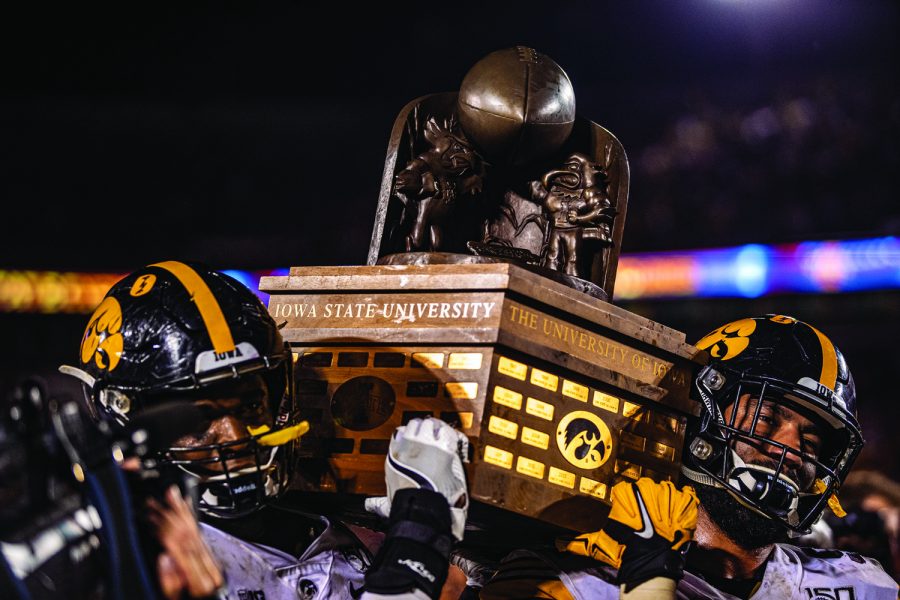 Iowa players hoist the Cy-Hawk trophy during a football game between Iowa and Iowa State at Jack Trice Stadium in Ames on Saturday, September 14, 2019. The Hawkeyes retained the Cy-Hawk Trophy for the fifth consecutive year, downing the Cyclones, 18-17.

Saturday’s meeting between the in-state rivals is the 68th in series history, but the first with both teams ranked in the AP poll.

Four trophy cases are positioned near the entryway to the Iowa football team’s performance center, a building adjacent to Kinnick Stadium. Each of them is meant to hold one of the team’s rivalry trophies but, as of earlier this week, only three of those­ trophies are being displayed.

The Floyd of Rosedale, Heroes, and Heartland Trophies are proudly presented along the staircase to the second floor of the building, celebrating Iowa’s 2020 victories over Minnesota, Nebraska, and Wisconsin. The Cy-Hawk Trophy, which goes to the winner of the (typically) annual Iowa-Iowa State football game, is noticeably missing.

Instead of resting on the platform it has been placed on for the better part of the last six years, the trophy can be found in Iowa’s weight room — a trophy week tradition.

The trophy’s presence in front of the team as players work out is meant to serve as a reminder that, on Saturday, the Hawkeyes are playing for the right to bring that trophy back to its home in the Hansen Football Performance Center. Or, as Iowa center Tyler Linderbaum put it, to extend its lease in Iowa City.

“A trophy game has a little bit more meaning as a player,” Linderbuam said. “Anytime we get a chance to keep the Cy-Hawk Trophy here, we’re going to be trying our best.

“Rent is due on Saturday if we want to keep that trophy this year.”

In this case for Iowa, paying rent, as Linderbaum put it, would be defeating Iowa State for the sixth consecutive meeting between the two teams. And this meeting may be the most anticipated in series history.

The Iowa and Iowa State football teams have never played each other with both programs ranked in the Associated Press’ top-25 poll. That will change in Ames on Saturday.

The 68th meeting between the in-state rivals isn’t only the first Cy-Hawk game between two ranked opponents — it’s a top-10 showdown that will hold the nation’s interest, not just the state’s. The Cyclones are No. 9 in the Week 2 poll, directly ahead of the No. 10 Hawkeyes.

“I didn’t know we were [top 10], first of all. Swear to God,” Iowa coach Kirk Ferentz said on Tuesday, about an hour after the latest AP poll was released. “Right now, it doesn’t matter. We won’t be if we go out and lose Saturday.”

The Hawkeyes climbed eight spots in the poll after rolling over Indiana, 34-6, in Week 1. The Cyclones fell two spots as a result of a narrow 16-10 victory over UNI. Iowa State is in the top 10 for the fifth week ever. Iowa is there for the 30th week under Ferentz and for the first time since the end of the 2015 season. Both teams’ victories on Sept. 4 set up this weekend’s milestone matchup.

Not that this year’s edition of the Cy-Hawk game needed any other factors to get excited about.

Both teams have been waiting close to two years to play each other. The last time Iowa and Iowa State played was in 2019 — an 18-17 Hawkeye victory in Ames after the Cyclones muffed a punt in the game’s final minutes to secure an Iowa victory. The win was Iowa’s fifth in a row against Iowa State.

The two teams didn’t play last year as a result of the Big Ten’s conference-only schedule, which was put into place because of COVID-19 precautions. The teams had played each other every year since 1977 prior to 2020.

Off the field, the day after the 2019 game, Hawkeye Marching Band members went public with allegations of physical harassment they claimed to have faced at Jack Trice Stadium. Then-University of Iowa President Bruce Harreld told The Daily Iowan after the allegations surfaced that he wasn’t convinced the series should continue unless he felt Iowa’s fans, band members, and athletes could be protected.

Even after that scandal, the rivalry continued. At least it has for the time being.

With the Big Ten aligning with the Pac-12 and ACC for nonconference scheduling, plus the Big 12 looking at expansion, the future of the Cy-Hawk series beyond 2025 — when the contract between the two programs expires — is uncertain.

“The Iowa-Iowa State Cy-Hawk matchup is good for our state, good for college football, and college athletics,” Iowa athletic director Gary Barta said in August. “That being said, I can’t predict the future.”

Just in case the game needed another hype factor, ESPN’s pregame show, College GameDay, will be in Ames this weekend covering the Cy-Hawk game for the second meeting in a row. And ABC’s top broadcasting crew — consisting of Rece Davis, Kirk Herbstreit, and Holly Rowe — will be on the call for the game. The state of Iowa will be front and center for the rest of college football to see.

Which, Ferentz said, shouldn’t impact his team much.

“That’s great for the state of Iowa, visibility, so that’s a good thing,” Ferentz said of the Cy-Hawk game being on GameDay for the second consecutive meeting. “But all that being said, I never knew they were there [in 2019]. We got off a bus, we walk in. We’re totally disconnected from that.

“All I know, and hopefully our players understand, we’re going into a really tough environment against a really good football team with a lot of good players at all positions. That’s the reality of it all, and that’s what we’ve got to focus on. You can’t worry about all the circumstances outside, you really can’t. If you do, you’re wasting energy and time. Hopefully everybody will understand that.”

The factors contributing to why this may be the biggest Cy-Hawk game ever may not mean much after the teams kick off at 3:36 p.m. on Saturday.

But that doesn’t mean the circumstances surrounding the game are going unnoticed by those involved.

“So, I think them being at their home place knowing that College GameDay will be there is a good distraction for them and allows us to focus on us.”

Iowa doesn’t have to worry about hosting GameDay but is still hoping to block out the noise this week — literally and figuratively.

Quarterback Spencer Petras said the team is trying to ignore the outside diversions leading up to this game. Because Iowa played in fanless stadiums last year, ignoring the noise inside Jack Trice Stadium will take some getting used to. Iowa is going into Ames this weekend for its first game in a hostile environment since beating Nebraska in Lincoln in 2019.

Speakers pumping out music or fake crowd noise were positioned behind Iowa’s offense in practice this week to simulate 61,500 fans at Jack Trice Stadium.

Even with the magnitude of this week’s game, Ferentz and Iowa’s players mostly stressed that they are approaching Saturday like any other contest. Some Hawkeyes, though, admitted this may be the most hyped-up game they’ve ever been a part of.

Iowa finished last season 6-2 and is on a seven-game winning streak overall. Iowa State is coming off a nine-win season and a Fiesta Bowl victory.

The Hawkeyes boast Linderbaum, a preseason All-American, and an All-Big Ten running back in Goodson. Plus, Iowa has one of the premier defenses in the country by most metrics. The Cyclones returned seven first-team All-Big 12 players from a year ago back to their 2021 team — including the conference’s offensive (running back Breece Hall) and defensive (Mike Rose) players of the year, as well as the coach of the year in Matt Campbell.

Ferentz said both teams are deserving of their top 10 rankings. Which team stay in the top 10 will be determined Saturday night. That’s when “Hate Week,” as it’s referred to on both campuses, will be over and a winner will have been crowned.

It might be called “Hate Week,” but Iowa wide receiver Nico Ragaini said he doesn’t hate Iowa State, he appreciates the rivalry. Every Hawkeye seems to have connected with the series, whether they’re Iowans or not.

Goodson, coming from Suwanee, Georgia, wasn’t familiar with the Cy-Hawk rivalry when he arrived in Iowa City in 2019. It took some children flipping him off once he got off the bus in Ames his freshman year to fully grasp the rivalry.

Petras, who resides in California, said the never-ending I-O-W-A chant inside Kinnick Stadium during Iowa’s 13-3 win over Iowa State in 2018 was his “welcome to the rivalry” moment.

Defensive end Joe Evans grew up in Ames and loved playing high school football for the Little Cyclones, but wanted to play for the Hawkeyes ever since receiving a No. 88 Iowa jersey when he was five years old.

Linderbaum remembers watching the Cy-Hawk game while growing up in Solon. He always knew he wanted to go to college and play football 15 minutes down the road at the UI.

These players and more will be back in a Cy-Hawk atmosphere on Saturday for what could be the premier game in the series’ history. And, with the game in the national spotlight, they get to share the rivalry with the rest of college football, too.

After two years, plenty of bad blood, and an uncertain future attached to the game, Cy-Hawk week has returned. If things go Iowa’s way, the Cy-Hawk Trophy will make a return trip to Iowa City and be back in its display soon enough.

“I’ve been looking forward to it ever since last season ended,” Goodson said. “… [Ames] is very lovely, the town is very lovely. Just going around campus and seeing the disrespectful signs and gestures just grows your love for the game and the love for the rivalry … It’ll be exciting going over there and taking the hostility out of the crowd and just going over there and getting a win.” 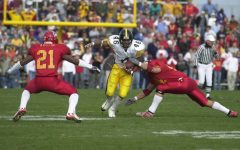 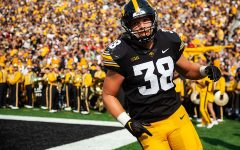 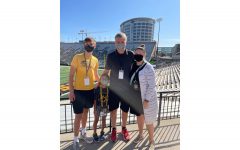