Ebenezer Adeyemi, a graduate student majoring in anthropology at the University of Iowa, is currently researching the practice of post-colonial governments in his home community of Makoko in Lagos, Nigeria. 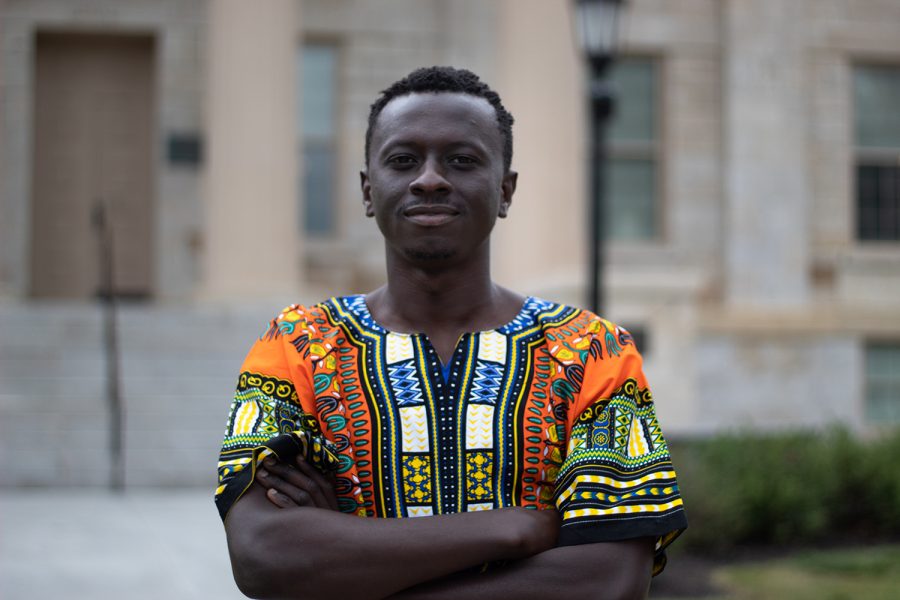 Ebenezer Adeyemi poses for a portrait at the University of Iowa on Saturday, Sept. 4, 2021.

Ebenezer Adeyemi, a University of Iowa anthropology student, is researching the practice of post-colonial government in his home community of Makoko in Lagos, Nigeria as it impacts the residents who live in poor conditions.

When Adeyemi grew up in Nigeria, he said he noticed the scarcity of resources. Adeyemi said he is also aware of the inadequate measure of resources given to the residents of Makoko.

Adeyemi says the lack of basic amenities, such as water and clean bathrooms, raises health concerns.

“People are susceptible to infectious diseases such as Malaria or Cholera,” he said.

Adeyemi said the daily life of an average person in Makoko is characterized by informal work because of the lack of access to employment, government work, and private industries.

“They may work for a construction company,” Adeyemi said. “Fishing is a very big thing. They also rely on trading to make ends meet.”

Adeyemi’s UI mentor, Associate Professor of Anthropology Ted Powers, said he has been able to assist Adeyemi with his research.

“We meet regularly to discuss his research, oversee his training, and work to try to ensure that he has the academic tools necessary to be able to achieve what he would like to do with his career and complete his doctoral research,” Powers said.

Adeyemi said COVID-19 has affected the Makoko community by preventing them from working.

“Day-to-day workers couldn’t go to their shops, they couldn’t carry their trade of fish,” he said. “It was very difficult for a lot of people to cope. The Nigerian government did not really give any of the marginalized people any sort of social support.”

“I think Ebenezer’s research can help people on our campus understand in greater depth and detail everyday life in the context of how informal and quasi-formal settlements actually work based upon the challenges and survival strategies people employ on an everyday basis,” Powers said.

Adeymi’s inequality research in Makoko is expected to take six years. Caleb Kilpowicz, a UI doctorate candidate in anthropology, described the cultural anthropology research method that he and Adeyemi use, ethnography.

“Ethnography is the idea of having a long-term immersive first-hand research experience,” Klipowicz said. “Researchers would live in places they’re not familiar with, live with other people and maybe learn their language and their aspects of society.”

Kilpowicz said while researchers may adapt to a new environment, many cultural differences still align.

“We still have our own lenses, our own backgrounds or baggage that we bring into the situation, but being there for a long period of time, you start to see statistics and details,” he said.

Adeyemi said the main goal of his research is to correct a “notion of helplessness” among citizens of his community in Makoko, Nigeria.

“These people are victims of government corruption,” Adeyemi said.