Both teams finished 6-2 last season and are ranked in the preseason top 20 heading into their matchup at Kinnick Stadium. 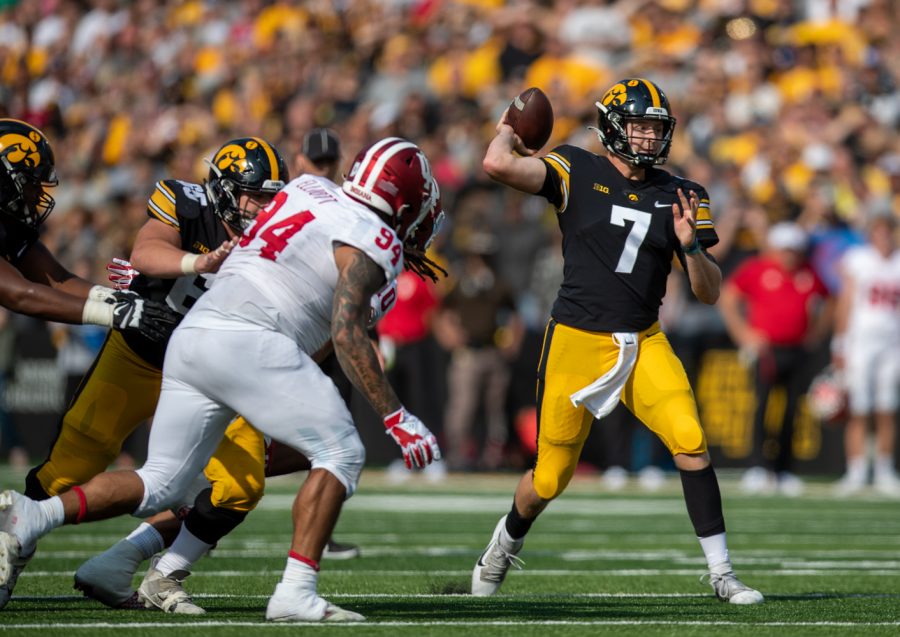 Iowa quarterback Spencer Petras winds up to throw during a football game between No. 18 Iowa and No. 17 Indiana at Kinnick Stadium on Saturday, Sept. 4, 2021. (Jerod Ringwald/The Daily Iowan)

Week 1 of the 2021 season is here for the Iowa football team.

The No. 18 Hawkeyes are hosting the No. 17 Indiana Hoosiers to open the new campaign. For the first time in 651 days, Kinnick Stadium has fans in the stands. Iowa only played in front of players’ family members last season because of COVID-19 protocols. Saturday is also the first game in Kinnick Stadium history where beer and wine will be available to purchase inside the stadium.

DI Pregame Editor Robert Read and Sports Editor Austin Hanson are in the press box to cover the season-opening top-20 matchup. Follow along on Twitter at @dipregame and check back to this story for updates throughout the game. Other stories will also be posted to dailyiowan.com this weekend. The game is scheduled to kick off at 2:30 p.m. and will air on the Big Ten Network.

On the defensive line, Mason Richman and Logan Lee are warming up with the first team at tackle.

Offensive guard Kyler Schott is out this week as his foot still heals from the injury he suffered while baling hay this summer. Schott, who is expected to be back within the next couple of weeks, was the only injury reported on the pregame radio show.

Coin toss — Iowa won the toss and elected to receive.

13:35 1Q — Only 85 seconds into the season and on the fourth play of the first drive of the game, Iowa running back Tyler Goodson ran along the right side and all the way to the end zone. Goodson went basically untouched on his 56-yard scoring scamper.

After running back Tyler Goodson scored a 56-yard rushing touchdown on Iowa’s opening drive, Hawkeye cornerback Riley Moss picked off Indiana quarterback Michael Penix Jr. on the Hoosiers’ opening drive and returned it 30 yards for a touchdown of his own. There’s still 12:45 remaining in the first quarter, but Iowa leads 14-0.

2:21 1Q — Iowa quarterback Spencer Petras has been accurate early, but drops from Sam LaPorta and Jackson Ritter led to a Hawkeye punt. Indiana will get the ball back.

11:54 2Q — A Spencer Petras quarterback draw from nine yards out has Iowa up 21-3 over Indiana. The Hawkeyes converted a fourth-and-two earlier in the drive on a Charlie Jones reception down to the 10-yard line.

Linderbaum stayed down after Petras’ touchdown, but walked off under his own power. His status for the rest of the game is unclear. He is currently riding an exercise bike on the sideline.

1:50 2Q — Goodson fumbled near midfield a play after a 24-yard catch-and-run by tight end Sam LaPorta. Indiana will take over at its 48-yard line with 1:50 remaining in the half. The play was reviewed, but the ruling on the field stood as called. This is Iowa’s first turnover of the day.

1:41 2Q — The play after Goodson’s fumble, Penix threw to the right side of the field and right into the hands of Moss, who ran the interception back 48 yards for his second pick six of the day. Iowa now leads 28-3 with 1:41 remaining in the half.

1:35 2Q — To start the next drive, Penix threw his third interception of the game, this one to Iowa defensive back Dane Belton. Iowa has a chance to extend its 25-point lead going into halftime.

End of first half — Iowa kicker Caleb Shudak’s 41-yard field goal attempt is good to end the first half. Iowa was in the red zone, but Petras took a sack on third down and the Hawkeyes had to settle for three points.

8:39 3Q — Indiana has cut (slightly) into Iowa’s lead. The Hoosiers went 52 yards in 12 plays and ate of 6:21 worth of game time to tack on a 41-yard field goal. Iowa’s Lukas Van Ness recorded a sack on third down to stop Indiana in the red zone.

This is a developing story. Check back for more information throughout the game.