Wacky Willy’s Weiner Warehouse & Uncle Earl’s Earwax Emporium competed in Wednesday’s Battle of the Bands. With high goals in mind of winning the competition and reaching new audiences, the band was able to do both. 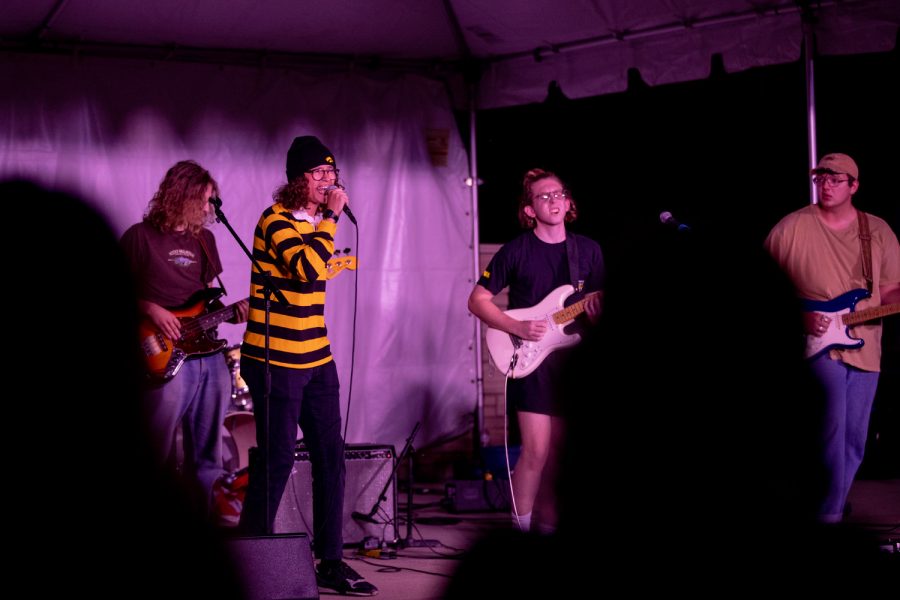 Willy’s Wacky Weiner Warehouse & Uncle Earl’s Earwax Emporium is shown performing their original songs and covers at the Battle of the Bands event at the Iowa Memorial Union Amphitheater on Sept. 1, 2021. The band performed a wide range of songs from originals to covers of Kendrick Lamar and Future. (Larry Phan/The Daily Iowan)

In the golden light of the setting sun, people gathered at the IMU River Amphitheater near a white tent set up over a collection of instruments. As the sound of Journey’s, “Don’t Stop Believing,” some stop to observe the music, while others stay to watch.

Before the show began, the members of Wacky Willy’s all had one common goal in mind: win. For them, winning — and participating in Battle of the Bands in general — brings good exposure and an opportunity to reach new audiences.

“We play the bar scene a lot, so we see a lot of the same faces,” band member Quinn Wilcox said. “It’ll be good to see a new audience.”

That night, the band was in luck. SCOPE Productions Assistant General Manager Maggie Odegaard said participating in Battle of the Bands is a great way for Iowa City voices to get some recognition, in part because it is always held the same night as the Student Organization Fair.

The night began with Bonnibel, who stuck to rock music, followed by rap duo Skooma Boys — aka Tiger and Young Potion — who playfully commented on each other’s performances. Wacky Willy’s performed third.

Wacky Willy’s planned to bring a lot of high energy to the stage, starting off with an automated voice introducing the band. They opened with an original song titled “Night Will Unfold.” From then on, the setlist ranged from covers of Kendrick Lamar’s, “untitled 03,” to the Jonas Brothers’, “Lovebug.”

Wacky Willy’s made an impression on UI sophomores Delanie Jensen and Marissa Virich, who had heard about Battle of the Bands through a Snapchat story. Though they struggled a bit to remember the lengthy title of Wacky Willy’s Weiner Warehouse & Uncle Earl’s Earwax Emporium, the girls said they were impressed by the band’s performance.

“I can’t even say their name, but they were really good. It seems like everyone was here for them. They were definitely my favorite so far,” Jensen said.

Rock band Critical Mass rounded out the night after Wacky Willy’s, and had everyone nodding their heads with their first song. They finished out with their rendition of “Mr. Brightside” by the Killers, which got the crowd up on their feet.

Before the winners were announced, the four bands stood under the white tent, shaking hands and making conversation. Second place was announced first, awarded to Critical Mass.

After a night of anticipation, Wacky Willy’s was announced as this year’s Battle of the Bands winner. The band members jumped up and down and gathered in a group hug. A couple of students made sure to snap a quick selfie with the champions before making their way out.

Members of Wacky Willy’s said that winning Battle of the Bands felt even better than how they normally feel after a performance. Given that it was a competition determined by a public vote, the band felt proud of the work that went into their performance.

“This is a different validation than normal, it’s more of a direct validation, and it feels amazing,” said band member Ethan Traugh.

While Wacky Willy’s songs are not available on any streaming platforms, work by individual band members can be found on Spotify at Scottie and the Blues, New World Vulture, and Quinn Wilcox.