For the second night in a row, University of Iowa students called for the Phi Gamma Delta fraternity to be removed after allegations of a sexual assault in 2020. The demonstration on Wednesday took place at the President’s Residence. 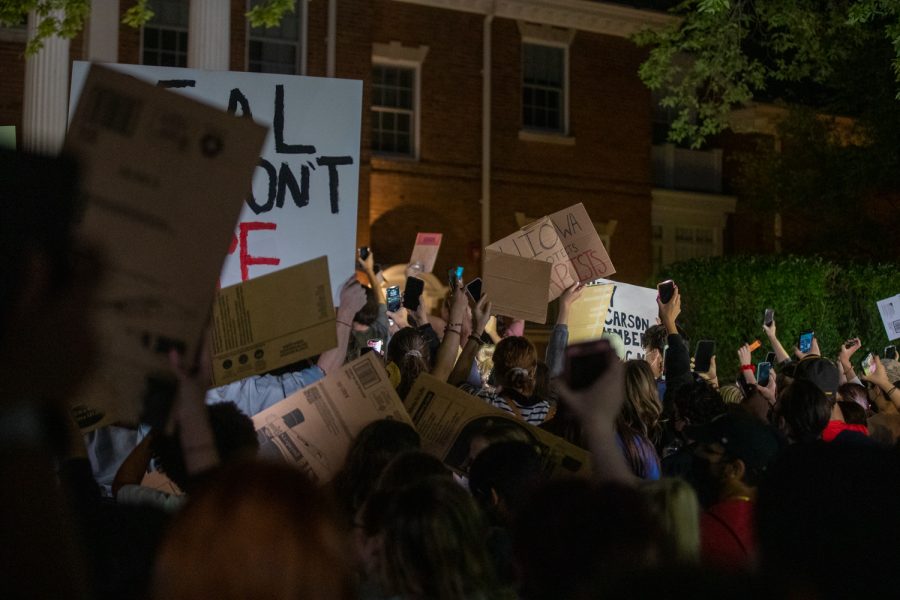 Protesters wave signs in the street in front of the President’s Residence during the second night of protests following sexual assault allegations against the University of Iowa’s chapter of Phi Gamma Delta on Wednesday, Aug. 31, 2021.

Around 200 people gathered at the University of Iowa President’s Residence on Wednesday evening, one night after a protest drew thousands to the FIJI house. The group continued to call for the Phi Gamma Delta fraternity to be removed from campus.

Plans of the protest circled on social media following the events on Tuesday. At noon, students were urged to walk out of class. By mid-afternoon on Wednesday around 200 students attended a sit-in protest in front of the president’s house.

An online petition, which began circulating on Monday, alleged that two members of the fraternity sexually assaulted a student in September 2020 and called for the fraternity to be shut down. As of Wednesday night, the petition had almost 100,000 signatures.

Students protested outside the fraternity’s residence, as well as another off-campus house where fraternity members reside on Tuesday night, with some damaging the house.

The demonstrators reconvened at 8 p.m. in front of the president’s house, displaying signs that read “real men don’t rape” and “no justice, no peace.” Students began to move closer to the  President’s Residence, chanting, “You’re all guilty” referring to the members of Phi Gamma Delta and, “You’re complicit” referring to the UI administration and their response to the sexual assault allegations against FIJI.

Students, like Victoria Parker, do not believe the administration is taking enough action to condemn the fraternity, commonly known as FIJI, and the allegations against them.

“I honestly think they should kick the fraternity off campus and then charge the members,” said Parker. “We have a right to feel safe wherever we go, whatever we do, and I think the administration should do something because how would they feel if that was someone they cared about or their kids.”

For student Chloe Wilson, FIJI is not the only problem that needs to be addressed by UI.

RELATED: Protesters call for removal of the University of Iowa FIJI chapter

“I think the Iowa administration should act faster on all sexual assault cases and that people shouldn’t be allowed to be students here after that,” said Wilson. “It’s not just with FIJI, it’s with all of [the cases].”

“To proceed with an investigation, the university needs anyone with information and evidence to contact the Office of Institutional Equity,” the statement said. “The university responds to every complaint, and we encourage you to review the resources and options available to you or someone you care about.”

In a news release on Wednesday, the Iowa City Police Department and the County Attorney’s office asked for information relating to the allegations.

Police blocked off entry into Church Street from Dubuque Street and Clinton Street, preventing cars from driving through the students’ protest. The police did not intervene at the demonstration.

In a statement from the UI’s Interfraternity Council, council President Will Hochman acknowledged the issues regarding the sexual assault allegations and said action had been taken by the fraternity against two members following the allegations.

“Sexual assault or harassment is not something that the University nor the Interfraternity Council takes lightly, as it is unacceptable and must be eradicated from our campus,” the statement said. “On September 13th, 2020, Phi Gamma Delta (FIJI) removed two members from their chapter related to the incident.”

Around 8:50 p.m. the group of almost 250 began to march toward the Pentacrest down Clinton Street, chanting “F— FIJI” and encouraging those they passed to march with them.

The group had around 300 when they ended on the steps of the Old Capitol building, where they began to give speeches, encouraging individuals to not give up their fight, always support survivors, and remember that sexual assault victims are not alone.

People began to place their signs on the steps of the Old Capitol, which was blocked by barricades. The protesters ended the night by having sexual assault survivors share their story.

“It’s really important to stand with survivors and show that we care,” Parker said. “We won’t let silence be an answer.”