After an 0-2 start to the season, the Hawkeyes will look for their first wins against Colorado and No. 11 Washington. 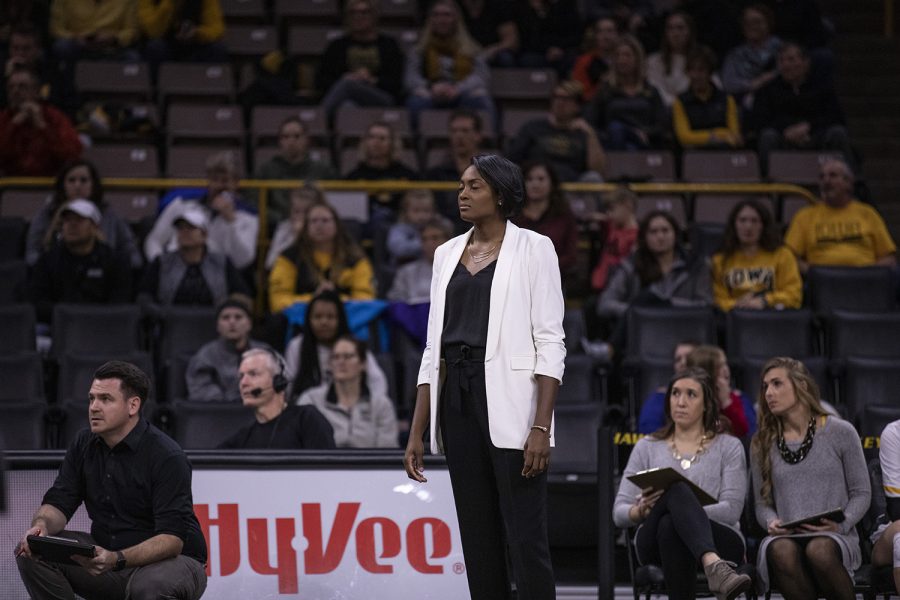 Iowa head coach Vicki Brown watches a play during a match between the University of Iowa and University of Maryland at Carver Hawkeye Arena on Saturday, November 30, 2019. The Hawkeyes defeated the Terrapins 3-1. Saturday was the final match that Iowa volleyball will play in Carver, as it moves to the Xtream Arena next fall.

Hawkeye volleyball will hit the road for a second straight weekend to take on Colorado and No. 11 Washington in the Pac-12/Big Ten Challenge.

“When we go back and look at the film against Duke and Coastal Carolina, we saw some shortcomings within our offensive balance,” head coach Vicki Brown said. “It’s really just establishing that connection and finding the different shots for them to have the opportunity to score against two different styles of defense.”

Although senior outside hitter Courtney Buzzerio contributed a career-high 28 kills against Duke, the Hawkeyes struggled to find a second option on offense.

Sophomore setter Bailey Ortega finished with a career-high 45 assists in the Hawkeyes’ matchup against the Blue Devils as well, but senior blocker Amiya Jones was the only other Hawkeye to tally double-digit kills in the matchup, recording 11.

Buzzerio also notched 14 kills against Coastal Carolina — the only Hawkeye to finish in double digits.

“There are a couple of holes in our offense that we have to figure out with some different rotations,” Brown said. “It was the first weekend, so we are working on those things this week to add a little more balance to Courtney [Buzzerio] and the two senior [middle blockers].”

Buzzerio ranks fifth in the nation and first among Power 5 schools with 5.25 kills per set after the first weekend. The Hawkeye senior’s 42 kills are the most in the Big Ten.

“Statistics are great and career highs are awesome, but if there is not a W at the end of the day, it’s honestly kind of nothing,” Buzzerio said.

Iowa will look for its first win of the season against an undefeated Colorado team.

The Buffaloes possess a fast-paced offense, led by Pac-12 Player of the Week Leah Clayton. Clayton has 37 total kills across three matches in Colorado’s wins over South Carolina State, Xavier, and Charlotte.

Washington started the fall season at No. 4 in the American Volleyball Conference preseason poll. But after a four-set loss to No. 6 Ohio State Saturday.

The Huskies are returning all three of their AVCA All-Americans from their Final Four run in April: junior setter Ella May Powell, senior opposite hitter Samantha Drechsel and junior outside hitter Claire Hoffman.

Only one player from Washington’s spring roster did not return this season.

“Our conference has teams ranked in the top five as well so this weekend is not completely unfamiliar,” Brown said. “We have had a whole season if not multiple seasons of having this challenge of a weekend, so we are looking forward to a good bit of preparation for the conference.”

The Big Ten boasts seven teams ranked inside the AVCA top 25 with Wisconsin, Nebraska, Ohio State, Purdue, and Minnesota all cracking the top 10.

Since Brown took over as head coach prior to the 2019 season, the Hawkeyes are 1-11 against ranked opponents — their sole win came against No. 22 Washington State in 2019.

“We’ve had pretty good competition against [Washington] the past three years,” Buzzerio said. “My freshman year we were in a close four-set match, so if we are all bought in with our heads in the game for the whole match it’s going to be a fun and exciting match.

The Hawkeyes will compete against Colorado on Friday at 6 p.m. at Huff Hall in Champaign, Illinois. Iowa will then take on No. 11 Washington at 5 p.m. on Saturday. Both matches will air on BTN+.