The Hawkeyes won, 5-0, in the first match of a two-game home series. 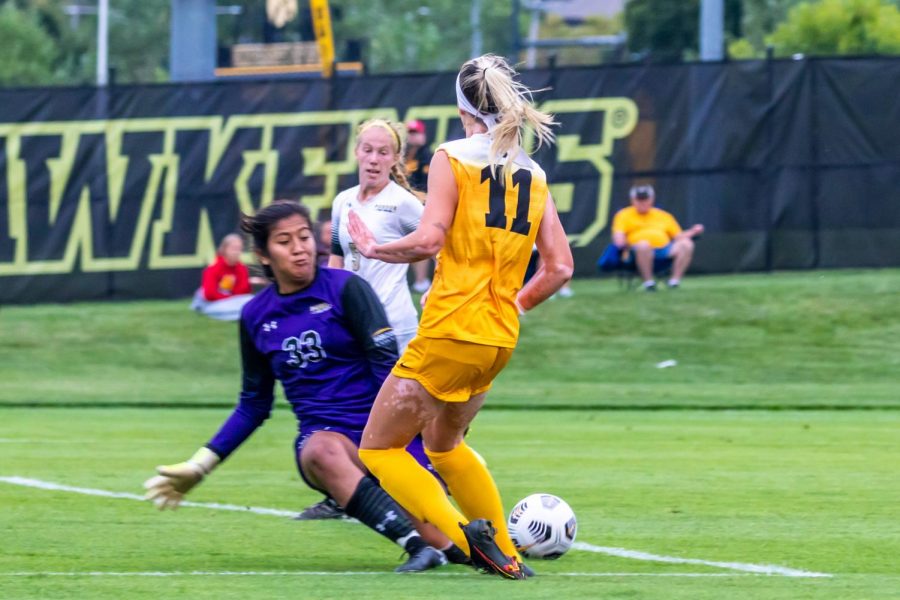 Graduate transfer Alyssa Walker found the back of the net two times within the first 11 minutes to give the Hawkeyes an early 2-0 lead.

“I think the intensity from the very beginning was really good,” Walker said. “Bringing up on practice, we started talking about quick combinations in the box and that’s really what happened, especially for that first goal. The second goal was attacking the space and getting in behind really early, so it was really exciting to come in and score two goals right off the bat.”

Walker now has three goals on the season — she notched her first at DePaul in the Hawkeyes’ season opener at DePaul Aug. 19.

Freshman forward/midfielder Kenzie Roling scored a goal in the 30th minute, leading the Hawkeyes to a 3-0 lead at halftime.

Following halftime, junior defender Sam Cary connected with the net in the 48th minute for her first goal of the 2021 season. Roling scored again in the 70th minute, upping her goal total in the Black and Gold to four — the highest on the team.

“The big thing for me is getting a win for the team and so if that means me putting in a couple goals in or someone else it doesn’t really matter,” Roling said. “I’m just glad we got the dub today.”

Though the Hawkeyes faced a mid-major opponent, they showed they could recover after they fell, 1-0, in overtime at Kansas — Iowa’s first loss of the season.

The Hawkeyes had a strong offensive attack with 28 shots Thursday — the most Iowa’s had all season. The defense held a powerful front, as it didn’t allow a shot until the final five minutes.

WHITAKER RETURNS TO THE FIELD

For the first time since 2019, Hawkeye senior defender Riley Whitaker returned to the field.  She subbed in during the first half and assisted on Roling’s first goal.

“It means the world to us, to be honest,” Iowa head coach Dave DiIanni said regarding Whitaker’s return. “You heard the cheer right from the beginning when she was going in, and prior to the injury, Riley Whitaker, you could arguably make a case that she was our best player. So, it was very difficult to see her go down and really, quite honestly, spend a whole year in recovery. But when you work hard, good things happen at the end. And she’s a good kid and somebody that cares about the game.”

The 4-1 Hawkeyes will take on Mississippi State Sunday at 1 p.m. in Iowa City to finish the two-game home series. The Bulldogs are 2-2-1 on the season, with their last game ending in a scoreless draw at Minnesota on Thursday.

The match on Sunday will be the first meeting ever between the two programs.