University of Iowa students sat in front of the university President’s Residence to call for the removal of the Phi Gamma Delta fraternity after two of its members were accused of sexually assaulting a student in 2020. 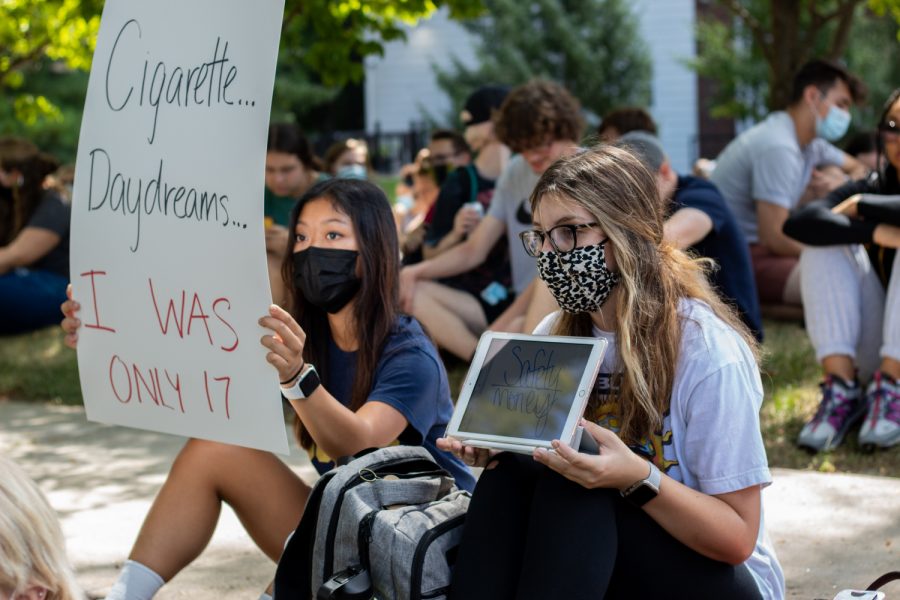 University of Iowa students skipped class to gather in front of the university President’s Residence Wednesday afternoon to call for the removal of Phi Gamma Delta – also known as FIJI – following September 2020 sexual assault allegations of members of the fraternity.

Before the protest at noon, the UI set metal gate barriers in front of the President’s Residence and Old Capitol. Almost 200 students sat peacefully on a hill facing the residence.

Associate Vice President and Dean of Students Angie Reams, who was at the Wednesday afternoon protest, said the office oversees the UI Demonstration Support Team and reached out to the protest organizers to give support and ensure that the outcomes and safe experience are met.

“This is the first time that we’ve worked with them. We reached out this morning,” Reams said. “We always support students’ rights and appreciate sharing their voices.”

Reams added that the UI is always concerned when there is safety at risk and there is violence.

“We know that the organizers truly desired a peaceful protest and we hope to continue to support them in that effort,” she said in reference to Tuesday’s demonstrations.

A release from the Iowa City Police Department about Tuesday’s demonstration said no injuries were reported after the protest and no arrests were made.

“However, the Iowa City Police Department is seeking information on the property damage at both properties and intend to fully investigate those acts,” the Wednesday release said.

Vice President for Student Life Sarah Hansen said the Division of Student Life wants to be able to talk to the organizers to hear and gather more information to help the UI respond.

Abby Welden, a first-year student sitting in the front row of demonstrators across from the President’s Residence, said she left class to let President Barbara Wilson know that the university needs to foster a safe environment on campus.

“Associating with an organization like FIJI doesn’t represent that,” Welden said. “I want FIJI to be abolished and I want the president to say something about what has been going on.”

Brianna Villarreal, a sophomore at the UI, said she thinks the demonstrations need to keep going so the UI doesn’t “sweep it under the rug”.

“This has to be an everyday thing until they are convicted,” she said.

The Change.org petition describing the alleged sexual assault that took place at FIJI in September 2020 reached over 95,000 signatures as of Wednesday afternoon.

The demonstrators plan to reconvene Wednesday night at the President’s Residence at 8:00 p.m.