All four Iowa City City Council candidates sat down with The Daily Iowan ahead of the Nov. 2 election. 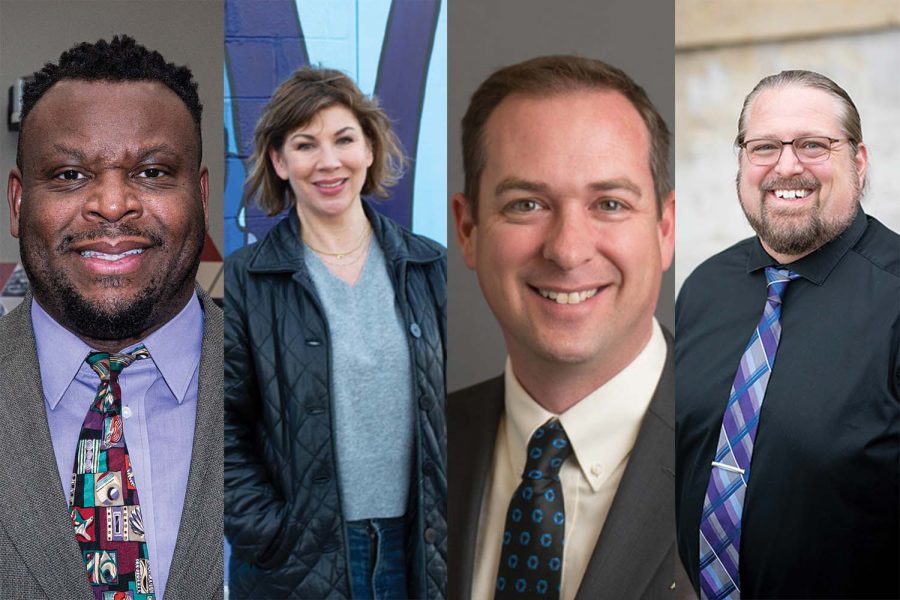 From left: Bruce Teague, Megan Alter, Jason Glass, and Shawn Harmsen. Teague, Alter, and Glass are running for two at-large seats on the Iowa City City Council, and Harmsen is running unopposed for the District B seat.

The Nov. 2 election received three filed bids for two at-large seats and one bid for the District B seat.

Megan Alter, Jason Glass, and Bruce Teague are the three candidates running for the at-large seats. Shawn Harmsen is running for the District B seat.
Megan Alter
Alter has been living in Iowa City for 25 years and is a resident of the South District neighborhood. She is originally from Michigan and previously lived in New York City. Alter is currently the co-chair of the Housing and Community Development Commission of Iowa City, and a member of the South District Neighborhood Association.

Alter did not succeed in her first run for city council in 2019. Her 2021 platform is similar to her previous bid, focusing on better access to affordable housing and child care, which she is still interested in finding solutions to, she said.

“I ran on better access so that more people could enjoy Iowa City in the way that many of us do,” Alter said. “With COVID, that exacerbated everything.”

This time, Alter said she is running because of COVID-19. Alter said the pandemic didn’t create inequality and obstacles but rather deepened them.

“I decided … eight months ago the time is more urgent now than ever, and it also coincides with long-overdue attention on racial justice,” Alter said.

Alter said she hopes to be a city councilor that will continue to advocate for change in order to strengthen the city’s response to social justice issues.

“I think it is increasingly important that city council has to get involved with addressing and leaning into gun violence as a municipal issue to look at, not simply something that the police handle,” Alter said.

Alter is running on different issues, but she describes her campaign as one that considers equity, economy, and community. Alter said all three ideas are mutually connected.

“The more that people are participating in a healthy community, the more there will be opportunities to put dollars into the community,” Alter said.
Jason Glass
Glass is a lecturer at the Tippie College of Business at the University of Iowa. Glass is Iowa-raised and has been living in the Iowa City area for seven years. Glass is also a UI alum and received his degree in management and organizations.

“I love Iowa City and I want to keep it great and promote all the things that are great about Iowa City and be part of solving the issues that the city has,” Glass said.

Glass said that there are decisions that are going to have to be made soon that will have an impact in the long term. One of these decisions is how to spend the American Rescue Plan, Glass said. Both the current and future council will have a significant part in deciding how the funds will be spent, Glass said.

Glass is the current vice-chair of the Iowa City Human Rights Commission. Glass said he has been active in conversations about what the role of city law enforcement should be.

“I want to be part of working through, even though last summer was a seminal moment for promoting that discussion again, it is a long-term issue to continue to work on,” Glass said.  “I want to help make Iowa City grow because we are growing.”
Bruce Teague
Teague is the only one of the two current at-large seats seeking re-election. Mayor Pro-Tem Mazahir Salih announced that she will not be running for re-election in June.

“I absolutely love our city,” Teague said. “And while being on council I learned that there are lots of varying topics, and lots of various topics that need to be addressed within our community.”

Teague announced his candidacy for reelection back in June at the Iowa City Juneteenth Block Party celebration.

In January 2020, Teague was elected as Mayor by his peers on the council, but he was first elected to the council in a special election in 2018.

Teague said he is running on various topics for his reelection. One of which is what he called the “Black Lives Matter revolution.”

“And moving forward with our goals, to really find true justice for every member within our community, and fully dedicated to those goals and those missions,” Teague said.

He said he is also running on climate action and zoning and affordable housing. Teague said because he is the incumbent, the community knows how he handles topics and issues.

“I am the only candidate that currently has experience on the council,” Teague said. “I think that’s how I differ from the others because the community knows they have seen the unity that I bring, as well as the experience that I will bring to the table once again.”
Shawn Harmsen
Harmsen, a resident of Iowa City and professor of journalism studies and communication at Coe College, was the campaign manager of current Mayor Pro-Tem Salih and Johnson County Supervisor, Royceann Porter.

Harmsen said he decided to run for council because he has helped other people run for different positions of leadership in the community.

“I appreciated, for the most part, the direction the community has gone, especially in the last six to eight years trying to move towards a community that really reflects the values of wanting to have greater equity in terms of economic equity, racial equity, and social equity and justice for all members of the community,” Harmsen said.

One of Harmsen’s goals, if elected, is affordable housing in Iowa City, he said.

“People appreciate Iowa City for a variety of reasons, but we need to make sure that we are a community that is not pricing people out,” Harmsen said.

He said Iowa City needs to address its infrastructure and make sure social equity is reached across the board.

“We definitely want to keep going in a direction of greater equity across the board, and make sure that we don’t take steps backward,” Harmsen said.