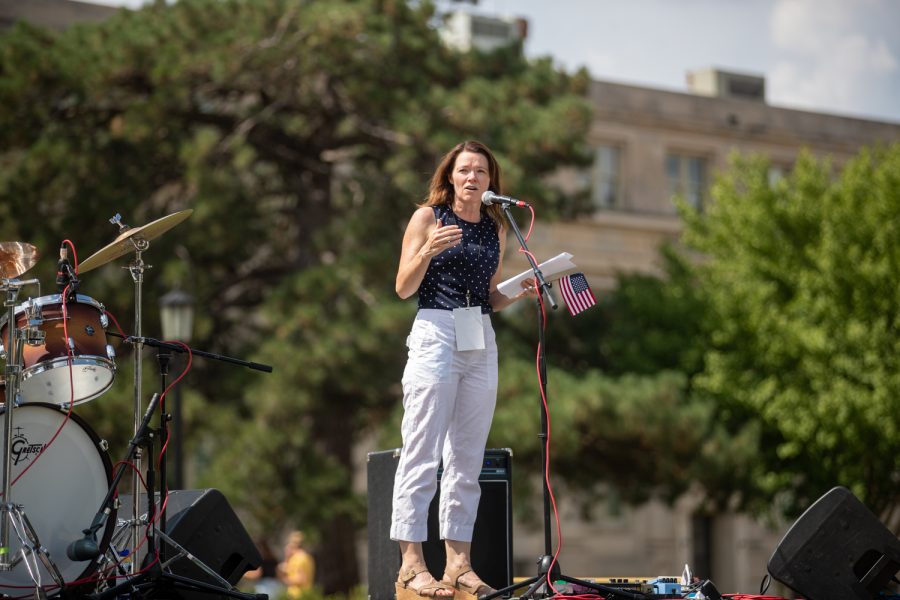 Iowa Rep. Christina Bohannan encourages event-goers to support equal voting rights on stage during a rally for voting rights at the Pentacrest on Saturday, Aug. 28, 2021.

“Iowans deserve a leader who knows firsthand the struggles that so many in our communities face and understands just how much is at stake. That is the story of Christina Bohannan’s entire life, and it is why I am so proud to endorse her in this race,” Loebsack said in a prepared statement. “Christina knows that we need less bickering in Washington, and more working together, and I have all the confidence in the world that she is up for the task.”

“I am honored to receive the endorsement of longtime Congressman Dave Loebsack, who spent more than a decade in Congress fighting for the people of Southeast Iowa,” Bohannan said in a prepared statement. “I’m running for Congress so that Iowa’s 2nd District will once again have a representative with an independent voice in Washington and who puts Iowans’ needs above partisan politics to deliver real results.”

In 2019, Loebsack announced he wouldn’t seek reelection after representing Southeast Iowa for seven terms in the U.S. House.

Bohannan is challenging Rep. Mariannette Miller-Meeks, R-Iowa, who won by six votes in the 2020 election against Democrat and former Iowa Sen. Rita Hart. As previously reported by The Daily Iowan, Miller-Meeks unsuccessfully ran against Loebsack in 2008, 2010 and 2014 before being elected in 2020.

On Saturday, Miller-Meeks spoke at a barbecue hosted by fellow freshman Rep. Ashley Hinson, R-Iowa, along with other Republicans from Iowa and elsewhere, including Sen. Ted Cruz, R-Texas. At the event, Hinson launched her reelection campaign. Speakers emphasized their goal of Republicans taking back the U.S. House and Senate in 2022.

As previously reported by the DI, Bohannan said she felt the last two people to represent the district, Loebsack and Rep. Jim Leach, R-Iowa, were independently minded in Congress. She would put the district ahead of herself or national partisan politics, Bohannan said.