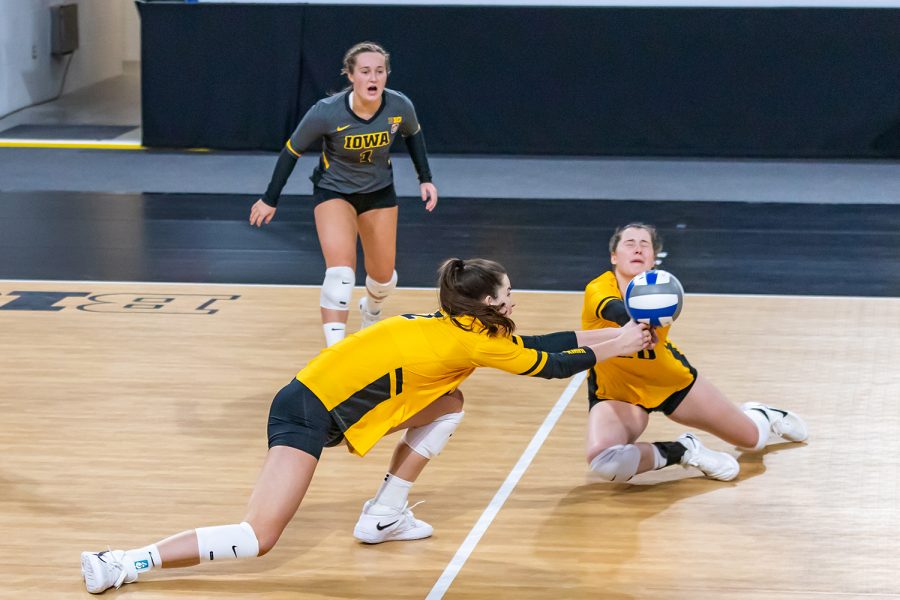 Iowa outside hitters Courtney Buzzerio and Edina Schmidt dive for the ball during the Iowa Volleyball game against Indiana on Feb. 6, 2021 at Xtream Arena. Indiana defeated Iowa 3-2.

Iowa volleyball junior outside hitter Courtney Buzzerio’s career-high 28 kills against Duke was not enough for the Hawkeyes Saturday as Iowa dropped both matches of a doubleheader at the Coastal Carolina Invitational.

Iowa lost a five-set nailbiter to the Blue Devils to open the season Saturday morning before Coastal Carolina swept the Hawkeyes later that day.

As a setter and an outside hitter last season, Buzzerio finished with the team lead in kills and the second-most assists for the Hawkeyes. She earned first-team All-Big Ten honors following the spring 2021 season and an American Volleyball Coaches Association North Region Honorable Mention.

In her first match back to exclusively playing outside hitter, Buzzerio notched 28 kills and seven digs with a .407 hitting percentage.

The Hawkeyes came out hot against Duke as junior outside hitter Kyndra Hansen’s five kills led Iowa to a 25-16 first-set victory.

After a 25-14, second-set loss, the Hawkeyes battled back to win the third set and finished only three points short of taking the match in the fourth.

With the score tied at 13 in the fifth set, Buzzerio tallied Iowa’s eighth error of the set, and Iowa lost the match on the next point via a spike from Duke sophomore middle blocker Lizzie Fleming.

From the opening serve, Coastal Carolina dominated the Hawkeyes in the evening match, notching five blocks and taking the first set, 25-20.

Iowa only managed one team block against the Chanticleers and couldn’t block any attacks in their second and third-set losses.

Buzzerio led the team with 14 kills and senior middle blocker Amiya Jones managed the team-high in hitting percentage with a .353 mark on 17 attempts.

No longer handling any setting responsibilities, Buzzerio returned to being the focal point of the Hawkeye attack for all rotations.

With only senior middle blocker Amiya Jones managing to add double-digit kills to Buzzerio’s career high against Duke, the Hawkeyes are still in search of a second option on offense.

Sophomore setter Bailey Ortega slated a new career-high in assists with 45 against Duke.

Ortega led the team in assists in 2020-21 as a freshman while splitting time in a 6-2 system with Buzzerio.

This season head coach Vicki Brown gave Ortega sole responsibility for setting duties, keeping her on the court as Iowa’s setter for every rotation of Saturday’s matches.

After former Hawkeye Joslyn Boyer transferred to Wisconsin in May, senior Maddie Slagle had her first start as Iowa’s libero against Duke, putting up a career-high 22 digs and three assists.

In the second match against Coastal Carolina, Slagle followed up her career-high with 10 digs and zero receiving errors.

The Hawkeyes will travel to Champaign, Illinois, to face 3-0 Colorado on Sept. 3 in the Pac-12/Big Ten Challenge.

Iowa will wrap up that weekend on Sept. 4 against No. 4 Washington. The Huskies are 1-1 to start the season with a win over the University of Ohio and a loss to Ohio State.