Anamosa’s Heartland band kicked off the fall season of Wilson’s Thursday Night Farm Sessions on August 26th, 2021. The folk cover band has a history rooted in Iowa and Iowa City. 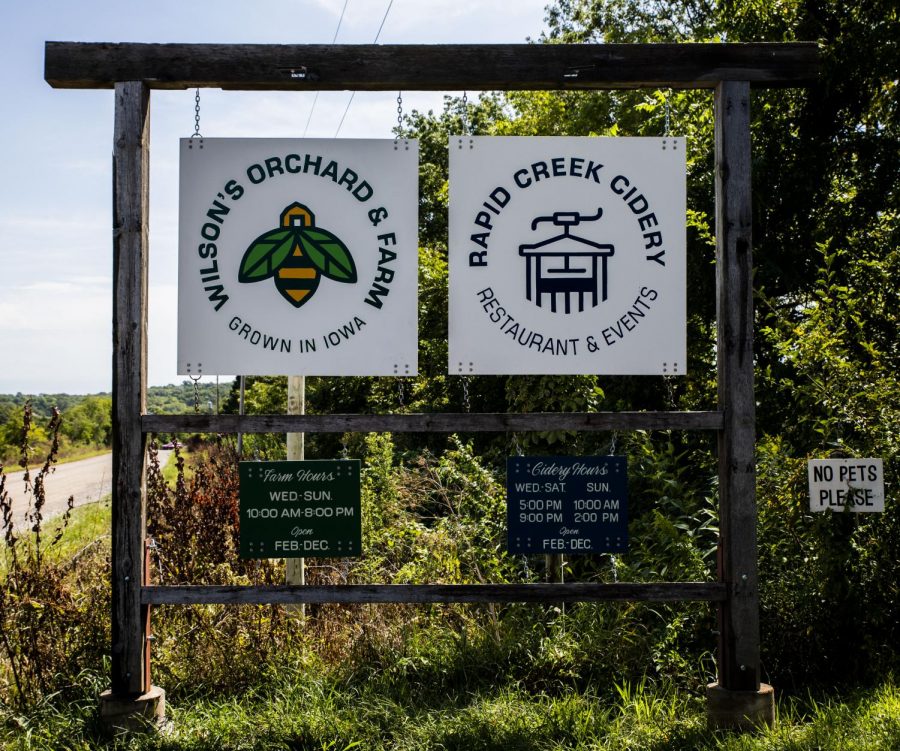 Tucked about six miles beyond the town proper of Iowa City, off of a one lane gravel road, sits Wilson’s Orchard and Farm. It’s home to not only strawberries, pumpkins and apples, but to live and local music as well.

Heartland is the folk cover band that played Wilson’s Thursday Night Farm Sessions on August 26th. The Farm Sessions are designed to be, “a free, socially-distanced outdoor concert series at Wilson’s Orchard & Farm supporting local musicians,” and the show did just that.

The band played overlooking the hills of the orchard with their backs to the setting sun, while people sat a distance away, ate good food, drank good drinks, and soaked in the good music and tranquility of the countryside.

Heartland consists of a husband and wife duo, Vickie and Gary Behnke, who are from Anamosa, Iowa. Vickie plays the bass and Gary is on the guitar. Gary has been playing the guitar for his whole life, according to Vickie, who says she picked up the instrument for the first time when he “decided he needed a bass player.”

She explained that it was Gary who taught her how to play as well, and that it is “really nice to have something like that to share.”

According to Vickie, Heartland has been playing around Iowa for about 13 years, and they started by sharing music in nursing homes. When asked if they enjoyed it, Vickie let out a hesitant yes, explaining that the music they were playing now, which was primarily classic rock and classic country covers, was much more enjoyable for them then the older, more croony material suggested to them most often in nursing homes.

The audience could sense the mutual love for the songs they chose. From “Folsom Prison Blues” by Johnny Cash to “Kokomo,” by the Beach Boys, there were happy faces and enthusiasm, even on a calm and quiet Thursday night.

Both band members smiled when they played or sang, and sometimes an audience member might catch a joke or two. It is five o’ clock somewhere, after all, and Heartland is here to remind us of that laid back mindset.

This opportunity for music has been enthusiastically renewed. According to Vickie, Heartland is just starting up again after a long year in the COVID-19 pandemic. Now that there is a bit of an upswing, she explained, they finally have the opportunity to share the music they love to play again.

Although there was no boisterous activity at Wilson’s Orchard that Thursday night, there was a palpable feeling of excitement for the musicians getting out there and making music again for the first time since the world changed.

When she explained why the band decided to name themselves Heartland, it seemed as though there wasn’t any other choice but to name the band after the place they love.

Heartland is a duo with a passion for what they do. Gary and Vickie got back out onto a stage as soon as they had the chance, and they had the opportunity to do that at Wilson’s Thursday Night Farm Sessions without safety being an overwhelming concern.

Wilson’s and Heartland are reintroducing this medium back into normal life, where it rightfully belongs. As bands make their way back into this new world, audiences hope they stay there.