Iowa City’s decision to implement a mask mandate was in the best interest of the community, and others should follow suit. 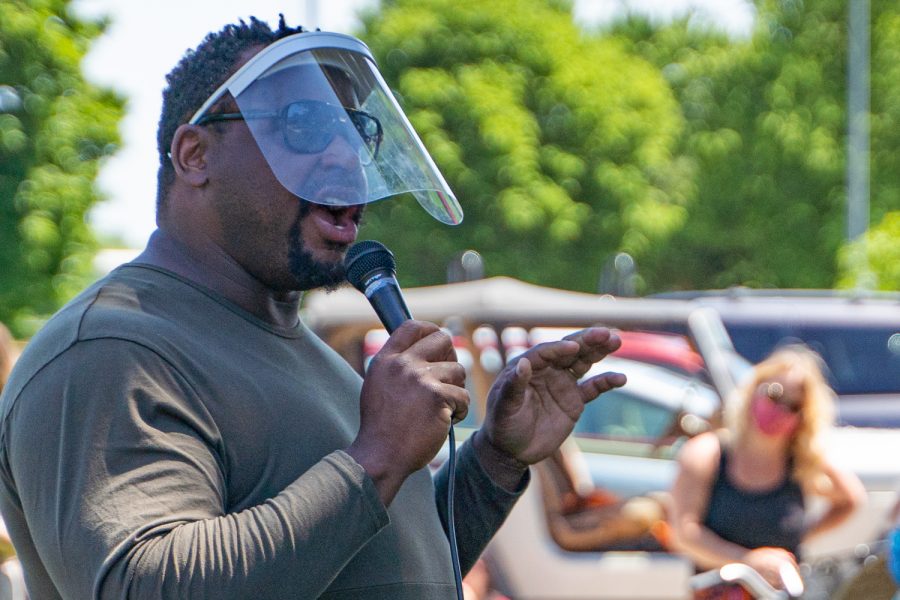 Iowa City mayor Bruce Teague speaks during the final session of the “Speak Up, Speak Out,” series at Mercer Park on Saturday, June 6, 2020. Mayor Bruce Teague invited community members to voice their thoughts and frustrations.

Iowa City prioritized the health and safety of residents and took COVID-19 protections into its own hands despite a state law that supposedly bars the local government from doing so.

On Aug. 19, Mayor Bruce Teague declared a state of civil emergency in the city, and read in a live address via Facebook that every person must wear a face covering in public places such as stores, restaurants, public schools, and University of Iowa academic buildings.

City Councilor Janice Weiner said the goal of the mandate is to try to follow the best public health guidelines for community safety.

“This community has demonstrated more than any other in Iowa that we want to be safe and healthy,” Weiner said. “We are by far the most vaccinated city and county in the state, and it’s not enough because kids aren’t vaccinated yet.”

But what may appear as defiance against state law may not actually be so.

Over the past two weeks, Weiner said she talked with Teague and the city attorney to see if there was any wiggle room in state law, and Iowa City may have found a loophole.

In May, Gov. Kim Reynolds sent parents, students, and leaders into turmoil when she signed a law that stripped local governments and schools of their power and banned them from implementing mask mandates.

But with the rise of the delta variant and the start of the new school year, Iowans raised concern about how it would affect the safety of students. Since children 12 and under can’t get vaccinated, and state law doesn’t allow schools to enact mask requirements, there is almost no defense system against the virus in classroom settings.

The law states, “a city shall not adopt an ordinance, motion, or use any other means that requires the owner of real property to implement a policy relating to the use of face coverings that is more stringent than a policy implemented by the state.”

Unlike last year’s mask mandate, this one only directly applies to people, not businesses. Iowa City’s order states, “every person in the City of Iowa City must wear a face covering when in a public space.”

So, if the order applies to individuals and not businesses, is Iowa City actually breaking state law? Weiner doesn’t think so.

“What should be clear while delineating a lot of indoor circumstances under which we want people to wear masks, we are not telling any real property or business owner you must enforce,” Weiner said. “Right now, I would say we are following the letter of the law.”

Iowa City faces the return of thousands of Hawkeye students — who aren’t required to be vaccinated — which sparked outcry from UI faculty for the COVID-19 policy, or lack thereof, set by the UI administration and state Board of Regents.

Despite the proclamation claiming that it applies in UI academic buildings, administration is still not requiring masks on campus. As previously reported by The Daily Iowan, UI spokesperson Jeneane Beck said the university follows state law and the Board of Regents haven’t implemented a mask mandate on campus.

Weiner emphasized that she hopes that students follow the mandate and view it as a protection instead of a punishment.

“I hope a lot of students will listen and understand we’re doing this to help our whole community stay safe and healthy, and they are part of our community,” Weiner said.

With Reynolds’ track record of her lackadaisical COVID-19 policy, it’s clear she was never going to make decisions that were going to protect Iowans. Although Reynolds has encouraged vaccinations, Weiner said she hasn’t seen her pay attention to public health guidelines and the flexibility needed when circumstances change.

Therefore, it’s on local leaders to take charge and act in the best interest of their communities. And if Iowa City didn’t really break state law with this order, there’s nothing keeping other local governments from taking similar actions.

“I believe as elected officials, our primary responsibility is to keep people safe,” Weiner said. “It’s to look out for the safety and security of our residents, and that’s what we’re trying to do.”

It’s up to the rest of the state to follow Iowa City’s example to take matters into their own hands and protect our communities — something that Reynolds will never do.