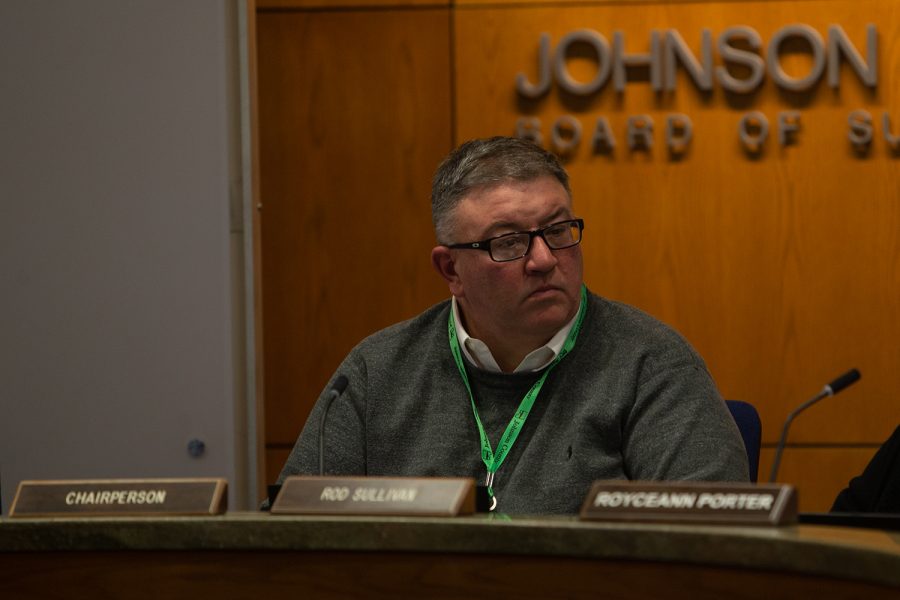 Johnson County Supervisor Chairperson Rod Sullivan listens to a presentation during a meeting on Thursday, Feb. 12, 2020.

The complaint from the Fund Excluded Workers Coalition, made up of 16 organizations across Johnson County, demands that county and Iowa City leaders “stop their unfair discriminatory practices against essential immigrant workers and pass a fully-vested Excluded Workers Fund, with no restrictions,” according to a copy of the complaint provided by Iowa City Catholic Worker.

As part of the demands, the coalition requests a $54 million fund, with $20 million going toward direct cash assistance for up to 6,000 workers: undocumented immigrants, previously incarcerated people, cash economy workers, and their families.

The remaining $34 million will go toward hazard pay bonuses, affordable housing, and other initiatives.

The complaint stated that need-based aid is not a substitute for universal pandemic relief, and that general assistance programs are not a “remedy” for discrimination against excluded workers.

“Our financial struggles for the past 18 months without relief have yet to be recognized as urgent,” the complaint stated. “We have nothing but urgency to keep working, to put food on the table and to keep a roof over our heads. We cannot be more clear about our challenges.”

The letter also cited a situation with Sullivan on Aug. 13, when he posted on Twitter questioning Ninoska Campos’ statement in an Iowa City Press-Citizen article.

“Parts of this story don’t add up … How does she work at the Marriott without a Social Security Number?” Sullivan tweeted.

The tweet referenced a section of the article where Campos spoke to Iowa City City Manager Geoff Fruin at a march on Aug. 12, where over 100 activists demanded the city for relief and hazard pay.

Campos said at the march that she tried to use the city’s general assistance program in the past to receive aid, but since she did not have a Social Security Number, she was met with roadblocks.

The complaint letter included multiple pages of screenshots from Twitter showing correspondence between Sullivan and those commenting on his tweet.

In response to another user’s tweet, Sullivan wrote that he had met with individuals from the coalition and had never met Campos, but that she should receive funds she is eligible for.

The press release sent Monday on behalf of the coalition included a letter from Campos in both English and Spanish, detailing her personal situation during the pandemic and saying that Sullivan was misstating her.

Campos wrote that she was excluded from $6,400 in unemployment insurance that other unemployed workers received, and $6,200 in stimulus checks that other families received. She wrote that she has only received $800 from Johnson County general assistance.

“This is not right and I demand justice – for myself, for my family, and for all excluded workers,” she wrote.

The complaint stated that Sullivan, “retaliated against the immigrant community on social media by publicly questioning our immigration status and work history,” and said that his words violated Title II of the Iowa City Human Rights Ordinance.

The Iowa City Human Rights Ordinance states that it is unlawful to discriminate in employment, credit, public accommodation, and education on the basis of race, creed, origin, sex, religion, and others.

It is also unlawful to retaliate against a person if that person lawfully opposed any discrimination practice, the ordinance states.

“Sullivan’s comments ignore the reality of how undocumented immigrants and essential workers survive in this country,” the coalition wrote. “We will not allow elected officials to erase the lived experience of thousands of people who work, produce value, and pay taxes without being able to fully access earned benefits.”

When reached by The Daily Iowan, Sullivan referred comments to the county attorney’s office.

The coalition provided results from a Spanish-language impact survey they circulated within the community. In an interview with the DI, Iowa City Catholic Worker member David Goodner said the organization reached out to Hispanic individuals they knew and members of local Hispanic catholic churches to promote the survey.

He added that using targeted ads on Facebook also brought in a lot of responses.

Goodner said the survey is open until the end of the month, and then Iowa City Catholic Worker plans to present an official report and recommendations to policy makers in September.

“If you look at all the questions, including the three we shared [in the complaint], it’s pretty astonishing figures,” Goodner said. “…We asked them if they support pandemic relief going to excluded workers, or hazard pay going to essential workers, and, of course, it was off the charts support. Almost 90 percent support.”

Campos is one of 15 individuals that signed the complaint, representing the 16 groups involved in the coalition.