At her campaign launch in West Des Moines on Saturday, DeJear said leaders have to focus on the people’s interests. 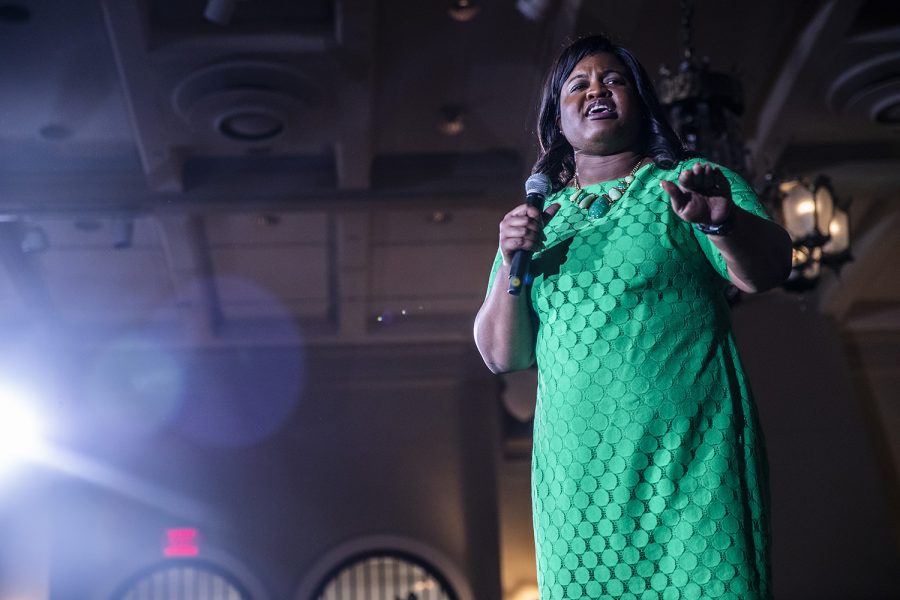 Former secretary of state candidate Deidre DeJear speaks during a town hall event for Sen. Kamala Harris, D-Calif. at the IMU on Wednesday, April 10, 2019. Harris is running for president in the 2020 election.

Deidre DeJear is running as a Democrat in Iowa’s 2022 gubernatorial race.

DeJear announced her campaign at an event on Saturday in West Des Moines.

“I’ve worked in engaging voters in every election that I’ve been a part of, I’ve expanded the electorate and I’ve done the work,” she said. “After several weeks of doing my homework with a group of incredible community leaders throughout the state, I am signing up to do more work.”

DeJear was the Democratic nominee for secretary of state in 2018; she lost to current Secretary of State, Republican Paul Pate. DeJear, born in Mississippi, moved to Iowa in 2004 to attend Drake University in Des Moines.

DeJear is a business owner and co-founder of Back 2 School Iowa, a non-profit that has distributed school supplies to thousands of students in Des Moines. She worked to support small businesses before the Great Recession and assisted small businesses during the pandemic. She also worked as the African American vote director for Obama for America Iowa.

Jennifer Harvey, a professor of religion at Drake, said she believes the well being of individuals is bound up in the well-being of those around them, and that she wants to live in a state where people take care of each other.

“[DeJear] worked with 120 local businesses to weather that economic devastation, and build new virtual business practices,” Harvey said during the campaign launch. “She organized funding for small businesses that were unable to qualify for the PPP. While our elected governor was failing to show up for us, Deidre showed up.”

DeJear said in her conversations across Iowa communities leading up to her campaign announcement, she heard why people love the state, but also the challenges concerning voters, such as lower education rankings, a lack of access to broadband and mental and physical health care, broken policing systems, and a lack of respect for immigrants.

“There is nothing that I said today that we cannot overcome. Challenges are inevitable, but in order to overcome these challenges, we need leadership,” DeJear said.

Iowa Rep. Ras Smith, D-Waterloo, was the first Democrat to jump into the 2022 race. Gov. Kim Reynolds, a Republican, has yet to announce if she will run for reelection. Democratic U.S. Rep. Cindy Axne and State Auditor Rob Sand are also considering a run.