Programs from Iowa City and UI donate, recycle items left behind by students

To avoid throwing away items left behind from students while moving out, Iowa City and the University of Iowa have programs in place to donate furniture and electronics. 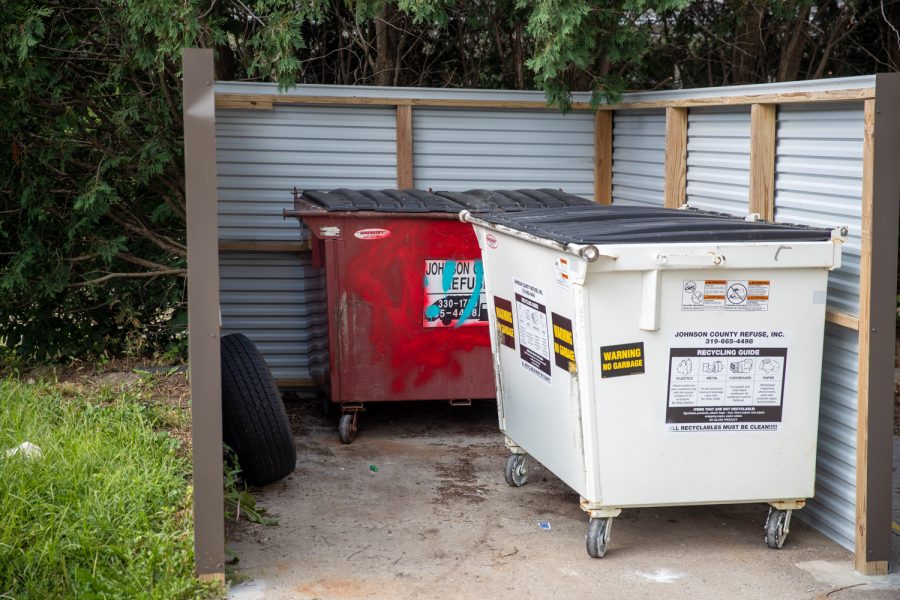 Dumpsters sit in front of an Iowa City apartment on Wednesday, Aug. 4.

In the last week of July and the first week of August before the fall semester starts, leftover furniture and appliances from renters moving out is scattered along the sides of Iowa City streets.

The City of Iowa City cleans the mess, but the cost of cleaning it up is charged to the renter, City of Iowa City Resource Management Superintendent Jennifer Jordan said. Renters can call the city to come and clean up the unwanted materials, but some renters wait until the last minute, Jordan said.

“The minimum charge is $83. A giant pile that’s super messy with a bunch of stuff can be hundreds of dollars. So, we actually charge that back to whoever’s name is on the utility bill,” Jordan said.

City staff are tasked with cleaning up the mess, Jordan said.  She said there is no extra cost to the city for the clean-up.

Most of these messes happen on off-campus rental properties, according to Jordan, but University of Iowa and Iowa City employees work together. Jordan said that it is not just students making this mess, but anyone who is moving at this time.

“The city and the university have a bunch of programs in place that try to keep some of the usable materials out of the landfill,” Jordan said.

One of these programs, “Donate Don’t Dump,” organizes trucks set up around campus on the days those students are moving out, UI Office of Sustainability Program Manager Beth MacKenzie said.

“And this year, we essentially have the same program, but we partnered with the city, to expand beyond just campus and have drop off sites throughout the summer across different parts of the city,” MacKenzie said.

Some of these materials that are kept out of the landfill are canned food, usable clothes, and recyclable appliances.

“So, there’s lots of programs out there in the community that help try and keep some of that stuff out of the landfill and not be wasted,” Jordan said.

“Depending on the location we have between five and three days to turn over units. Most units are cleaned within the first day after a lease expires. If tenants leave the unit in poorer condition, that process can take longer,” Evans said.

“If the unit is left in clean condition, the owner would pay for touch-up cleaning. If the tenants make no attempts to clean, then that charge would be billed to the tenants,” Evans said.