After an up-and-down first season under center for the Hawkeyes, Petras is ready to take the stage as a now-experienced quarterback. 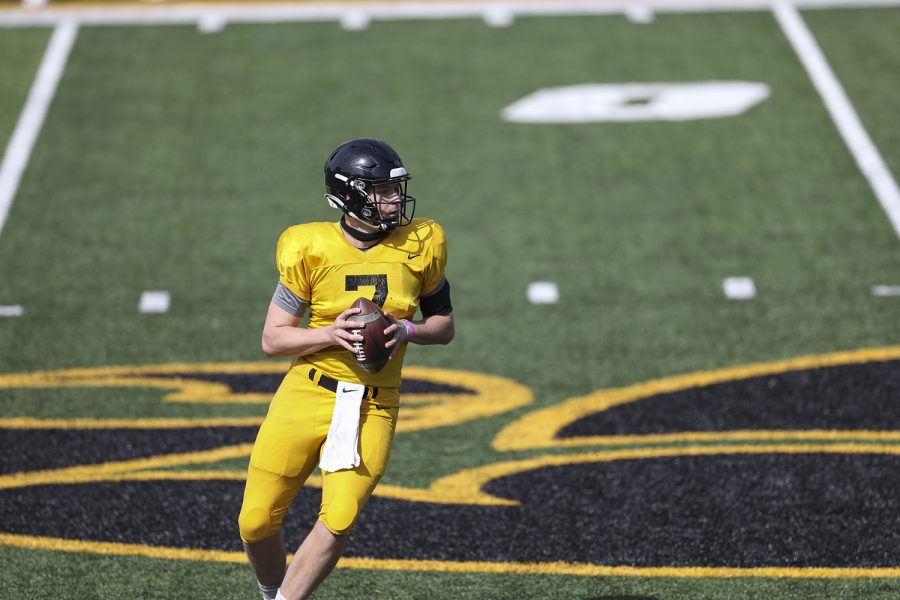 Katie Goodale for The Daily Iowan

As Hawkeye football approaches in September, quarterback Spencer Petras is gearing up for his second season starting under center.

At the same time, Iowa head coach Kirk Ferentz is looking for improvement from his now experienced quarterback.

Petras struggled in his first season taking snaps for the Hawkeyes, completing just 57.1 percent of his attempted passes — 11th out of 14 quarterbacks in the Big Ten. He also averaged only 6.4 yards per pass, ranking in the bottom three of the league.

But in 2020, the fresh-faced starter was thrown onto the field at Kinnick Stadium with minimal preparation, as the Hawkeyes canceled spring practice and much of the preseason because of COVID-19.

“Historically, these last 23 years, we’ve had a lot of success with first-year quarterbacks,” Ferentz said at Big Ten Media Days on July 23. “… I think the big difference with Spencer, taking over the first year prior versus those guys or anyone else since that time, is that Spencer wasn’t afforded the luxury of a spring practice or a normal preseason practice in August.”

Now, after going 6-2 in the 2020 season and having a full spring practice in 2021, the San Rafael, California, native is ready to face the spotlight once again for his junior season with the Hawkeyes.

“I’m definitely more confident and more comfortable because I’ve done it before,” Petras said at a press conference on July 14. “You know, last year, before the season, it’s kind of like ‘I’ve played football before, but not at the Big Ten level.’ So, I’m certainly more confident, more comfortable, because I know what it’s like to go out there and throw a touchdown.”

While Stanley was quieter, Tracy said, Petras has developed into a vocal leader on and off the field, encouraging his teammates to finish their reps and conditioning.

“[Petras will] also, you know, come up and talk to you, tell you what you need to get better at,” Tracy said. “But if you give him criticism, he’ll take it to heart. He’ll actually try and work on it. So, I think for me it’s been pretty good right now.”

Tracy has also noticed a discernible improvement in Petras during spring and summer practices, he said, especially with earning the respect of his teammates.

Iowa football’s depth chart, released on July 22, lists Petras as the first-string quarterback. Sophomore Alex Padilla took the second spot on the depth chart. Redshirt freshman Deuce Hogan and freshman Joey Labas are the other two quarterbacks on the roster.

“As a coach, we get to witness to how committed he is to not only him being a good football player, being totally ready, but how committed he is to helping his teammates and being team-oriented,” Ferentz said. So, I continue to be really impressed with him… we all feel really good, good about him, and have great confidence.”