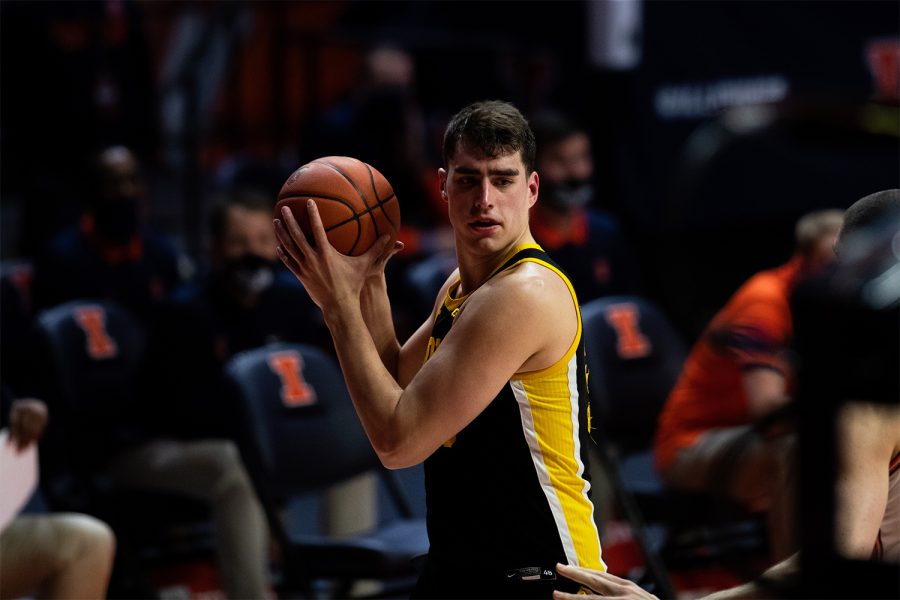 Joe Wieskamp and Luka Garza were mainstays in the Iowa men’s basketball team’s lineup during their time with the program. Garza, the reigning consensus national player of the year, is seeking to carry on his career as a professional after four seasons with the Hawkeyes. Wieskamp declared for the draft after last season — his junior year.

The draft is scheduled to start at 7 p.m. on Thursday and will air on both ABC and ESPN. All 60 picks of the two-round draft will be made at the Barclays Center in Brooklyn, New York, on Thursday night. Here is where Wieskamp and Garza are projected to be selected.

Player profile: Wieskamp started 97 games in his career with the Hawkeyes. The Muscatine, Iowa, native averaged 14.8 points and 6.6 rebounds per game last season, while shooting 49.1 percent from the field and 46.2 percent from 3-point range. Wieskamp was a second-team All-Big Ten selection last season.

At the combine, Wieskamp seemed to boost his draft stock with his 6-foot-11 measured wingspan and 42-inch max vertical, alongside his 26 points and 10 boards on 6-of-7 shooting from 3-point range in an exhibition game.

Where he is being projected:

The Ringer’s Kevin O’Connor: Second round, 46th overall pick to the Toronto Raptors.

What the experts are saying:

Boone: “Wieskamp tested well at the combine athletically and is coming off a career year at Iowa in which he made nearly half of his 158 3-point attempts. With his shooting ability it’d be silly to let him slip out of the first round.”

O’Connor: “The Raptors shoot a ton of 3s. Wieskamp is one of the best 3-point marksmen in the draft.”

Wasserman: “Wieskamp has emerged as a shooting specialist value pick who could go anywhere in the second round.”

The Athletic’s John Hollinger: “Wieskamp is a plus athlete with a rebound rate of a combo forward and solid rates of blocks and steals. However, his lateral quickness looks pretty suspect on tape… Offensively, he looked pretty good when he could play off of other people as a cutter or spacer, but his individual efforts with the ball often ended badly.”

Player profile: Garza became the Iowa men’s basketball program’s all-time leading scorer last season and owns the two top scoring seasons in program history. Garza is a two-time consensus All-American and two-time winner of the Big Ten Men’s Basketball Player of the Year award. As a senior, Garza was the consensus national player of the year, averaging 24.1 points and 8.7 rebounds per game, while shooting 55.3 percent from the field and 44 percent from 3-point range.

Garza’s lack of quickness and speed have been criticized ahead of the draft, as has his ability (or potential lack thereof) to defend at an NBA level. Garza had the worst no-step vertical at the combine and the slowest sprint time by .16 seconds.

Where he is being projected:

What the experts are saying:

O’Connor: “Why not? Garza dominated college basketball. But real concerns about his athleticism have bumped him to the second round. Maybe he could learn a thing or two about how to succeed in the NBA from Jonas Valanciunas… Skilled offensive big man who plays with contagious effort, but his athleticism must improve for him to survive defensively.”

Hollinger: “Look, I get the skepticism. Garza is slow as hell and there is a good chance he gets abused so badly in pick-and-roll that there is just no amount of offense he can provide to make up for it. But… what if we’re wrong? What if he’s at least quasi-passable on defense? Garza annihilates opponents on post-ups, shot 44 percent from 3 as a senior, and showed some development as a playmaker from the elbows.”