Fleming has 23 years of coaching experience in professional hockey. 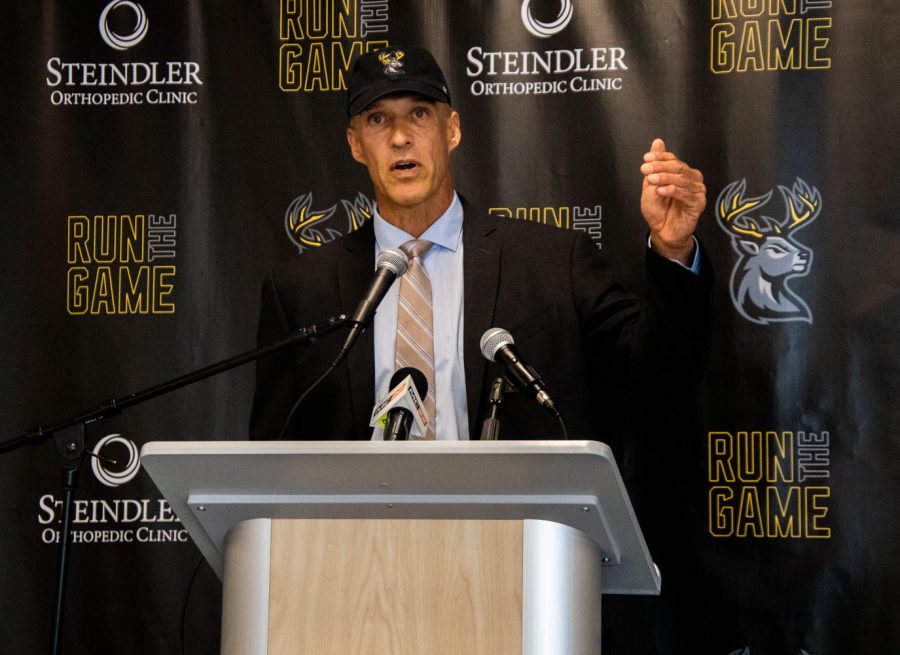 Newly named Iowa Heartlanders head coach Gerry Fleming talks about his plans for the upcoming season for the Heartlanders on Tuesday, July 27.

The Iowa Heartlanders announced Gerry Fleming as the team’s inaugural coach, it was announced at a press conference at Xtream Arena Tuesday.

The Heartlanders are Coralville’s first area ECHL team. The team is affiliated with the AHL Iowa Wild in Des Moines, and the NHL Minnesota Wild in Minneapolis.

“Gerry’s reputation as a strong developer of talent and a winner makes him the right man to lead the Heartlanders,” Iowa Heartlanders President and CEO Brian McKenna said. “Fans will immediately notice his passion and outgoing nature and know he will be a recognizable and friendly face in Coralville and Iowa City.”

When picking the first head coach of the Heartlanders, McKenna said, there were a number of priorities.

The Iowa Heartlanders wanted someone with a winning pedigree over the course of their career, as well as someone who embraced the development model with the Minnesota and Iowa Wild — a coach that is willing to bring players through the professional system.

With this also being the first team in the Iowa City/Coralville area, McKenna said, the Heartlanders also wanted someone who understood how important this team is going to be for the community.

“I’m happy to say here today that we’ve got somebody that checks all of those boxes,” McKenna said.

Fleming has seven years of experience on the ice as he played for the AHL’s Fredericton Canadiens from 1991-98. He also skated in 11 career NHL games with the Montreal Canadiens during that time.

Fleming has 23 seasons of coaching experience in professional hockey.

“Our main objective, obviously, is to put a winning team on the ice,” Fleming said. “And I’m not worried about that, I’m going to be frank and honest with you… getting the opportunity to set that bar and push that market forward every day, demanding the best of yourself and the best of your team, is what we’re going to do here.”

McKenna said the Heartlanders especially liked Fleming’s experience with a startup minor league team — from 2015-18, Fleming was the first head coach of the AHL Bakersfield Condors in Bakersfield, California.

“It helps in every aspect,” Fleming said of previous experience managing a startup team. “You understand some of the — and it’s all based on experience — you know, like some of the things that you maybe don’t see coming, and I’ve had the experience in dealing with it.”

The Heartlanders also announced the first professional hockey game at Xtream Arena — on Oct. 8, the AHL’s Iowa Wild will take on the Rockford IceHogs, the Chicago Blackhawks minor league team, in a preseason matchup.

“Our community couldn’t be more excited to usher in the era of the Heartlanders this October,” Luke Eustice, the director of the Iowa City Area Sports Commission, said in a release. “We look forward to welcoming the AHL to Coralville and with it, the Minnesota Wild and Chicago Blackhawks stars of tomorrow.”

The Heartlanders officially open the 2021-22 ECHL season on Oct. 22 against Kansas City at Xtream Arena.