For the second straight season, Scherff will be playing under a one-year contract for the Washington Football Team. 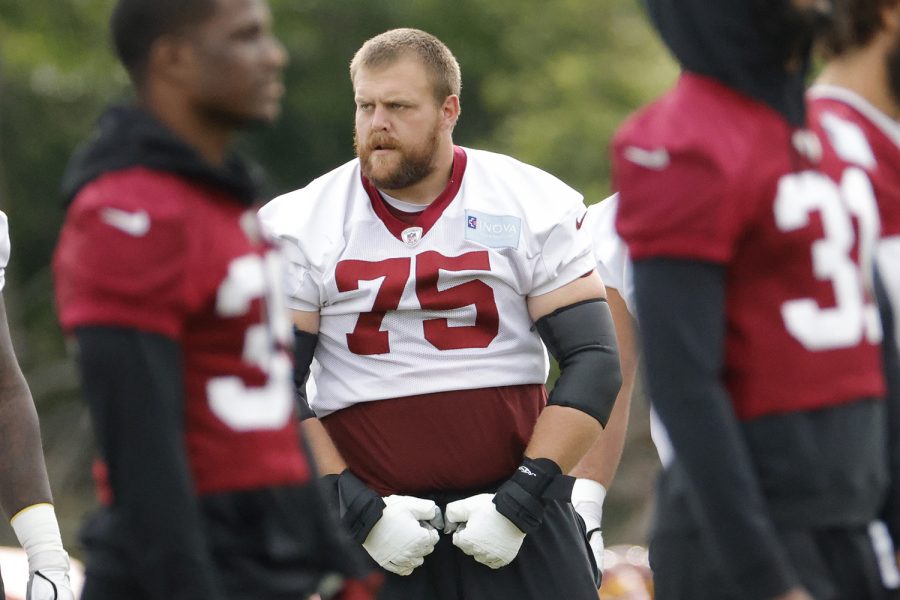 Former Iowa offensive lineman Brandon Scherff has lived up to his first-round potential since being the No. 5 overall pick in the 2015 NFL Draft by the Washington Football Team.

Scherff won the starting right guard job before the start of his rookie season in 2015-16 and has continued to hold that position in his six years at Washington, making the Pro Bowl four times. Despite missing the first three games of 2020-21, Scherff was also named to the AP NFL-All Pro first team after last season.

Pro Football Focus gave the Denison, Iowa, native the fourth highest rating among guards in 2020-21 — Scherff’s pass-blocking grade over the past three seasons is in the 97th percentile.

Heading into the 2021-22 season, Scherff will be playing on a one-year contract after the Washington Football Team applied the franchise tag to the offensive lineman for the second straight season. His contract for 2021-22 is worth $18.04 million — the most for any guard in the league.

The deadline for any NFL team to sign a long-term deal for a franchise-tagged player was July 15. In June, Scherff said he was hoping to work out a long-term deal with Washington, according to The Athletic.

But without a long-term deal earlier this month, 2021-22 could be Scherff’s last year in Washington. Bryan Manning of USA Today wrote that it is unlikely Washington will trade Scherff, because of the size of his contract.

However, it is possible Washington could sign Scherff to a long-term deal after 2021-22 as he’s one of 20 players on the team with an expiring contract. Scherff told The Athletic that he’s always wanted to stay in Washington where he’s been drafted.

In 2021-22, Scherff is expected to be Washington’s starting right guard, according to ESPN’s depth chart. Washington’s offensive line will look similar to the 2020-21 season with the exception of offensive tackle Morgan Moses, who was released in the offseason.

After Washington’s offensive line finished in the top-10 of the 2020-21 Pro Football Focus ratings, the publication has the line ranked 17th heading into the 2021-22 season.

Former Miami Dolphin and veteran quarterback Ryan Fitzpatrick signed a one-year deal with the Washington Football Team in March, and ESPN projects Fitzpatrick to be the starter ahead of second-string Taylor Heinicke. Heinicke finished the 2020-21 season as Washington’s starter after the team released Dwayne Haskins ahead of the regular season finale.

Antonio Gibson is projected to be Washington’s starting running back — he had 795 rushing yard in the 2020-21 season. Washington signed two wide receivers in the offseason — Curtis Samuel and Adam Humphries — who have a combined 27 touchdowns in the NFL.

After the 2020-21 season, Scherff will wait to see if Washington signs him to a new long-term contract.