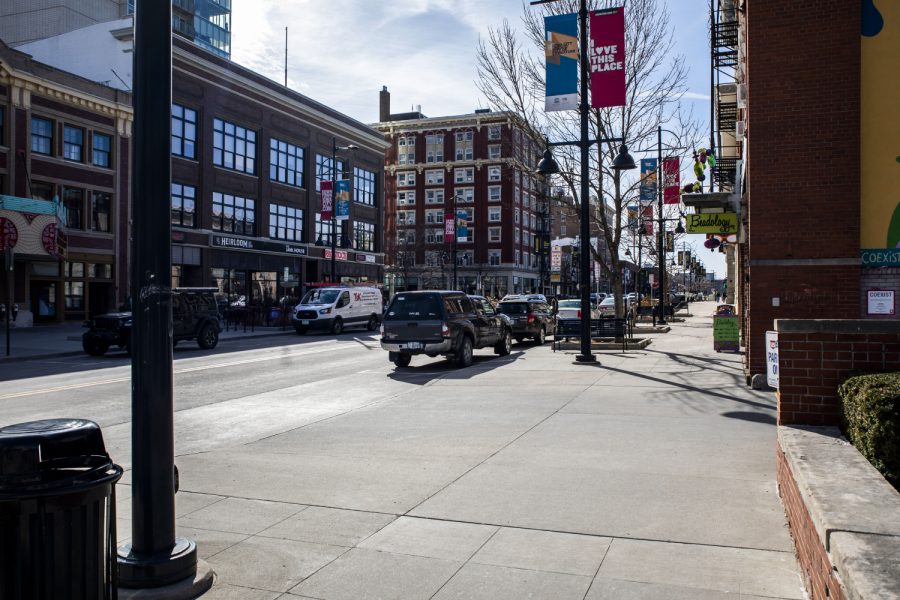 Looking west up Washington street on Thursday, March 18, 2021. Downtown is quite as students have their mid-terms.

Many downtown Iowa City businesses are housed in century-old buildings, according to Iowa City Night Mayor Joe Reilly, often making the bathroom facilities run down and off-putting to visitors.

Renovations would be difficult and costly, Reilly said, and some businesses may not be able to afford to make certain updates to their bathrooms. For that reason, he said, the downtown district is launching the Better Bathroom Campaign. This campaign’s goal is to renovate the public bathrooms of Iowa City businesses via award grants.

“This was a long time coming,” Reilly said. “This idea was kind of incited by this conference talking about hospitality and nightlife and one of the presentations talked about safe and inviting spaces in nightlife.”

Reilly said he got the idea for the Better Bathroom program from attending a conference about hospitality in the nightlife industry. He said people are often discouraged from frequenting a business that has poor facilities.

“When we thought of the idea, looking around just searching online, we found out no one has ever done a program like this ever,” Reilly said.

Reilly said the response from businesses he’s reached out to regarding his program has been overwhelmingly positive. He said one Iowa City bar owner told him that it doesn’t matter how good the service, or the food is; if the bathrooms are disgusting, that’s the only thing that will stick out in customers’ minds.

“We get hit on our bathrooms a lot. I mean, we keep them clean, but they’re really outdated so people tend to think that they are not clean just based off of the way they work,” Brittney Carver, the manager at Quinton’s Bar in downtown Iowa City, said. “It’s just something that we’ve always wanted to do, update the bathrooms, but it’s been kind of financially difficult especially after COVID. So, when we heard about this opportunity, we were really excited about it.”

The total budget of $25,000 comes from a tax levy on district property values. All awards are doled out based on need and determined by a committee of four judges, according to Reilly. Among the judges will be someone from the University of Iowa Rape Victim Advocacy Program.

The bathrooms will be judged based on five categories: lighting, cleanliness, efficiencies/automations/accessibility, visuals, durability, and privacy.

“I’m coming in from the Night-Time Mayor perspective, we’ve got somebody who’s coming in on the visual, aesthetic perspective,” Reilly said. “We have someone from the privacy, safety perspective, and someone coming from more of an overall code and design perspective.”

Grant applications for the Better Bathroom campaign close on July 26.

“We’re only putting in a partition in the men’s room, and hooks on the women’s room stall doors. Nothing too exciting,”Aaron Jennings, one of the owners of Mickey’s Irish Pub, wrote in an email to The Daily Iowan.

So far, there has only been one application submitted, Reilly said, but he is confident that there will be more before the deadline ends.

He added that he has been in contact with a dozen pubs, nightclubs, and bars who showed interest in the initiative.

“This program is about helping businesses know what they need, while also pushing them to elevate their bathroom spacing,” Reilly said.