‘This is your team now:’ Joe Toussaint taking over as Iowa’s starting point guard

Jordan Bohannon's transition to an off-the-ball role opens up the team's primary ball-handler spot for Toussaint, the speedy Bronx native. 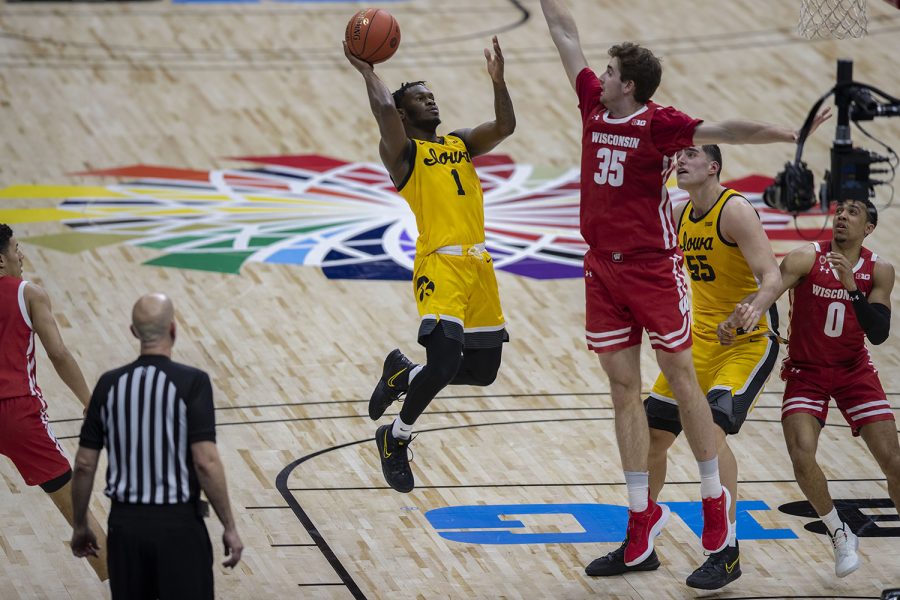 Iowa guard Joe Toussaint attempts to score during the Big Ten men's basketball tournament quarterfinals against Wisconsin on Friday, March 12, 2021 at Lucas Oil Stadium in Indianapolis. The Hawkeyes defeated the Badgers, 62-57. No. 3 Iowa will go on to play No. 2 Illinois tomorrow afternoon in the semifinals.

Joe Toussaint’s confusion upon hearing the news that his teammate Jordan Bohannon was returning to the Hawkeyes for a sixth year was quickly replaced with a sense of relief.

The Iowa men’s basketball team’s loss to Oregon in the second round of the NCAA Tournament was originally thought to be Bohannon’s final game as a Hawkeye, leaving Toussaint to take on the starting point guard role. That plan changed.

After Bohannon made his decision to return to the Hawkeyes public on April 26, the program’s all-time leader in games played, 3-pointers, and assists called Toussaint.

“I was in the middle of not really knowing my role,” Toussaint said. “Then he called me and told me like, ‘I’m here for you. This is your show. It’s your turn. I’m moving over to the two spot and I want to play with you.’”

With Bohannon transitioning into an off-the-ball role as the team’s starting “2” guard (a move made possible by CJ Fredrick’s decision to transfer) and Toussaint stepping into the starting role at the “1” this season, the pair will make up Iowa’s starting backcourt in 2021-22.

“I told him, ‘Listen Joe T, this is your team now,’” Bohannon said, recalling his phone conversation with Toussaint. “You’re gonna have the ball in your hands and be the point guard. You’re going to be making the important decisions throughout the season. I’m just gonna be there to shoot whatever open shots I can get from you.

“My ability to shoot the ball will create some space for Joe T to drive, and Joe T’s ability to drive will create a lot of havoc in the paint and a lot of guys will collapse. Open shots will be abundant on the perimeter if he continues to do what he’s been doing.”

Toussaint is the solidified starting point guard heading into his junior season, a different situation compared to the last time he was in coach Fran McCaffery’s starting five.

The 6-foot, 190-pound guard appeared in all 31 of Iowa’s games last season in a reserve role, averaging 3.7 points and 2.4 assists per game.

After seeing double-digit minutes regularly throughout the start of last season, Toussaint went six of eight games in February playing fewer than 10 minutes in response to his inconsistent play, which Fran McCaffery often attributed to trying to play too fast.

Toussaint’s speed and quickness may be his greatest assets on the court — when he controls them. They are why his roommate Patrick McCaffery called Toussaint a defensive weapon who can get his hands into passing lanes and then lead the Hawkeyes in the fast break.

“He’s working on his pace and how he can control his speed,” forward Patrick McCaffery said. “And I think that’s something that’s going to be really dangerous once he’s able to really get a hold on this. He’s got a gear nobody in our league has.”

A standout seven-assist game against Ohio State at the end of last regular season was the start of a strong stretch from Toussaint that saw him back in the rotation regularly.

While Toussaint turned his play around in-season, he had to wait until his sophomore campaign ended to take care of a lingering issue.

Toussaint thought he had a severe ankle sprain last season. But further evaluation revealed it was actually a bone spur and an accessory bone in his left ankle. He had a procedure to ease his pain a couple weeks after the season ended.

“I played through it and didn’t tell anybody,” Toussaint said. “That’s just not who I am. I just didn’t want to share my business.”

While still not back to feeling 100 percent healthy, Toussaint said he feels noticeably more comfortable on the court during summer workouts and can balance himself and move around more easily.

Toussaint said he never thought of transferring last season, even when he was hardly seeing any minutes of game action. Instead, we wanted to learn and prepare himself for when he’d be back in the starting lineup.

Well, that time has arrived.

“When I step on the floor, I think I’m the best player on the court,” Toussaint said. “That’s just how I play and the mentality I play with. If you lace up in front of me, you’re going to have to show me that you’re better than me. I trust my work. I work hard every day on my jump shot, my handling, my passing and my defensive skills. My work will be shown this year.”