After an injury that sidelined him for half of the 2020-21 season, James Daniels is in his final year of his rookie contract in 2021-22. 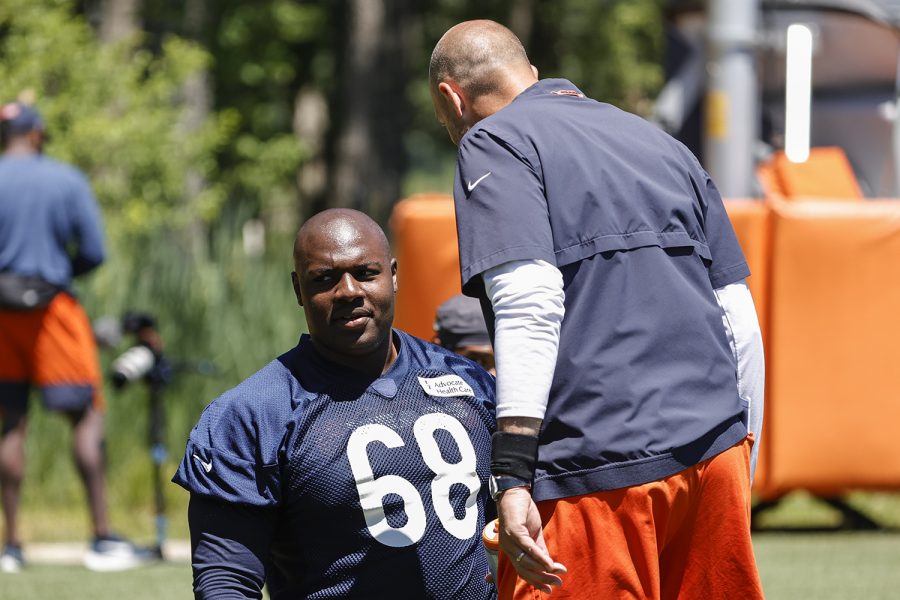 Former Hawkeye and current Chicago Bears James Daniels was one of seven Iowa offensive linemen on an NFL 53-man roster ahead during the 2020-21 season.

Daniels played at Iowa from 2015-17, starting 24 games in his college career, primarily at center. The former Hawkeye was one of four true freshmen in 2015 to see playing time.

After his junior season with the Hawkeyes in 2017, Daniels was picked in the second round of the 2018 NFL Draft — 39th overall — to the Chicago Bears.

Daniels made an immediate impact on the Bears in his rookie season in the special teams unit. Starting in Week 4 of the 2018-19 season, Daniels saw playing time on offense. In Week 8, he made his first career NFL start at left guard. Daniels became the starting left guard for the rest of the season, including the Wild Card playoff round.

For his performance in 2018-19, Daniels was named to the ESPN All-Rookie team.

The Warren, Ohio, native started the season at center for nine games in 2019-20 but switched back to left guard in Week 10 with a struggling Bears offense.

Daniels continued starting at left guard for the 2020-21 season until he tore a pectoral muscle to end his season. With Daniels out for the season, the Bears had to make offensive line adjustments and didn’t achieve over 100 rushing yards until Week 12.

Daniels is projected to return to the lineup in 2021-22 as ESPN has him listed as the starting left guard. However, Adam Jahns of The Athletic put together a different offensive line starting lineup for Chicago.

In that scenario, Jahns put Daniels as the starting right guard if rookie Bears tackle Teven Jenkins has a strong training camp and preseason. But Jahns also wrote regardless of Daniels’ return to the field, Jahns doesn’t see him at left guard.

Instead, Jahns sees Cody Whitehair starting at left guard for the Bears. Whitehair was the starting center during Daniels’ rookie season in 2018-19. Whitehair and Daniels have swapped positions multiple times in the past three years.

In 2020-21, Whitehair started the first seven games of the season at center before missing two games due to a calf injury. When Whitehair returned, he took over in Daniels’ absence at left guard on the offensive line.

Tackle German Ifedi is also an option at the guard positions as he heads into his second season with the Bears and sixth in the NFL. Guard Alex Bars will start his third NFL season along with center Sam Mustipher, creating a position battle for Chicago. In 2020-21, those three players had a combined 31 starts for the Bears.