After being canceled last year because of COVID-19, the Downtown Iowa City Block Party is set to return July 24. 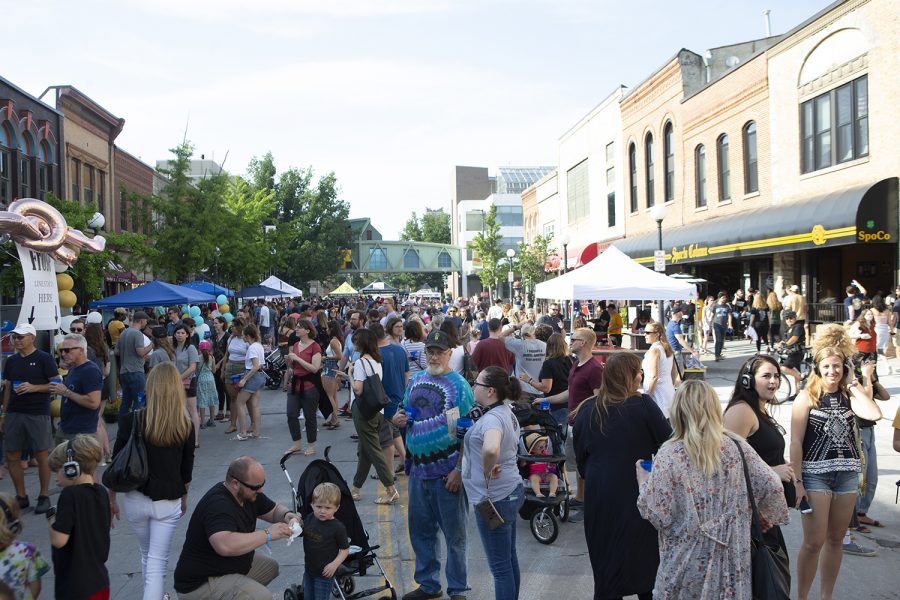 After last year’s COVID-19 related cancellation, the party of the summer is back and bigger than ever. The Downtown Iowa City Block Party is returning July 24, featuring a projected 45,000 attendees

Downtown District Director of Operations Betsy Potter said the block party, previously held in June, was pushed back a month this year in hopes Johnson County would see higher vaccination rates by July.

According to the U.S. COVID-19 Risk and Vaccine Tracker, Johnson County’s population is 58 percent fully vaccinated, higher than it was a month prior.

“[The block party] invites the community to have a unique experience,” Potter said. “That’s really why the purpose behind it is to also make sure that it’s really family friendly, and that it speaks to many different audiences.”

The block party is expected to attract an estimated 45,000 attendees, and the Downtown District is making accommodations for the large crowd, Potter said. The usual seven blocks of downtown will be extended to 14 blocks to allow for better social distancing, and certain events that require close contact have been taken out entirely.

Studio 13’s drag show is one of the attractions for the block party, along with a chess tournament and dueling pianos, among other things.

“We are proud that our staff is fully vaccinated at Studio 13 and we will continue to offer free masks for any customer who has not been able to complete their vaccination yet,” Studio 13 owner Jason Zeman said.

Potter said with the variety of activities to do at the block party, including the silent disco and line dancing, there is something for everyone to enjoy — including a break in routine for frequent visitors of the downtown district.

The block party brings a large crowd of people to the downtown district, but only a few businesses downtown are officially associated with the block party.

Dumpling Darling is a restaurant in the downtown district, but the staff is not planning on running the restaurant differently during the block party. Henry Tran, a manager at Dumpling Darling, said while they hope to see an increase of foot traffic, their COVID-19 precautions will not be changing.

The Downtown Iowa City Block Party started in 2017 as a way to attract people to the downtown district and has since become one of the city’s most anticipated events.

“The block party is a great way to highlight all of the amazing things downtown Iowa City has to offer,” Zeman said. “It offers a sense of shared community and fun for all ages with multiple events throughout the afternoon and evening. The Iowa City Downtown District is a strong partner for our downtown businesses and I’m thankful for all of their efforts to help us recover from a challenging past year.”