In the 2020-21 season, the Hawkeyes' defense ranked last in Division I NCAA Women's Basketball, allowing 80.3 points per game. 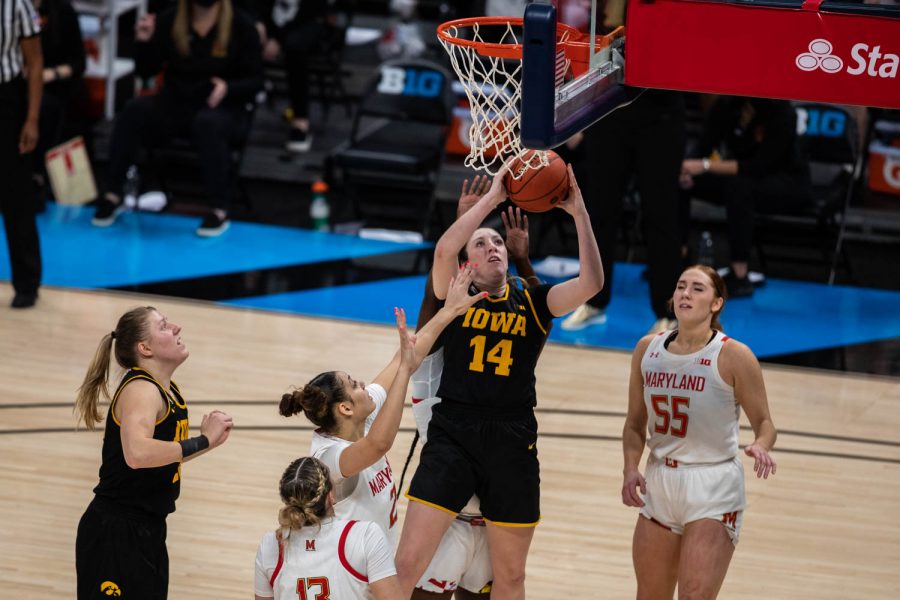 Iowa’s McKenna Warnock (14) takes a shot during the championship game of the Big Ten women’s basketball tournament. Iowa, ranked No. 6, took on No. 1 seeded Maryland in Indianapolis at the Bankers Life Fieldhouse Saturday afternoon. Maryland beat Iowa, 104-84, securing their spot as the 2021 Big Ten Champions.

At the end of practice at the Carver-Hawkeye Arena practice gym on Thursday morning, Iowa women’s basketball head coach Lisa Bluder brought her team into a huddle.

“We want people to talk about us as a top-15, top-10 team in the country,” head coach Lisa Bluder said at a press conference with reporters following practice Tuesday. “Why not? That’s what people work really, really hard for. So, don’t shy away from it, embrace it, and we talk about it. We know the target is going to be on our back a little bit. And we’re still kind of young, but there’s so much optimism surrounding this team.”

In the midst of Iowa’s 2020-21 season, the Hawkeyes ranked 336th out of 336 NCAA Division I Women’s Basketball teams in scoring defense — allowing an average of 80.3 points per game.

In the Hawkeyes’ last game in the 2020-21 season, a Sweet 16 matchup against UConn, Iowa allowed 94 points to the Huskies

Throughout 2020-21, Iowa’s offensive scoring ranked second in the country, behind only Big Ten foe Maryland, as the Hawkeyes put in 86.1 points per game.

“We definitely know our offense is No. 1, No. 2 in the nation,” junior forward McKenna Warnock said. “With defense, we need to get that there. And then I think we’ll be able to do anything we want to, as long as we buckle down on the defensive end.”

The Hawkeyes returned to offseason summer practices June 14, and most of their time on the court consists of defensive practice.

“We’ve been doing defense almost every time we practice, it’s like the majority of our practices,” sophomore guard Kylie Feuerbach said. “It’s something very emphasized, and very important for this team for sure. Everyone’s on board with it, everyone’s been really competitive and pushing each other.”

Warnock said the goal for the Hawkeyes is to allow an average of just 60 points per game in the 2021-22 season, which would put the Hawkeyes within the top-100 in scoring defense.

As Iowa irons out the defensive side of the ball, the Hawkeye coaches are implementing new defensive schemes to keep opponents — nonconference and Big Ten alike —  on their toes.