Around the Big Ten: Women’s Basketball

With many of its top teams returning four or five starters each, the Big Ten will be at the forefront of collegiate women’s basketball in 2021-22. 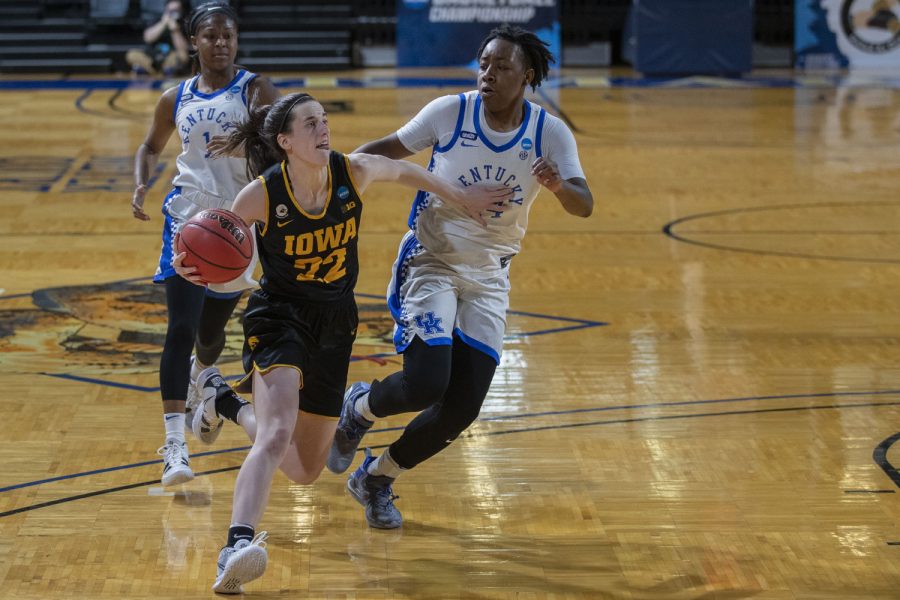 Iowa guard Caitlin Clark dribbles toward the basket during the second round of the NCAA women's basketball championship against No. 4 Kentucky on Tuesday, March 23, 2021 at the Bill Greehey Arena at Saint Mary's University in San Antonio, Texas. The Hawkeyes defeated the Wildcats, 86-72.

The 2021 offseason has been one of movement for collegiate women’s basketball.

Legendary Baylor women’s basketball head coach Kim Mulkey swapped the green and gold of the Bears for the purple and gold of Louisiana State University, while players took advantage of the NCAA’s new one-time transfer rule — allowing student-athletes to transfer schools without having to sit out a season.

Despite the moves, Big Ten women’s basketball remained stable as many of the 2020-21 season’s contenders returned most of its roster, looking for deep postseason runs.

Sophomore Caitlin Clark, the 2020-21 Big Ten Freshman of the Year, will be looking to build off a record-breaking season with the Hawkeyes. Monika Czinano, after leading NCAA Division I Women’s Basketball with a 66.84 percent shooting percentage, will take advantage of her dominance in the paint in her senior season.

The Hawkeyes are also adding Iowa State sophomore transfer Kylie Feuerbach to the mix, who averaged 5.5 points and 3.1 rebounds per game as a freshman with the Cyclones.

As the reigning conference regular season and tournament champions, Maryland is returning most of its core for the 2021-22 season. The Terrapins generated the best offense in the nation in 2020-21 averaging 90.8 points per game.

Terrapin guard Diamond Miller, the Most Outstanding Player at the 2021 Big Ten Tournament, will return for her junior season. Miller shot 50.6 percent from the field in 2020-21.

Indiana will also be returning all five starters that led the Hoosiers to their first NCAA Tournament Elite Eight appearance in program history. The Hoosiers have a stout defense, allowing an average of 59.6 points per game in the 2020-21 season.

Michigan will also bring back the sum of its parts, including 2021 Big Ten Player of the Year Naz Hillmon. Hillmon averaged just under 24 points per game in the 2020-21 season.

In the 2021-22 season, Ohio State will be eligible for postseason play after the Buckeyes suffered a self-imposed postseason ban in 2020-21 because of NCAA recruiting violations.

The Buckeyes lost Dorka Juhász to the University of Connecticut but will bring back sophomore Madison Greene — who averaged 7.1 points at the point guard spot as a freshman — and senior Braxtin Miller.

Michigan State earned a No. 10 seed to the NCAA Tournament in 2020-21 but was knocked out in the first round by Iowa State.

The Spartans will return senior Nia Clouden, a first-team All-Big Ten selection. Clouden started all 24 games for Michigan State, leading the team in scoring with 18.7 points per game.