After winning a Big Ten regular season title in 2020-21, Kaji will take advantage of the NCAA’s extra year of eligibility for a sixth season in 2021-22. 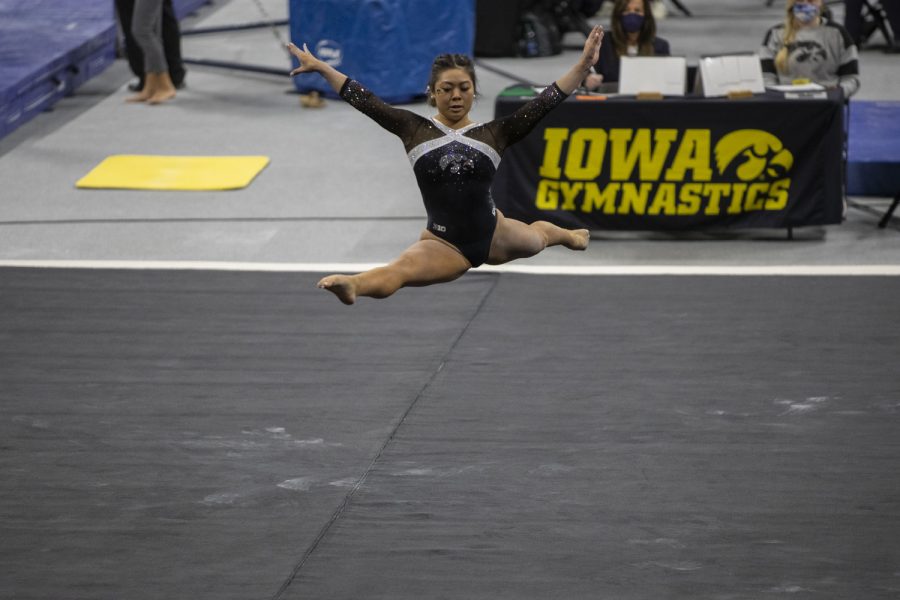 Iowa's Clair Kaji performs her floor routine during a women's gymnastics meet between Iowa, Minnesota, and Maryland on Saturday, Feb. 13, 2021 at Carver Hawkeye Arena. The Hawkeyes came in second with a score of 196.775 after the Gophers won with 196.975 and Maryland lost with 195.350. Kaji received a score of 9.900.

Clair Kaji had no regrets after completing her fifth season on the Iowa women’s gymnastics team.

Yet, she thought she could contribute more to the program.

“So, it went to, ‘Could I contribute physically?’” Kaji said. “Yes, I can still contribute physically, and I want to do that. I trust my team. I have an incredibly talented team, and if I can push someone to be better and push me out of the lineup, so be it because that’s how we’re all going to get to the top.”

After her sophomore season was cut short in 2017-18 because of a torn Achilles, Kaji returned for a fifth season in 2020-21. Now, as the NCAA gave all 2020-21 student-athletes another year of eligibility because of COVID-19, Kaji had the option to return again to the Haweyes.

So, Kaji decided to compete for one final season with women’s gymnastics at Carver-Hawkeye Arena in the 2021-22 season — her sixth at Iowa, a program that just had one of its best seasons in its history.

After losing their first meet — an exhibition against Minnesota — the Hawkeyes won seven straight dual competitions, including the Big Ten’s Big Five meet, on their way to the program’s first-ever Big Ten regular season title.

At the 2021 Big Ten Women’s Gymnastics Championships, the Hawkeyes tied for third with a score of 196.625. At the conference meet, Kaji was selected to the 2021 All-Big Ten Championships team after finishing runner-up on bars.

Throughout the 2020-21 season, Kaji competed on bars, beam, and floor for the Iowa rotation. She posted a 9.900 or higher eight times on floor, five on beam, and three on bars.

After the 2020-21 season, Kaji earned first-team All-Big Ten honors — her third time making an All-Big Ten team. She was also the Big Ten specialist of the week three times, on Jan. 25, Feb. 1, and March 8.

“I think this past season was the best for me personally,” Kaji said. “And what works for me is just kind of letting go of the of the pressure of focusing a lot on the team and just trusting myself and trusting my gymnastics.”

In her freshman season, she tied for first on the beam at the 2017 NCAA Regionals in Champaign, Illinois, with a score of 9.950. Kaji notched an individual spot at the NCAA championships, finishing in 17th with a 9.8650 score.

After recovering from her Achilles injury in 2018, Kaji earned first-team All-Big Ten in her junior season in 2018-19 and garnered academic All-Big Ten honors after the shorted 2020 season.

The Vancouver, Canada, native ranks second in program history on beam with a 9.950 score and sixth on bars with a 9.925.

“My team for sure is my family not blood because I could not imagine my life without these people,” Kaji said. “And I think these people will be the best people I will ever know in my life. So, yes I have absolutely loved it here.”