After key departures from the men’s basketball program in 2021-22, sophomore forwards Josh Ogundele and Kris Murray are looking to fill the gap. 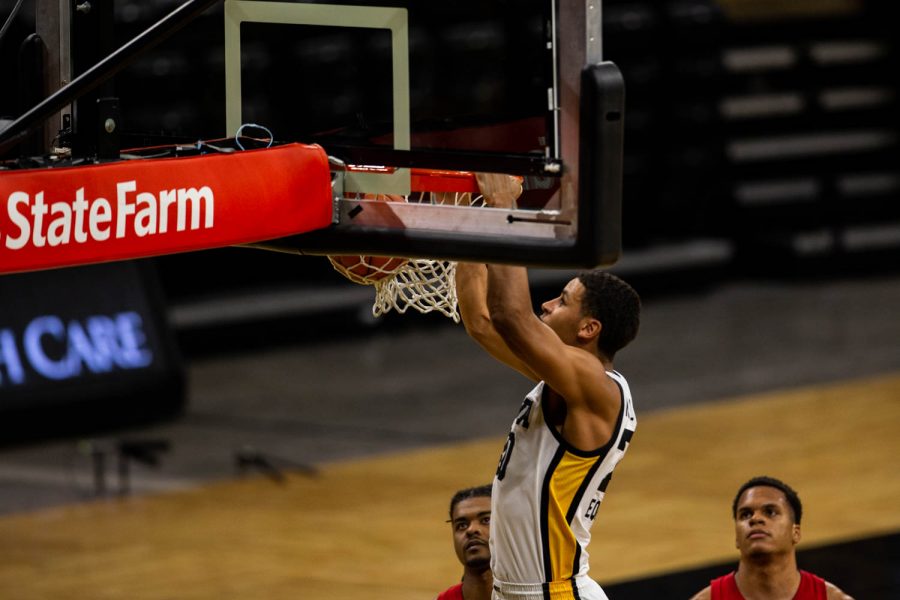 Iowa Forward Kris Murray (20) dunks the ball during an Iowa men’s basketball game against Nebraska on Thursday, March 4, 2021 at Carver-Hawkeye arena. The Hawks beat the Cornhuskers, 102-64.

“It’s been a very big learning curve,” Ogundele said at a press conference Tuesday. “Obviously, I wasn’t here to train [last summer], so it’s very different. But this year, because I have workouts almost every day, it’s been very good to get in better shape.”

Ogundele lived in London throughout the summer of 2020 as the United Kingdom closed its borders because of COVID-19. So, he was not able to join his teammates — who arrived on campus in June — until August.

For Ogundele, living in London put him behind in strength and conditioning to become a Big Ten men’s basketball player. COVID-19 lockdown protocols in London only permitted people to go outside for exercise once per day, and all gyms were closed.

Ogundele only played in eight contests throughout the 2020-21 season, averaging 2.1 minutes per game.

“Last year, for instance, I was very mad at myself because I could’ve made a bigger impact than I did, especially with [former Hawkeye] Jack Nunge being out,” Ogundele said. “But because my conditioning wasn’t there, I couldn’t do anything… I know that I have what it takes to play in the Big Ten, it’s just my conditioning that was the problem.”

But throughout practice last season, Ogundele took notes on former Hawkeye Luka Garza, the 2020-21 consensus National Player of the Year.

Now, Garza left the Hawkeye program to pursue a career in the NBA, and Ogundele is hoping to make a bigger impact on the court in his sophomore season.

The 6-foot-11 center upped his conditioning throughout the summer and started a mostly carb-free diet to lose weight before the 2021-22 basketball season.

“If I keep working this year, I hope if I get in the best shape I could, I could start and get big minutes,” Ogundele said. “I feel like I’m a person that the team can rely on this year, especially as I’m improving more and more, my game is getting expanded.”

Wieskamp declared for the 2021 NBA Draft and participated in the NBA Combine this past week, but has until July 7 to decide if he’s coming back to the Hawkeyes for his senior season.

“It’ll be more aggressive offensively,” Murray said. “That’ll be a big part of the role I’m going to have this year as a play-maker as well, which will be big. Defensively, playing defense gets you on the court, so I’m looking to do that as well.”

Overall, the Cedar Rapids, Iowa, native  is looking to become a versatile piece for the Hawkeyes.

“I just want to complete my game, mostly,” Murray said. “My play-making ability, my ball handling, I’ve worked a lot on different moves to get to the basket, setting up players, trying to get my shot more consistent… so I think that’s the biggest thing this year, especially losing the people that we did.”