Extreme weather patterns give a glimpse into the future of climate change in Iowa. This will have detrimental consequences for the global food economy. 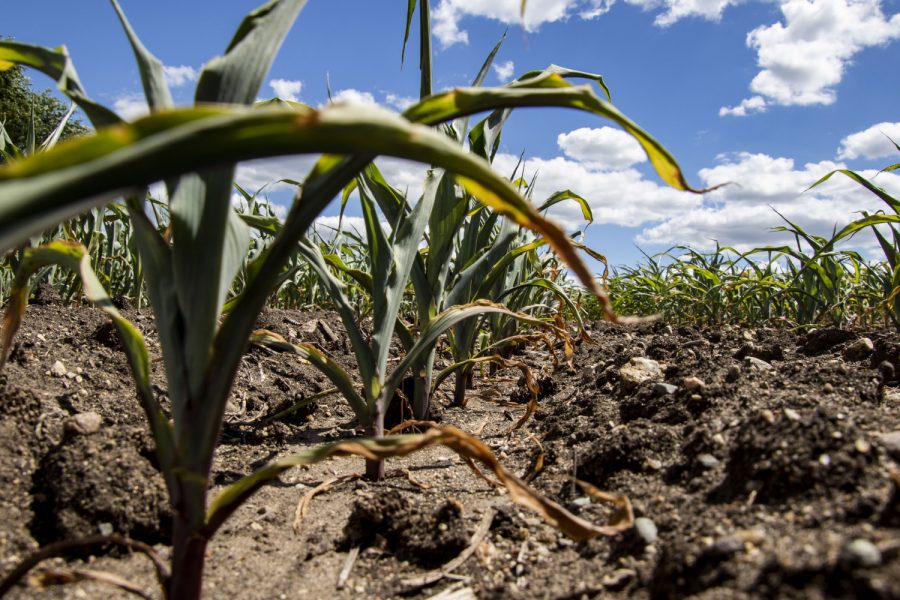 Corn leaves turning brown due to lack of rain on Monday, June, 21, 2021. A field planted with corn start showing the effects of lack of rain fall. The leaves are turning brown, and the stalks are short.(Jeff Sigmund/Daily Iowan)

Whether or not you are a fan of the hot temperatures in Iowa City recently, we can all thank the culprit behind heat waves hitting the midwest: climate change.

Not even a week into June, the midwest experienced a major heatwave. On average, daily high temperatures for June this year increased from 78 degrees to 84 degrees Fahrenheit. These record-high temperatures are abnormal for this time of year in June, forecasting a very hot rest of the summer.

June is not the only abnormal month of weather in Iowa City this year. Throughout February, frigid cold temperatures set numerous records and incurred Iowa City schools $170k in extra gas cost. Many students also recall struggling to walk to class amid blizzards in late March, and wind advisories in April.

The National Climate Assessment gives a dim outlook on the future of agriculture in the Midwest. According to the assessment, rising temperatures and extreme heat are expected to play a role in disrupting agricultural productivity in the U.S. This will threaten livelihoods, sustainable food security, and price stability.

The world population is expected to grow to over 9 billion by 2050. To meet the global food demands, agriculture production must increase by 60 to 70 percent from its current rate. With this rapid increase of demand, the question remains — where is it going to come from?

A large amount of global agriculture production comes from the Midwest for varying factors dealing with weather seasons for crops, sustainable economies to support production, wide areas of land for agriculture, and a strong source of dedication from farmers. For example, Iowa is responsible for an abundance of global corn and soybean production. It’s unimaginable to consider feeding the world without the midwest as a primary outlet.

The inevitable force of climate change will have devastating effects on everyone around the globe.

Even though an issue like climate change is far bigger than any single person, or city, we as a community need to do our part. For the sake of globe food production, we need to consider how our choices now will affect our future.

To much disappointment, the University of Iowa has done far too little in becoming a climate-conscious community. Theuniversity is a contributor to greenhouse gas emissions that leads to global temperature increases, as its buildings partially rely on coal and gas.

As Iowans and global citizens, we need to consider our effects on the future of this planet. This includes demanding the university better transitions to renewable energy sources, and instituting more climate friendly initiatives.

We also need to consider our effects on an individual level. Consider how your diet plays into the overall emissions destroying the planet’s ozone layer. Do you conserve water at home and limit your reliance on gas-fueled transportation? It’s OK, no one’s perfect. But there are easy ways to better ourselves and the planet.

Extreme weather patterns such as the record high temperatures in Iowa City prove that the consequences of climate change are not a future threat – it’s our current reality. The future of global food production depends on the choices we make now. Let’s do more to support the sustainable future of our city, state, region, and planet.