Salih’s term began in 2018 and will end in 2022. She said she was relieved to hear Harmsen was planning to run for council. 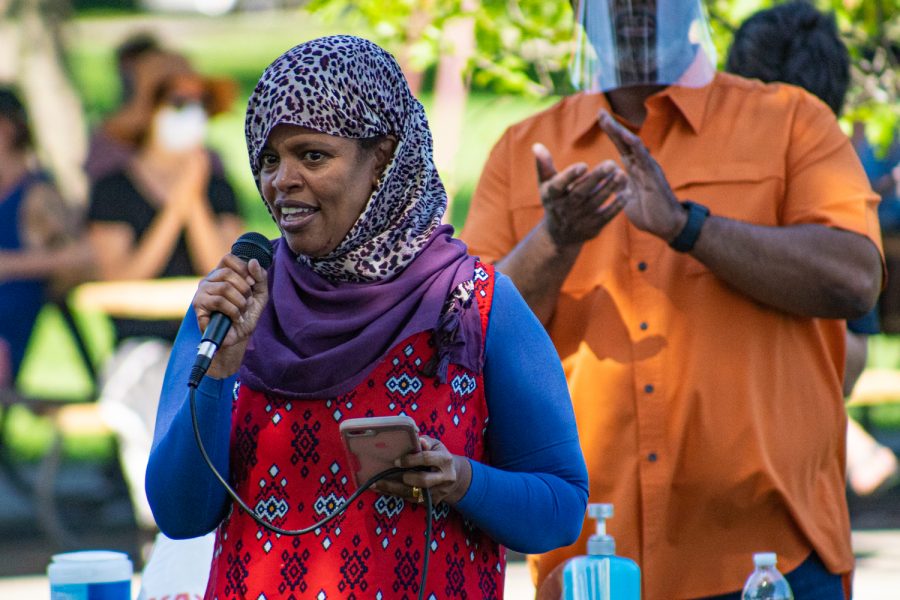 Mayor Pro Tem and At-Large Councilor Mazahir Salih announced she will not seek reelection on the Iowa City City Council and endorsed Shawn Harmsen for City Council at an event Wednesday night.

Salih began her first term in January 2018, which will end Jan. 2, 2022. Salih was offered a job in the spring at the Center for Worker Justice, she said.

“While I have loved serving this wonderful community, I have decided to begin a new chapter,” Salih said.

Harmsen, a communications studies professor at Coe College, announced he will run for the District B seat in the Nov. 2 Iowa City City Council election, which is being vacated by councilor Susan Mims.

As previously reported by The Daily Iowan, Jason Glass, a University of Iowa instructor and Vice Chair of Iowa City Human Rights Commission, will also run for City Council. Glass said he would consider running for the District B seat, but plans to run At-Large.

Harmsen was Salih’s campaign manager when she was running for council. Salih said Harmsen is an advocate for women and people of color. When she found out he was running, she said it was a huge relief for her.

“He is the perfect person to continue our work on the council and to make this a more just and inclusive community,” Salih said.

Harmsen grew up in rural Clinton County and attended Wartburg College, where he received his bachelor’s degree. He then earned his masters at the University of Northern Iowa. For more than a decade he worked as a broadcast journalist, and then went on to receive his doctorate degree from the University of Iowa.

Harmsen moved to Iowa City in 2010. He said he is running because he loves Iowa City and the passion and social justice in the town.

“Coming together, forming friendships, and bonds of community is what work together to make our corner of the world a better place and more equitable, for everyone, and where more people get their voices heard, that’s why I am running,” Harmsen said.

He said Salih is a powerful leader who will leave behind huge shoes to fill, and that no one can replace her presence on the council.

“But, I can do my best to continue enacting our shared vision for a community that lives up to its potential for economic, racial, and social justice,” Harmsen said.