Ali Hval, UI Alum and IC local completed a new mural for Studio 13’s storefront this past week. This mural comes just in time for Pride month, and demonstrates pride itself by utilizing the six colors of the rainbow flag. 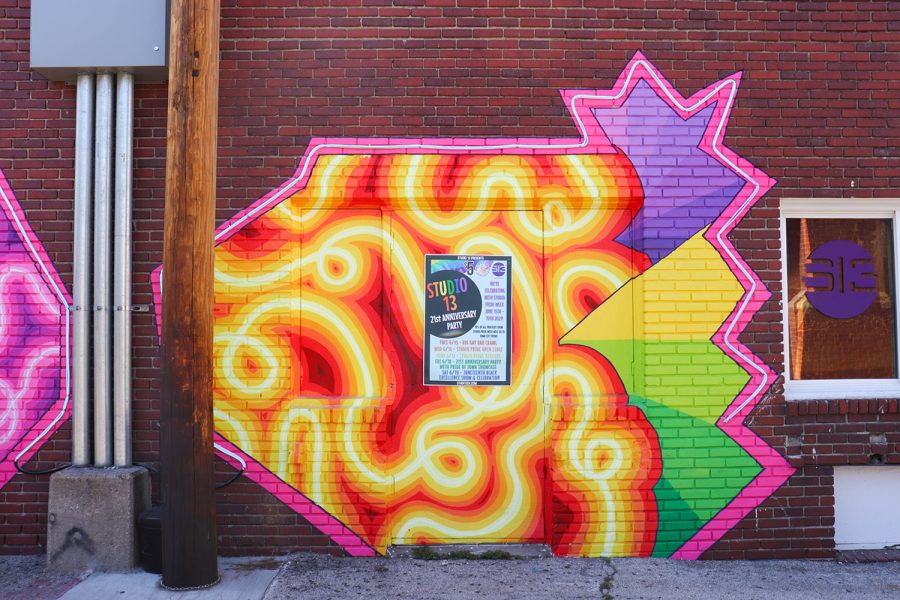 The mural comes just in time for pride month and, according to Hval, the mural was a blast to make. The process, including design time and painting, took approximately four weeks. Hval stated that this was slightly longer than usual because of how rainy it was around the time she was painting. She also described her creative method for murals as a multi-stepped process.

Hval said she begins by sketching out a design on a piece of paper. After brainstorming, she gets the dimensions and features of a particular site, including windows and doors. Next, Hval talks with her client about what they’re envisioning for the project.

“For Studio 13, the owner Jason Zimann gave me total freedom, which was pretty nice and very rare,” Hval said.

Hval spent one to two weeks creating the design in her head and took a couple of hours to physically sketch out. This first part of the Studio 13 mural was relatively easy, Hval said. The real challenge, she added, came with the process of painting the wall.

“The surface of the wall was very challenging,” she said. “There were multiple different surfaces like brick with deep grout lines — I had to get my brush deep in those grout lines. I also had corrugated steel, which is tricky to paint. When you step away, it’s going to look more wavy. There was also a change in the surface overall, the area with the garage door is pushed back and the brick is pushed forward. What I had to do was step back a lot when I was painting this mural.”

In addition to painting murals, Hval also creates interdisciplinary work that combines fabric, ceramic, painting, and sculpture. She uses decorative, “blingy,” and shiny materials along with metallic pigments for these pieces and pulls her inspiration from jewelry and current fast fashion trends. Hval said that her overall goal regarding art would be to create murals that act as a backdrop for these fabric and ceramic pieces.

Ultimately, Hval hopes that her work on the Studio 13 mural, and her other murals, will open people’s eyes to the importance of public art.

“I hope the people who see it gain an appreciation for public art and recognize how much it can enhance a space,” Hval said. “In terms of Studio 13, this was the first time I’ve ever painted a mural specifically for a business and it really transformed the front of the business and gave them a whole new look. I think once people can recognize that, hopefully they’re going to be more willing to pursue public art projects and integrate that into their community.”