All four of Iowa field hockey’s seniors decided to use their additional year of eligibility to play a final season in 2021-22. 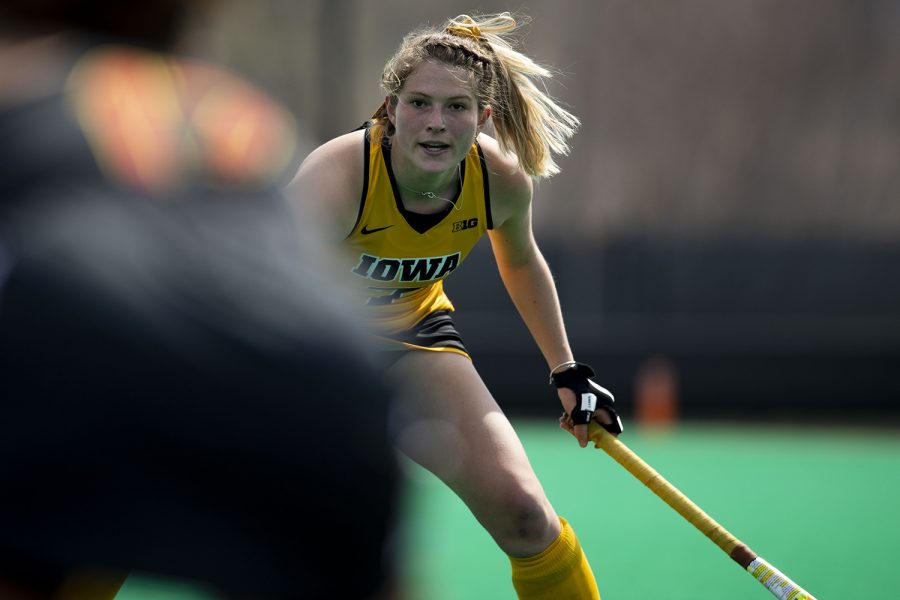 Iowa midfielder Ellie Holley waits for the ball during a field hockey game against Maryland on Sunday, April 4, 2021.

The Iowa field hockey team made a run to the Final Four of the Division I NCAA Field Hockey Tournament in an unconventional 2020-21 spring season and will have their veteran Hawkeyes from that accomplished team coming back for another season this fall.

In their first Final Four appearance since 2008, the Hawkeyes lost to top-seeded and eventual champion North Carolina, 3-0.  Overall, the 2020-21 Hawkeyes went 12-5 throughout the season.

But Iowa’s four seniors — midfielders Ellie Holley and Nikki Freeman, forward Maddy Murphy, and defender Emily Deuell — made the decision to return for the 2021-22 fall season, rounding out a full Hawkeye roster.

The NCAA announced in October that all 2020-21 collegiate athletes will receive an extra year of eligibility because of the effect COVID-19 had on student-athletes’ seasons.

Murphy, a rising fifth-year senior, said she is excited to have another opportunity with the same Hawkeye group.

“We’re so lucky to have this final season together,” she said. “We’ve talked about it a lot and we want to make the most out of this upcoming season. After how last season ended this spring, everyone is super motivated and ready to work hard.”

Three of the four returning Iowa seniors started for the Hawkeyes in 2020-21.

Holley finished with three goals and seven assists in the season as she was involved in almost every Iowa attack. Murphy repeated as the Hawkeyes’ top goal scorer last season, finishing with eight goals and two assists in 2020-21. Freeman led the Hawkeyes as a team captain, appearing in all 17 contests for Iowa at midfield. She recorded one goal on seven shots.

Nijziel anchored the Iowa defense last season as she was named the 2020-21 Big Ten Field Hockey Player of the Year and Defensive Player of the Year — marking the first time in program history an Iowa student-athlete won both awards in the same season.

The 2020-21 Hawkeye squad also housed 21 student athletes — a smaller roster than typical Division I field hockey teams, which carry an average of 23 players.

“Having a smaller team helps us to bond and build better relationships together,” Murphy said. “I think that one of the strengths of the Hawkeyes is our friendship and comradery on and off the field.”

After a deep run in the NCAA Tournament, the Hawkeyes will have their eyes set on getting more hardware in 2021-22.

The returning senior class has a 2019 Big Ten Tournament and regular season title already under their belt, but Murphy said the team is looking to improve this offseason.

“A lot of our emphasis over the summer is going to be over penalty conversions and making sure we put the ball in the goal,” Murphy said.

Iowa will get another shot against North Carolina to start the 2021-22 season as part of the Big Ten/ACC challenge. The Hawkeye field hockey season is slated to start in August.