Johnson County Board of Supervisors consider removal of MRAP vehicle

The Mine Resistant Ambush Protected vehicle was added to the Johnson County Sheriff’s department in 2014 and has responded to 19 total callouts in the county. 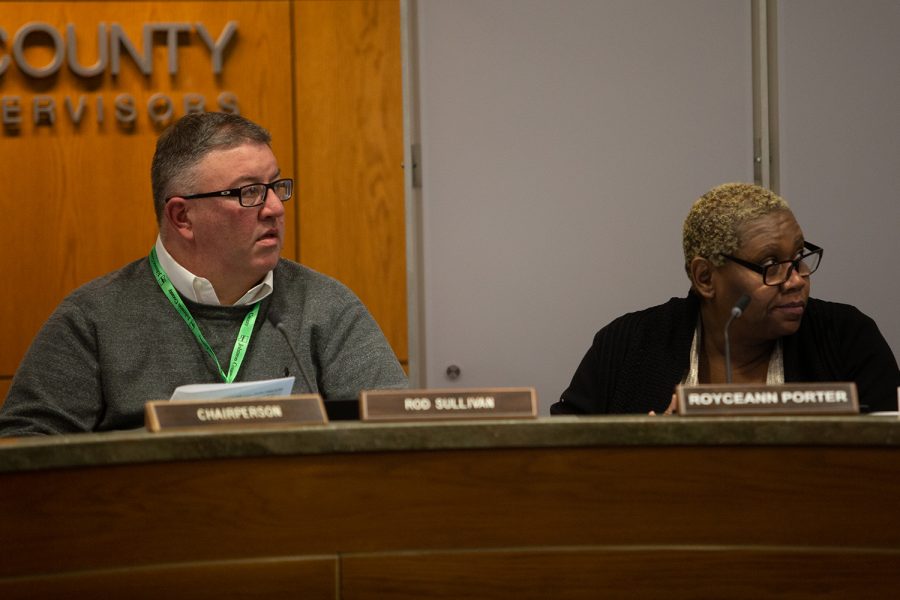 Johnson County Supervisors Rod Sullivan and Royceeann Porter listen to a presentation during a meeting on Thursday, Feb. 12, 2020.

Johnson County residents may no longer see the Mine Resistant Ambush Protected (MRAP) vehicle driving through their neighborhoods.

The Johnson County Board of Supervisors discussed the future, and possible replacement, of the MRAP vehicle – a recent subject of discourse among residents and the Iowa Freedom Riders on social media.

The MRAP vehicle was added to the Johnson County Sheriff’s Office in 2014.

The MRAP vehicle is designed to transport troops and to safely remove people during the presence of gunfire and explosives, Johnson County Sheriff Brad Kunkel said at the board’s meeting on Wednesday.

Kunkel told the board that the MRAP vehicle was assigned to the Johnson County Sheriff’s Office from the federal government through the 1033 program.

Two of the MRAP call-outs were for “standby” in downtown Iowa City during the protests in June 2020.

Kunkel told the board he’s not going to “stand here and second guess those decisions that were made” during the June 2020 protests.

The Iowa Freedom Riders requested the Iowa City City Council to write a letter to Johnson County officials in support of selling the MRAP armored vehicle, in a list of demands following the Black Lives Matter protests that summer, as previously reported by The Daily Iowan.

Porter said there has been no consistency of when and how the MRAP was implemented.

“I’ve seen many raids on the Taylor, Sandusky, Davis drive that they’ve done and the MRAP was not used,” Porter said.

“We need to have some sort of consistency when it’s used,” Kunkel told the supervisors. “But as long as I’ve been in office, it’s only been used for high-risk firearm-related search warrants.”

Kunkel said the alternative to the MRAP is the BearCat manufactured by Lenco. He said the BearCat is more desirable because it is more straightforward to operate.

“I have the money in the budget anyway, but I would certainly want to have that conversation on another day about whether or not we want to do that,” Kunkel said.

The Johnson County Supervisors had a majority consensus to request the Sheriff’s office to look into the possession of the BearCat.

Iowa City resident Dan Kauble, who has been outspoken on social media about the MRAP vehicle, said to the supervisors that while the BearCat alternative is preferable, he fears the Sheriff and county would shift from targeting BIPOC neighborhoods with the MRAP to do the same with the BearCat.

“County-owned heavy military equipment was being used to terrorize predominantly BIPOC neighborhoods,” Kauble said. “This has been occurring at a totally disproportionate weight rate to other areas of the county, and it is reflective of the problematic mindsets of Johnson County law enforcement.”

Iowa City resident Tara McGovern said to the board that local police do not need military tactical equipment, and the deployment of the MRAP creates unjustified and significant risks on physical and psychological well-being.

“The sheriff has not demonstrated an ability or a desire to be flexible or transparent, so it is unfathomable that you are seriously considering the procurement of still more tactical equipment when there is no reasonable oversight in place,” McGovern said.

Kunkel said if the offer to obtain a BearCat isn’t on the table, the MRAP will stay.

“What keeps me up at night is making sure my people have everything they need: the training, the tools, and the resources they need, so they can go home,” he said.