Iowa is among several Republican-led states that have made changes to their election laws since the 2020 election. Here are the changes that were made. 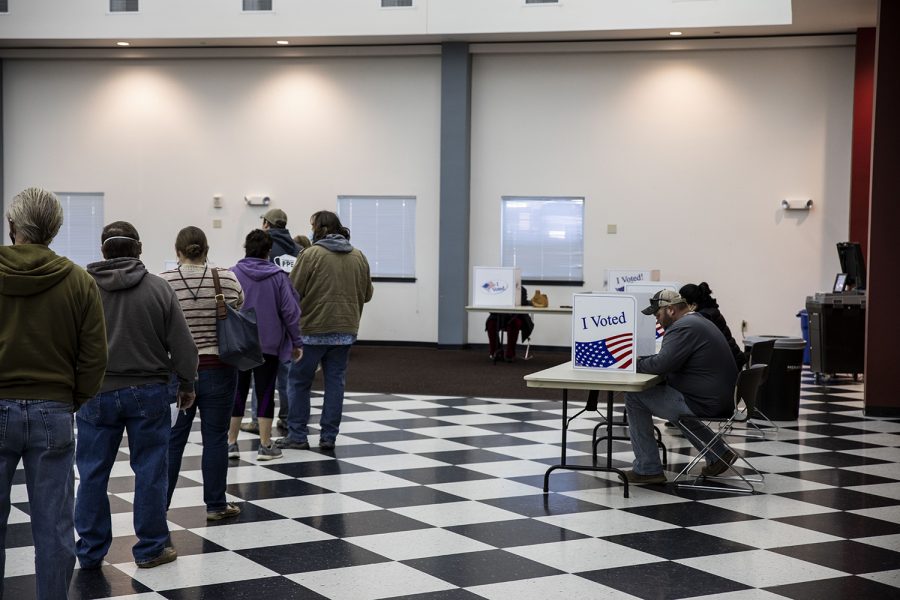 Iowa Gov. Kim Reynolds signed into law on March 8 a bill that reduces the time during which Iowans can vote in an election.
The Republican-majority Legislature’s changes, which passed on a strict party-line vote, include a shorter early voting period, an earlier due date for absentee ballots, restrictions on how many ballot drop boxes a county can have and who can drop off another voter’s ballot, and penalties for election misconduct.
The changes are in place and in effect for the 2022 midterm elections.

Iowa’s Republican-majority Legislature changed the state’s election laws this year after a general election with one of the closest congressional races in history, won by a Republican, that resulted in legal action. Democrats in the Legislature and some citizens who sued to stop the law opposed bills changing the law ut the changes, now law, will be in place for the 2022 Midterm elections.

Iowa isn’t the only state to make changes following the 2020 election. Governors in Florida and Georgia also signed laws that Republican-led legislators passed to update their voting processes. Arizona, Michigan, and Texas have also made moves to change their election laws.

In a February interview with The Daily Iowan, Rep. Bobby Kaufmann (R-Wilton), the Iowa House bill’s floor manager, said the changes to Iowa’s election laws are intended to protect the integrity of Iowa’s election system.

Iowa’s 2020 election attracted record-high voter turnout. The majority of votes — about 1 million of the state’s 1.7 million votes — was by absentee ballot.

Leaders of both the Republican and Democratic parties said Iowa’s election laws before and after the 2020 election were sound and made for great election integrity. But Republicans in the Legislature said that Iowans asked for the change, which Democrats disputed, and that 29 days to vote early was too long because too many mishaps could happen in that time.

A Republican-led Legislature already had shortened the early voting period in 2017, from 40 days.

Some Democratic legislators said during floor debate that shortening the early voting time period to 20 days will make voting harder for people experiencing mail delivery delays, and that voters who make a mistake on their ballot will have less time to fix it.

Sen. Janet Peterson, D-Des Moines, said on the Senate floor on Feb. 23 that she saw this as a voter suppression bill, because reducing the absentee voting period and limiting who can collect ballots makes voting more difficult for people with disabilities, or with complicated schedules.

“We should be doing more to open the doors of democracy, not chopping early voting in half from where it was just a few short years ago,” Peterson said.
Once polls close, absentee ballots no longer count
Iowans no longer will see a line outside of their precinct poll at 9 p.m. during general elections. They’ll see it an hour earlier when the new law closes the polls at 8 p.m. That will shorten the time to vote on Election Day by an hour, as Iowa polls will continue to open at 7 a.m.

Voters in line by 8 p.m. will be allowed to cast ballots and their vote will count.

Voters may seek absentee ballots 70 days before an election instead of the previous 120 days. And, they have to request the ballot. County auditors may not send absentee ballots unsolicited, or with prefilled personal information about the voter, although the Secretary of State’s Office could authorize sending blank ballots during a public health disaster.

Another aspect of the new law forces all absentee ballots to arrive at the local county auditor’s office before the polls close. Even if the ballot is postmarked before that date, the ballot will not count if it arrives after polls close.

Previously, absentee ballots postmarked by Election Day could arrive at the county auditor’s office by noon the following Monday and count.

Johnson County Iowa Republican Party spokesperson Karen Fessler said moving the ballot’s required arrival time makes the election more fair, because those voting in person only have until 8 p.m. and absentee voters should also be held to that standard.

Notably, though, this change means absentee voters do not have until 8 p.m. to vote.

In the 2020 election, county auditors in Iowa reported receiving more than 6,000 Iowa absentee ballots after Election Day that, with the new provision, no longer would count.
Changes to who can pick-up and drop-off another person’s ballot
Under the new provisions, a family member may drop off a relative’s ballot, and any registered Iowa voter may help a disabled voter deliver their ballot. In both instances, a registered voter who plans to turn in another’s ballots must fill out a form to verify their identity and present that form when they turn in the ballots.

Supporters of the law say that will ensure that voters’ ballots that make it to the ballot box are valid.
A change for dropboxes
Voters may place ballots in dropboxes now, but only in one designated dropbox that is under video surveillance per county. County auditors did not have the ability to set up drop boxes in their country before this law.

“I would also point out, there are approximately 1.3 million households in the state of Iowa, and almost every one of them has its own drop box: the mailbox,” Hall wrote in an email to The Daily Iowan. “There are also 4,000 blue mailboxes across the state that are available for anyone to utilize for requesting and returning their absentee ballot.”

Guidelines from the Iowa Secretary of State’s Office given to auditors in September for voting during the coronavirus pandemic said county auditors, who serve as county elections commissioners, could place a dropbox in one county building or on the building’s property, but nowhere else.

The law also says county elections commissioners no longer can choose where to place satellite voting locations. A petition with at least 100 signatures must be signed from people who are requesting that a polling location for it to be created. The elections commissioner also does not have home rule powers to make local election rules, the law states.
Penalties for election misconduct
The law says the state can issue a technical infraction against an auditor serving as election commissioner. The auditor could be fined up to $10,000 for an infraction. The Iowa Attorney General and local county attorney determine whether the auditor committed election fraud and pursue legal action.

The new law follows a lawsuit by the Trump presidential campaign against three Iowa auditors who sent voters absentee ballot request forms with pre-filled information last fall. The campaign won the case, which was heard in Johnson County District Court and later the Iowa Supreme Court.

The Secretary of State’s Office never told the auditors they could mail the pre-filled ballot request forms, the auditors said. However, Pate advised all of Iowa’s county auditors on July 17, 2020, to only send forms that did not have pre-filled information about the voter and his and her address.

Hall wrote that one person was convicted of election misconduct in 2020 and two have been convicted in 2021. However, other cases are pending but will not show up in Secretary of State Office records until there’s a conviction, Hall wrote.

Fifty-eight election law violations are on record since the start of 2010 in Iowa but there were more, Hall wrote. That is because violations are removed from the Secretary of State’s statistics if a conviction later is wiped from the defendant’s record for reasons that include deferred sentences.

“Deferred sentences are common in Iowa, and election misconduct is no exception. Therefore, I believe it is reasonable to infer that over the last decade some additional convictions have dropped out of the statistics due to defendants successfully completing the terms of their deferred sentence and having the charges removed from the record,” Hall wrote in his email.

Reynolds said in a media release on Mar. 8, that all of these additional steps promote more transparency and accountability that will give Iowans greater confidence when casting ballots.

The Daily Iowan, “The numbers behind this year’s closest Congressional race,” Nov. 30, 2020